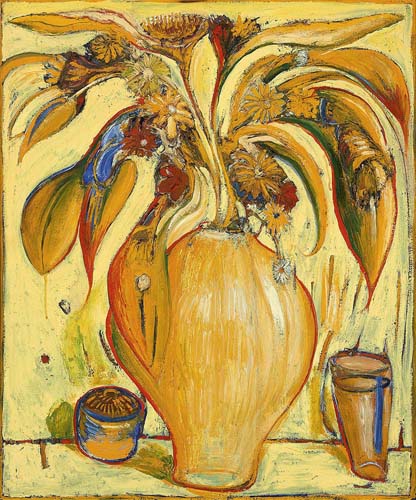 Brett Whiteley’s Chelsea Flower Show has a disarming provenance: for thirty-six years it hung in the private collection of his mother.

As first glance, and after reading its title, one is almost immediately tempted to see this dramatically foregrounded painting in reference to the famous English Royal Horticultural Society’s Chelsea Flower Show. Upon further consideration such a tempting connection seems far-fetched.

The painting’s aesthetic aura points to a more sensational and differently cultivated source: New York’s infamous Chelsea Hotel. Considered in this way, the painting’s subject matter (a vase of wilting flowers on a narrow shelf or table edge) and double-meaning title act as subtly sardonic referents to its refined English horticultural counterpart. The tripped-out lassitude of the present painting points to a Chelsea Flower Show of a different sort. This is Whiteley at his most subtly ironic and at his most subjectively revealing – the painting sighs rather than pulses and its hidden significance lies in its seismographic register of the artist’s state of mind during, or recollected shortly after, his time at the Chelsea Hotel.

The twelve-storey Chelsea Hotel (when it was built in 1883 it was New York’s tallest building) was located at 222 West 23rd Street between Seventh and Eighth Avenues in Lower Manhattan, New York. It was sold ($81 million) in August 2011 and is currently undergoing controversial Gene Kaufmann designed “upscale” renovations and is due to reopen in 2016.

Whiteley, with a Harkness Scholarship under his belt, moved into the old artistic dowager of a hotel with his wife, Wendy (born 1941) and daughter, Arkie (1964-2001) in 1967. He left New York in July 1969 in great haste and severe disappointment (according to his wife he suffered a “type of nervous breakdown”) to live in Fiji at Navutuleva Village, about two hours drive from Suva the island’s capital. Wendy and the couple’s five-year-old daughter joined him about two months later. They lived simply and happily and soaked up the freeing solitude of their tropical island retreat after the emotional turmoil and everyday bustle of New York. However, a little over five months later their blissful stay was abruptly cut short by an early morning drug search undertaken by the Fiji Police, who responded to a local tip-off. A small amount of marijuana was found and the Whiteleys were subsequently arrested, fined £F50, and ordered off the island to face a hounding press and front-page infamy upon their return home to Sydney in November 1969.

Back in Sydney, Whiteley seemed to find some form of private relief and artistic release at his Lavender Bay home and his paintings there are characterised by an observational acuity and a contented visual pleasure. His lyrical paintings of the time were created much more in the manner of the French artist Henri Matisse (1869-1954) and present untroubled vistas that act as informal feasts for the eye. They all possess an easy charm, radiate domestic calmness and distantly recall the optical warmth of the indoor scene paintings of the Intimist school in Paris by French artists such as Edouard Vuillard (1868-1940) and Pierre Bonnard (1867-1947), both of whom, like Matisse, believed that overly grand subject matter in art was somewhat pompous and greatly overestimated.

For them, pure painting had to speak with a painterly accent (vide the German concept of malerisch) that sprang from the personal perception of simple daily events and observations through the operation of a refined sensibility. During this pivotal period, between late 1969 and mid 1970, Whiteley came to more keenly appreciate the artistic value of modest subject matter – he turned to pictorial themes that were quite different from the pent-up energy and expansiveness of his New York paintings. After this time, new subject matter such as birds with nests, fragments of magnolia blossoms, a vase of flowers, the fruit on a plate and the arrangement of a table were all imagistically caught and carried off with a type of visual ease that always stressed seemingly effortless deftness and just-so compositional finesse.

The essential point of the above contextual outline is to establish that the content and painterly bravura of Chelsea Flower Show of circa 1970 owes much to the artist’s emotional turbulence in New York and that it heralds a change in Whiteley’s subject matter. In other words, the painting acts as a pointer toward a new artistic and thematic direction. It was a direction forged somehow and somewhere between the charged-up energy of New York in 1969 and the reflected-upon serenity of Sydney in 1970.

Whiteley’s Chelsea Flower Show shows a large ovoid vase containing a number of flower and leaf stems. The most notable feature of this frontally composed arrangement is that the overwhelming use of yellow ochre dominates the composition to the point of robbing the depicted leaves of almost all of their normal green colours. Obviously, this contagion of yellow tones is closely related to the use of the colour Mellow Yellow in Whiteley’s Gauguin of 1968, also painted during the Chelsea period, which was sold by Menzies in July 2014 (lot 40) for $1, 718,182 (including buyer’s premium).

There is, however, yet another and more significant connection. In 1970, Whiteley was a constant visitor to The Yellow House in Macleay Street, Potts Point. The artists’ collective was set up by Martin Sharp (1942 – 2013), Greg Weight (1946 - ) and George Gittoes (1949 - ) as a nod of artistic respect to the house where, in 1888, Vincent Van Gogh lived in Arles and where Gauguin visited him (the house was much later lost to Allied bombing in WWII). It was also where Van Gogh painted his famous Sunflowers 1888 – one of the world’s most loved paintings. Looking at the two, the iconographic connection between Whiteley and one of his favourite painters is all but irresistible. Both paintings (Van Gogh’s and Whiteley’s), though distant in time, are linked in their two-part flat background, pictorial form, subject genre, foreground placement and colour choice – it is as though Whiteley was moved by admiration and empathy, just as he was in Gauguin’s case just two years earlier. Whiteley’s Chelsea Flower Show is not a direct emulation of Van Gogh – a case of trying one’s hand against a master – but is more of a revealing example of his remarkable ability to engage and enter into a mental pairing with those he admired.

The place-in-time uniqueness of Whiteley’s Chelsea Flower Show allows for no direct comparisons with any other of his works. Yet, there is little doubt that its signal-like turning point significance spearheaded Whiteley’s new field of limited in number everyday genre paintings in the Seventies, the most obvious of which are Still-life with Meat of 1975 in the Art Gallery of New South Wales Collection; Still-life with Cherries of 1975 in a Sydney private collection; Still-life with Three Lemons of 1976, in the Richard and Arija Austin Collection and Magnolia of 1977 in a Sydney private collection.

The University of Melbourne

Pearce, B., Brett Whiteley, Art and Life, Sydney, Thames and Hudson and The Art Gallery of New South Wales, 1995.