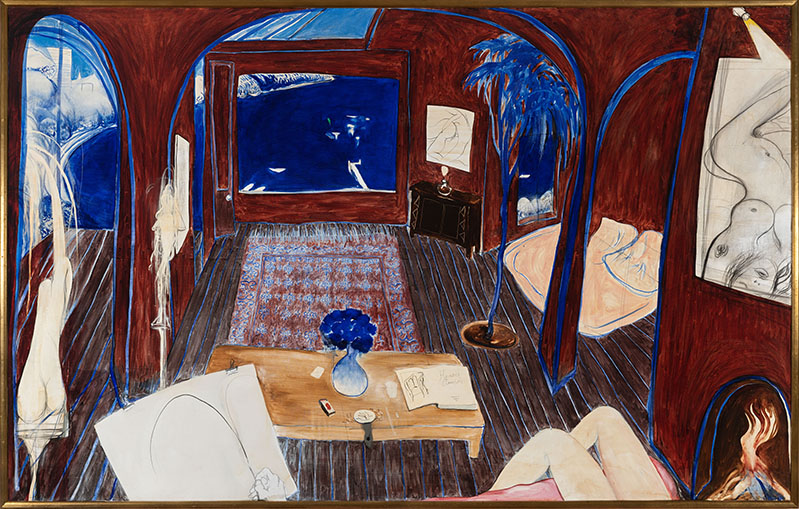 While he knew that a painter’s ‘best spokesman’ was their work, Henri Matisse (1869-1954) still went to great lengths to explain his creative process. In 1908, he recorded his thoughts about order and clarity, the way a work of art should be ‘harmonious in its entirety’ and its entire arrangement combined to an expressive whole.

‘What I dream of,’ wrote the artist, then 39 years old, ‘is an art of balance, of purity and serenity, devoid of troubling or depressing subject matter, an art which could be for every mental worker, for the businessman as well as the man of letters, for example, a soothing, calming influence on the mind, something like a good armchair which provides relaxation from physical fatigue.’1

So runs one of the most best-known passages in one of the best-known manifestos in art. Matisse’s essay, Notes of a Painter, in which he reflects at length on the need to condense pictorial meaning into ‘essential lines,’ has been quoted and misquoted for decades by artists, students and scholars. It was inevitable, too, that these words would one day make their way into the thoughts of a thirtysomething Australian painter named Brett Whiteley, who admired Matisse almost as much as Matisse admired Cézanne (1839-1906).

It was midway through the 1970s and Whiteley had found himself at a moment of transition. As a young man he had enjoyed rapid success in Australia and Europe. He had launched himself on New York for a brief period of turbulence and then, upon the expiration of his American dream, found a kind of respite in Fiji. In late 1969, when he returned to Sydney, settling with his wife and daughter in a house at Lavender Bay, he quickly made a name for himself as an urgent, flamboyantly talented artist.

But Whiteley’s priorities were shifting. He had spent years burning with passion about the world around him; now, in the early stages of an addiction that would eventually claim his life, he was turning inward. But as one intoxicant took hold, another more meaningful form of euphoria loomed in the form of Lavender Bay itself, both inside the house and outside, past the palm trees and Moreton Bay fig, across the harbour towards town.

‘I am not interested in trying to record the way one thinks,’ he said. ‘I am interested in beauty, which can best be described as being on time for an appointment. Nature tells you what to do.’2

As he began this pursuit, Whiteley invoked the example of Hokusai (1760-1849), referring in particular to the way the Japanese printmaker had turned, again and again, to Mt Fuji as a subject matter. Lavender Bay had become a refuge of sorts for Whiteley: could it also guide his hand into a fresh form of expression? He looked around. Spread out before his eyes was a rich, bounteous point of reference that would allow his imagination to soar. Without having to search repeatedly for a subject – the same search for Hokusai may have ‘trespassed on freedom’ – here was a way he could focus his creativity on his immediate environment. The challenge, as he saw it, was to ‘take to bursting points the hints that nature give’. He wanted to make ‘accurate records of the dream that I experience in the presence of reality.’

Whiteley had long felt ambivalent about his home town. His decision to leave, some 15 years earlier, had been in part driven by a desire to escape the ordinariness of Australia, a country that at one time felt unsophisticated, sleepy and a desperately long way from the rest of the world. But from this perspective, casting out from the lower north shore of Sydney, he saw a metropolis growing in confidence and beauty. ‘This is a very, very good city,’ he said. ‘A perfect size for a city.’3

The scene outside his window was impossible to resist. ‘Optical ecstasy’ were the words he used to describe the rush of ultramarine blue, the light, the water, the birds and the boats darting past. So he painted the harbour, but he also painted the interior as well, assembling studio items alongside various glimpses of domestic life. One of the first instances of this occurring can be seen in his 1974–75 painting, Henri’s Armchair, where Whiteley captures a moment of stillness and calm inside the family home at 1 Walker Street.

The painting pulls together the various elements of Whiteley’s world: interior and harbour views, a nude sketch, an erotic drawing, a sculpture of a palm, cornflowers in a vase, wooden floorboards, a rug. In the foreground a hand is drawing the outlines of what looks like a woman’s body – perhaps his wife, Wendy, whose legs extend from the couch in the corner, reinforcing the sexual energy that shimmers below the surface of this scene. On the table Whiteley has placed a box of matches and a notebook open to two pages: a drawing of a chair and two written words, ‘Henri’s Armchair’. Ultimately the eye is drawn to the back of the room, beckoned by the languorous elegance of Sydney Harbour, its individual elements reduced to those brisk white lines that Whiteley connoisseurs would come to know so well.

Two colours dominate the painting, echoing the words of Whiteley himself as he set out on the Lavender Bay series: ‘Almost all the works have been rendered in a lyrical + personal style where colour, hitherto largely ignored or downplayed, has this time been used in saturation, particularly a Brahmsian plum + a stinging clean ultra-marine blue.’ The work also stands tall beside other Lavender Bay meditations that harness the spirit of Matisse, including My Armchair, Self Portrait in the Studio and Interior with Time Past, winner of the 1976 Archibald and Sulman prizes respectively.

One clear inspiration was Matisse’s 1911 oil, The Red Studio, in which the French artist saturates his studio in the colour red alongside a small retrospective of recent work. Whiteley was always open about his creative debts, especially when it came to masters he adored such as Matisse and Vincent van Gogh (1853-1890). Indeed, when he spoke about these painters, it was often with the casual familiarity of close friends, such was the intimacy he felt with their lives and their work.

His homage to Matisse was made even more explicit and deliberate with the title he chose for this new painting. With Henri’s Armchair, Whiteley links arms with Matisse via that 1908 essay. His famous phrase – ’something like a good armchair’ – has ricocheted through art history, even if the artist’s original meaning is not always precisely understood. Matisse biographer Hilary Spurling writes about the artist wanting to neutralise the violence of the world with the ‘serene power and stable weight of art’. She also quotes a Matisse associate, Michel Puy, with an observation that could well have been spoken about a certain Sydney painter working on the other side of the world in the second half of the twentieth century: ‘Nothing is stranger in an artist so impassioned, so vehement and so tormented, than this longing for tranquility.’4

Whiteley had looked up to Matisse since he was a young artist, back when he looked to Europe and America, hungry for new experiences and revelations. In the early 60s, while living in London, he had asked his mother, then in New York, to buy ‘the biggest reproduction available’ of The Red Studio from the Museum of Modern Art. Later, when in Manhattan himself, he made repeated visits to MoMA to see this and other pictures by Matisse. He made no secret of his respect, calling Matisse the greatest painter of the 21st century and ‘one of the most deliberate’ artists since Piero della Francesca (c1415-1492).

Whiteley’s achievement with Henri’s Armchair was noticed at once. One of his favourite living painters, Lloyd Rees (1895-1988) – another artist known for his Sydney Harbour visions – sent him a telegram calling it a ‘masterpiece’.

The first exhibition of Lavender Bay paintings was held not in Sydney but Melbourne, a testament to Whiteley’s affection for Stuart Purves and the Australian Galleries. It was November 1974, and the artist was feeling positive about the work on display: ‘The paintings in this new exhibition begin from the premise of recording the glimpse seen at the highest point of affection – points of optical ecstasy, where romanticism and optimism overshadow any form of menace or foreboding.’ Eleven months later, Sydney audiences were given the chance to see for themselves a body of work that had revealed, according to one critic, ‘real maturity and stature’.5 Whiteley, meanwhile, settled into his new theme, away from the glare, transforming his home into his studio and Lavender Bay into art.

Ashleigh Wilson is the author of Brett Whiteley: Art, Life and the Other Thing  (Text, 2016).