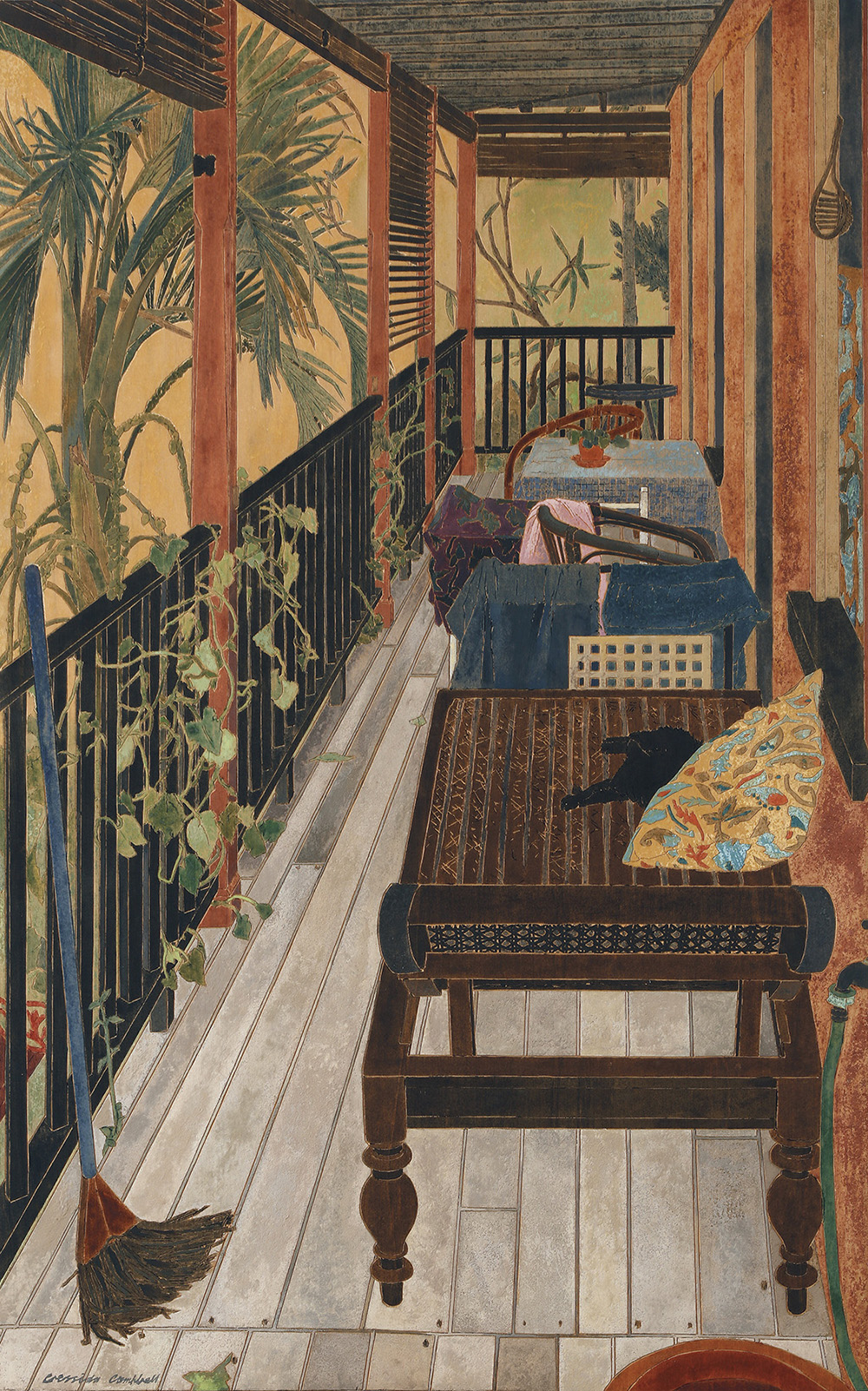 By BRETT BALLARD
Lot:
The Verandah

Now that Cressida Campbell has so completely emerged and has achieved her place as one of Australia’s most important artists, it would be impossible to conceive of another painter so involved with the lived environment. Campbell’s paintings are well known for their beautiful objects that she meticulously renders and orders into striking compositions.

Her metier is both painter and print maker and under these headings her work finds a unique expression. Campbell applies watercolour to a wooden panel that she has drawn onto, and incised. It is a careful, demanding technique that relies upon observation and fidelity. Once the image is complete, Campbell applies a spray of water to the surface to activate the paint, and then makes a unique print. It is a sophisticated process, yet describing it belies the expertise that Campbell brings to it, such is her experience.

The block and the print are the mirror of each other and a fascinating twinning of Campbell’s intentions. To see both together is a revelation. Each has a different point of view, but both retain the beauty of Campbell’s art and her subjects: the interior, still life, the verandah and harbour.

Campbell has various influences. One thinks of Australian female painters, Margaret Preston (1875-1963) and Grace Cossington Smith (1892-1984) and French painters, Henri Matisse (1869-1954) and Pierre Bonnard (1867-1947). There is also Campbell’s collection of prints, drawings and ceramics that inform her practice and often appear in her paintings. Henri Matisse aptly describes this:

My purpose is to render my emotion. This state of soul is created by the objects which surround me and which react in me… I express the space and the objects in in it as naturally as though I had only the sea and the sky in front of me: that is the simplest thing in the world.1

The Verandah 1987, our present lot, is the entry point into Campbell’s landscape. It is an early and important verandah painting of a series that was immediately accessible and iconic. The Verandah is prominently illustrated as a print in Cressida Campbell’s monograph and was subsequently made into a screenprint. Verandah with Washing 1997 (private collection) is a contemplative and quiet painting that is at once domestic – with its drying rack, potted plants, and day bed – and restive.

The virtue that Campbell found in the vertical format and long view of Verandah with Washing she takes into the subsequent print, Francis Street, East Sydney 2000 (National Gallery of Australia collection, Canberra). This exceptional image has a compositional poise and complexity that the eye does not tire of. The viewer steps through the composition: the immediate foreground introduces Campbell’s still life of jug, bowl, and table; and to the balcony, with its decorative iron rendered in black; and to the attendant straggly gums that rise from the street and garland the picture’s main view. Beyond, the deep streetscape is visible, and artfully placed, at the centre of the composition.

The portrait format of Francis Street, East Sydney and indeed The Verandah proves durable and allows Cressida Campbell to create long views, and to use windows, doors, and open balconies to filter, as Robert Hughes has suggested, inside and outside. This puts us in a place of security, able to view the world beyond. No less, the apertures are themselves paintings, within the larger painting.

The Verandah in fact, draws us nearer than our previous paintings and is more immediate in scale – somehow life-size – and therefore more intimate. It is the quality of the painting that has eluded our grasp but in this moment the painting’s effect has become tangible, spatially but also by proximity. An effect, I suggest, not easily seen but felt.

There are wooden and weathered elements to the painting. The details are in the floorboards and the beautifully incised slats of the blinds. A daybed, a drying rack, and table and chairs, line the view. They marshal the eye to the end of the balcony, and beyond, to the trees and palms. It is Lynne Drysdale’s (daughter of Russell Drysdale) balcony and home, and Campbell is in residence to paint, as she has done before in other homes.

The Verandah is an important addition to Cressida Campbell’s painting in the public domain. As well as the unique print of the image and the edition of screenprints, The Verandah has never been exhibited and has remained in the same collection since 1988. I can make no higher recommendation of The Verandah than to be present on the balcony, with the many things that delight, and take pause.