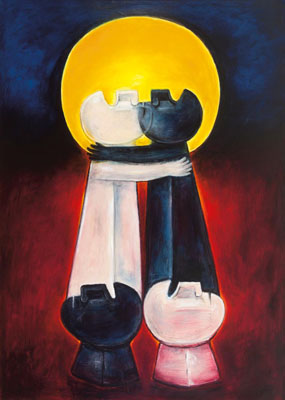 Reconciliation, painted by David Boyd in 2001, represents the continuation of an important theme that had preoccupied the artist his entire life.

In 1961, David Boyd became the winner of the Italian Government Travelling Art Scholarship Award for his painting, Monoliths. This award, won the previous year by Brett Whiteley (1939-1992), and before that by Sidney Nolan (1917-1992) enabled the artist to travel, but more importantly, as one of the most prestigious awards of the time, it was a major mark of success and confirmed David Boyd as an artist of eminence and high standing, not only in Australia but overseas as well.
Boyd was already of some eminence before this however, as a member of the celebrated Antipodeans (John Brack, Charles Blackman, Arthur Boyd, Robert Dickerson, Clifton Pugh, John Perceval, and Bernard Smith) and as a participant in the major Australian art event of the era, The Whitechapel Gallery in London’s 1959 show of Recent Australian Painting. David Boyd’s work of this era, like his brother Arthur’s (Arthur Boyd 1920-1999), asserts independent thought on matters that are important to the community of artists in Melbourne, artists in Australia, and in matters that are important to all Australians.

He is exploring… an expressionistic vision to the interpretation of Australian myth and history… giving expression to …deep rooted feelings of guilt. It is this tendency to probe into the more hidden parts of the national consciousness which gives (his) art a dignity and authority quite lacking in the work of those local artists who are content to follow overseas fashion.1

Monoliths shows, in the pared-back style Boyd was becoming well-known for, figures in an embrace. They grapple, clinch, grope, fight, love, and embrace: in our parlance of 2015 we might call it a non-specific physical encounter. It is open to interpretation and therefore powerfully evocative. The figures are rigid, and the title of the painting re-enforces the notion of intractable immobility. And yet the figures are fluid and organic too. Boyd relishes the ambiguity as it coincides with his own politically independent stance. In few artists are the contradictions of commitment and distance as evident, although Boyd is himself aware of it, and cites Goya as an artist who is able to combine ‘the dual function of protest and court artist’.2 Reconciliation like Monoliths, and the numerous variations and versions that originate from it, combines a stark and yet balanced visual message: Black and White, equally weighted, mutually dependant, integrated, are presented as a unified entity. Like Nolan with his Kelly mask, Boyd has struck upon a symbolic image, an icon, which has the capacity to adapt to a number of themes and therefore become universal. Later compositions incorporating the twinned figures with a moon and with other accoutrements are more or less unambiguously critical of life’s inequalities, either of things such as the legal system (The Trial Series), the status of Aborigines in Australia (The Tasmanians), or The Establishment (Church and State series). All of these are about injustice.
Reconciliation reminds us that in the interval since Monoliths of 1961 some things have remained unchanged: injustices still occur and it is the artist’s role to remind the world of what can happen when the equilibrium is neglected and balance swings away from the natural order.