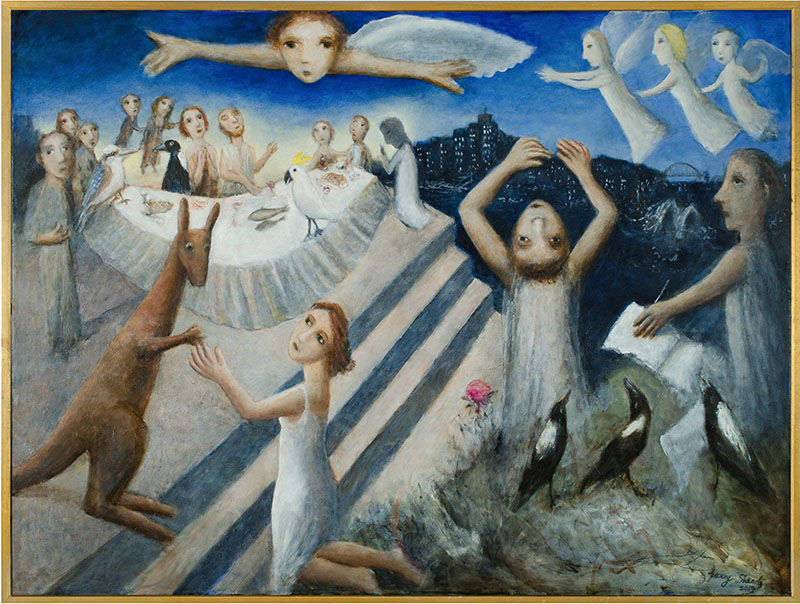 The Divine Comedy by Dante Alighieri is universally accepted to be one of the greatest works of Western literature. Written as an epic poem in 14th-century Italy, it is an imaginative vision of the afterlife and traces the journey of Dante from darkness and error to the revelation of the divine light, culminating in the Beatific Vision.

In Garry Shead’s painting, Dante’s Vision, the central characters of Dante’s narrative are transported from medieval Florence to the glistening shores of Sydney Harbour.1 Shead presents a parallel vision of romantic yearning and divine inspiration, while conveying essential truths about the human experience.

The Divine Comedy is narrated in the first person by Dante; a man mid-way through his life, who has longed to be reunited with his muse, the beautiful Beatrice, since her death at the age of twenty-four.  The poem opens with Dante walking through a dark wood, when he is assailed by three beasts.  Disoriented and fearful, Dante is rescued by the Roman poet Virgil, and together they embark on an arduous journey through Hell (Inferno) and Purgatory (Purgatorio), before Dante is reunited with Beatrice in Heaven (Paradiso).

Shead’s painting Dante’s Vision is a vital reimagining of that journey and loosely depicts the far side of the world, the Antipodes, with an ascent of Mount Purgatory towards Heaven.  After successfully navigating the seven terraces of sin, Dante approaches the summit, while in the foreground, Beatrice encounters a kangaroo.  Elsewhere, heavenly figures assemble for a celebratory Last Supper.  Their unlikely dining companions are a kookaburra, cockatoo and magpie: quintessentially Australian birds that are a near constant presence in Shead’s art.  Celestial beings float ethereally in the night sky.  Sydney’s glittering skyline lies beyond, with the Harbour Bridge forming a silvery arc on the horizon.  On the right, an enigmatic figure bears a pencil and paper. Perhaps this is the poet Dante.

Although the Divine Comedy hovered in the background of Shead’s oeuvre for many years, it was in 2014 that he was ready to burst forth with a major exhibition of paintings.  Coincidentally, a modern translation of The Divine Comedy by the acclaimed Australian poet and critic, Clive James (1939-2019), had been published the previous year.2

Over the last seven hundred years, The Divine Comedy has proven a fertile source of inspiration for major artists such as Gustave Dore, William Blake, Eugene Delacroix and Salvador Dali to name a few.

Dante’s Vision forms part of this broad tradition and is a key work in Shead’s current series.  In transposing Dante’s narrative to an Australian setting, Shead draws our attention to the sacred in our everyday; the profound in the seemingly mundane.3 Like Dante’s original poetry, Dante’s Vision attests to the all-enduring and all-powerful nature of love, both romantic and divine. Inspired by Dante’s profound and beautiful narrative it unites a broad range of ideas and emotions, and it speaks to us of our extraordinary times.