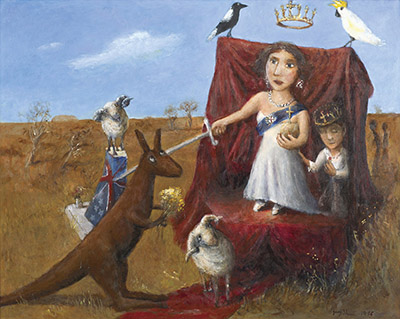 By Professor Sasha Grishin in Blog

The Royal Touch was painted in the same year as Ceremony,1 in 1996. The two paintings are of identical dimensions and are two very significant paintings in Garry Shead’s Royal Suite series. Both are set against the dusty red earth of central Australia, with Uluru somewhere on the horizon. In both, a strange ceremony is taking place, presided over by Her Majesty Queen Elizabeth II, in full regalia and enthroned on a red carpet, accompanied by her royal consort, Prince Philip. Both paintings also capture the bleaching intensity of the Australian sun with superbly painted luminous blue skies and a few floating clouds reminiscent of the skyscapes of Arthur Streeton.

On first encounter with this royal iconography, many elements appear enigmatic, even slightly incongruous, despite the pictorial clarity with which the artist has defined the imagery. While the participants at once appear recognisable through their various attributes and insignia, there does not seem to be a single coherent narrative. Instead, there are several competing narratives – both public and private – brought lovingly together under the glare of the all-encompassing Australian sun. If one studies the pictures more closely, even the identities can prove ambiguous and slightly problematic. The monarch may appear in the guise of the young attractive queen who visited the country in 1954, but also has more than a passing reference to the features of the artist’s mother, while the kneeling consort, who with his eyes closed touches the queen’s dress with child-like devotion, may have some resemblance to the features of the young
artist himself.

On the 3rd of February 1954, when Garry Shead was twelve years old, the twenty-eight year old Queen Elizabeth II became the first reigning monarch to visit Australia. Garry’s parents took him on a journey to Mosman, where they camped overnight in order to watch the royal liner, Gothic, enter Sydney Harbour. They were amongst the estimated half a million people who lined the headlands to welcome Her Majesty. On the 5th of February 1954, Garry’s school, the Shore School, travelled to the Sydney showground to welcome the Queen. That day some 120,000 children were gathered in three vast groups – at the Sydney Cricket Ground, the Sydney Showground and at Centennial Park – while Her Majesty, wearing a stately gown of deep cream embroidered at its hem’s length with a floral wattle design, rode slowly by in an open car. It was on that Friday morning, at about 10.30am, that Garry Shead caught a glimpse of the queen. More than forty years later he recalls the experience: ‘I remember seeing her and feeling the eye contact as she passed. I also remember dreaming about her (sometimes sexual dreams) – there was possibly nothing sexy about her, she was like a Walt Disney Cinderella, but I encountered her at the dawning of my own pubescence. There was something unearthly and untouchable in her beauty, a sort of ‘Noli Me Tangere’, so that even a prime minister could not touch her elbow. She passed like an incarnate spirit.’2 The royal visit of 1954 marked a symbolic watershed in Australia’s nationhood. In the Queen’s speech on arrival in Sydney she expressed her satisfaction that she was able to ‘meet my Australian people as their Queen… Only 166 years ago the first settlement was made, not far from where we stand, by Captain Phillip and his small band of Englishmen, and now there stands a fine city that has become famous throughout the world.”3

To the twelve year old Garry Shead, the white goddess appeared as someone slightly unreal. This fleeting regal vision came from a place that was far away both in time and space and belonged on a level to which mortals could not hope to aspire. Yet at the same time there was a latent awareness of her desirable sexuality, a dream-like fantasy. The artist later recalled ‘I associate the Queen with my mother in a way — she looks like the Queen’4 and in The Royal Touch the artist presents himself kneeling in homage before his white goddess, while the reassuring presence of his mother watches over him. In a volume of Shead’s working notes, clippings and drawings titled on the spine The Royal Series 1995, next to a medallion portrait of the Queen in an entry called ‘The Secret Journal of the Queen’, he wrote: ‘Being my secret test[imony of] my own thoughts and feelings from my coronation to the visit to Australia in 1954. Cast in eternal images by my court painter Garry Shead who is free to court or pay court or be a court painter in the manner of Velázques or Goya.’ Below are glued two matchbox photographs of the koala bear, and below these is another medallion portrait, this time of Prince Philip with the inscription: ‘Being an addendum to my beloved queen’s book from my point of view, my thoughts and feelings of being a consort to her majesty and husband to her children from the marriage to the coronation and thereafter the visit to Australia in 1954. I commend the court painter G[arry] S[head] to faithfully portray these secret images for posterity.’5 This page in the artist’s scrapbook signifies a point of entry into the images of the royal progress, her majesty has appointed him as official witness to the public and private life of royalty, while Prince Philip commends the artist to play the role of his surrogate, to convey his private thoughts and feelings.

Although Garry Shead could be broadly described as a republican and his Royal Suite paintings promptly entered the Australian republican debate of the late 1990s, this was not the primary intention of the series. It had been a long time in the making, in fact about forty years, and employed the metaphor of the royal visit of 1954 to explore a wide range of themes. Implicit in the series is a discussion of childhood sexuality, the oedipal complex with the related patricidal wish and the desire to reclaim the queen. Also implicit in the series are the Jungian notions of heroes and journeys, a spiritual quest for the new Holy Grail, connected with perhaps a not totally pure or blemishless royal presence. In a sense they are also history paintings, looking back to the Australia of the 1950s when the omnipresent figure of Menzies dominated so much. Lurking in the background is an awareness of the cold war and the Petrov affair, John Anthill’s pioneering ballet Corroboree, which was commissioned for the royal visit and which brought the heritage of Aboriginal music and dance into mainstream cultural life, and also the whole complex tapestry of Australian society of the time. The Royal Suite paintings reflect something of a naive innocence of vision, something which was possible when seen through the eyes of a twelve year old boy.

In The Royal Touch an element of farce prevails, as the Queen holding the Sovereign’s Orb appears to ceremoniously knight a large-eyed kangaroo holding a sprig of wattle, while a magpie and sulphur-crested cockatoo flank the royal crown which hovers over the queen’s head. Two sheep appear in the foreground as somewhat quizzical loyal subjects. There are also two Indigenous people hinted at, rather than clearly articulated, behind the royal enclosure, present, but not in the royal presence. However the dominant mood is one of sensuous lyricism and a celebration of child-like innocence. Garry Shead is one of the finest romantic, lyrical figurative artists to have worked in Australia. Through his outstanding technical mastery in this painting, he creates a work of visionary power which is of a very high order.