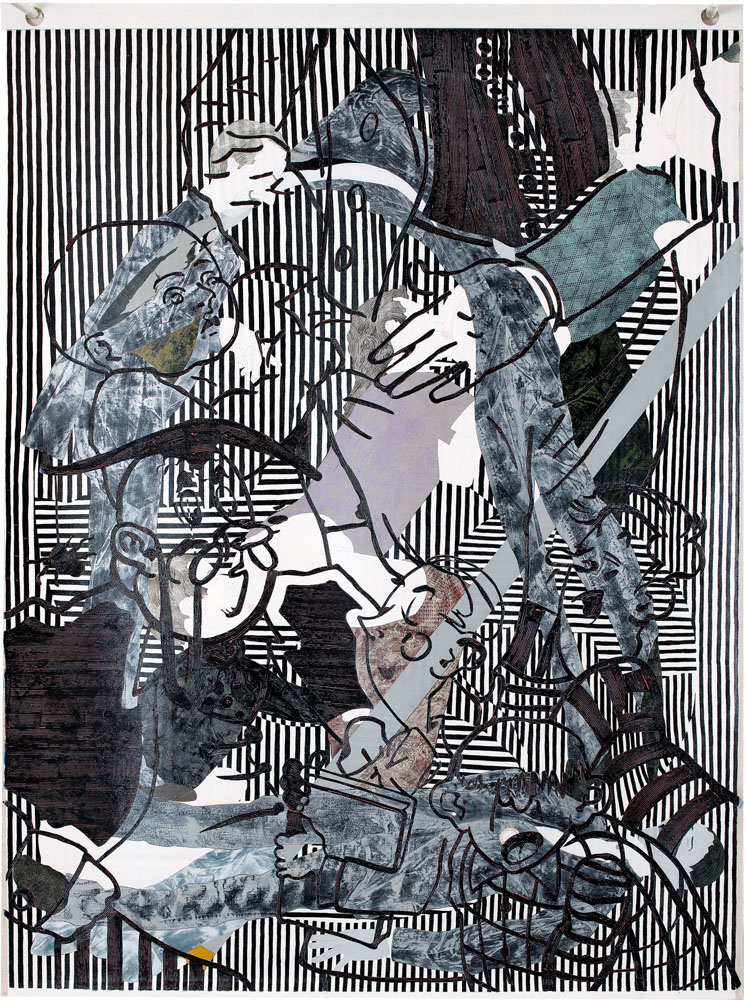 Helen Johnson is quickly becoming one of Australia’s brightest artistic talents. Her works have been exhibited at major Australian and international institutions, including the Institute of Contemporary Arts and the Tate Modern, both in London.

The work is quintessential Johnson. We see a characteristic large-scale, unstretched, suspended canvas that is deeply layered, with multifarious imagery and careful composition. The unusual treatment of the canvas makes Johnson’s work demand both visual and physical engagement. This technique results in a work that constantly redirects viewers and encourages endless interpretation.

Ends, unlike Johnson’s well-known focus on Australia’s colonial past, presents a more intimate side of Johnson and examines her personal and family history, contemporary politics, and explores the very nature of paintings and their creators.1

In Death Painting, we are presented with a melee of interlaced, ‘high society’ comic figures on a shifting plane of black and white stripes. These figures converge on three central characters engaged in a sexual act, forcing a dialogue between modern society and a conservative past.2 The flatness of these figures allows for a fluid movement between layers and meaning.

A comparable work to the present painting is Seat of Power, from Johnson’s Warm Ties Series, exhibited at Artspace Sydney (2018) and the Institute of Contemporary Arts, London (2017). Seat of Power (acquired by the MCA and Tate, London) focuses on British influence in Australian politics. The main text is pinned down by eight ‘bare, white arses’ that share a visual similarity to the central figures in Death Painting.3 It is suggested that such imagery not only reveals the disrespect of colonial politics, but also speaks to the power of bodily imagery to shock Australia’s conservative middle class, as seen in the works of Juan Davila.4

Johnson’s solo exhibitions have been gaining momentum internationally, with shows recently held at Château Shatto, Los Angeles (2021), Pilar Corrias, London (2019), and a commissioned work for Art on the Underground, London (2021). Her works also feature in prominent and permanent collections, including the Collection Mario Testino.

2022 is an anticipated year for Johnson, with a forthcoming solo exhibition at Yuz Museum, Shanghai as well as a joint commission with Judy Watson at the National Gallery of Australia supported by the late Australian art philanthropist Neil Balnalves.