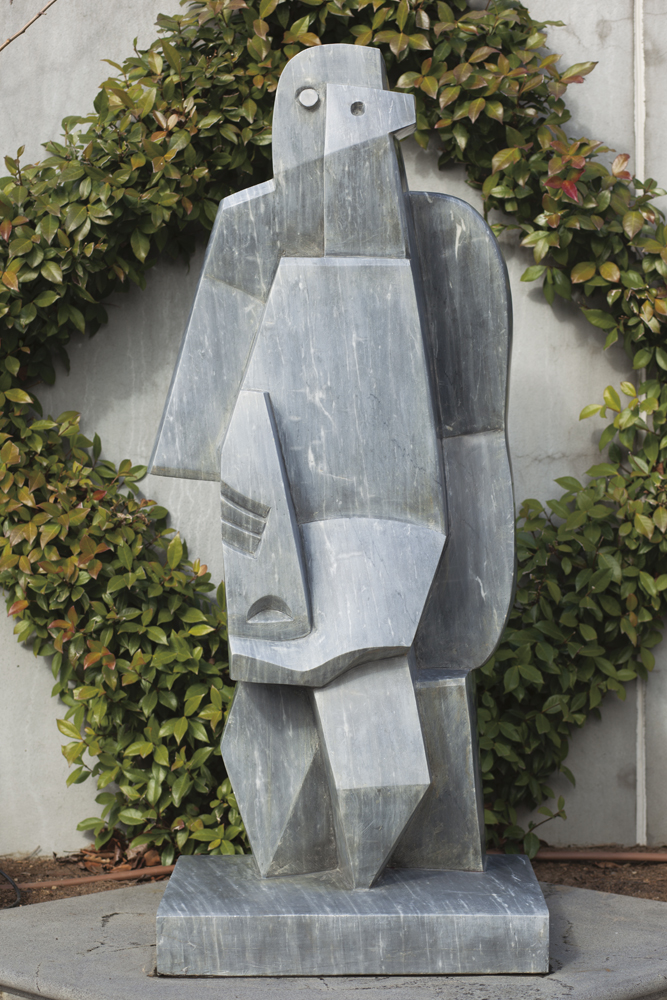 Cubism was the most important art movement in the last Century and art historians now agree that Jacques Lipchitz was the first Cubist sculptor. 1.

Lipchitz’s sculptures have always been very highly regarded and the incisively perceptive Pablo Picasso was one of their earliest admirers. The art world’s more astute connoisseurs and discerning collectors have recently reappraised Lipchitz’s role in Cubism and interest in his work has skyrocketed. This is most recently exemplified in the US$2,165,000 (AUD$2,937,000) price paid for Lipchitz’s 86cm. bronze sculpture Marin à la guitar (Sailor with a Guitar), one of an edition of seven, at Sotheby’s in New York on 4 November 2014.

In many important ways Lipchitz was the “sculptors’ sculptor”. He lived a remarkably dedicated life and was responsible for disseminating the refined three-dimensional beauty of Cubism wider and further afield than any other sculptor of his time. His was a long, highly productive and distinctive artistic path – it was also a personal and creative journey that, it must be noted, was traumatically interrupted by the unmitigated tragedies of two World Wars.

Jacques Lipchitz was especially prominent in that particular group of highly creative Northern and Central Europeans in the first decade of the Twentieth Century whose members, though born and schooled in various foreign cities, came to see Paris as a cultural magnet. 2. These gifted individuals, drawn by the effervescent artistic ferment of Pre-WWI Paris, flooded what was then the world’s most cultivated and envied city and came looking for stimulation, inspiration and enculturation.

At the time, the word Cubism was on everyone’s lips. The word “Cubism” was invented by the Parisian critic Louis Vauxcelles (1870-1945) as a label for the outrageously chic French avant-garde art movement developed in early 1907. Cubism, properly understood, was a radical departure from traditional artistic depiction – its influences upon painting, sculpture and literature were momentous.

Without putting too fine a point on it Cubism formulated new artistic ways to define and delineate pictorial form and, given its subsequent universal adoption and the distancing effects of time, it difficult now to attune oneself with, let alone adequately appreciate, the bracing aesthetic challenges that it originally presented. 3.

The colours, the shortbread biscuit-like tones, the sheer splay of rhomboidal patterns, the visual play of linear jazz-like heady rhythms and the fugue of delicately repeated dissected forms all gave Cubist paintings a beguiling aesthetic insistence. Likewise, the new visual language of three-dimensional form promoted by Cubist sculpture – the language so eloquently handled by Lipchitz - was heard all over. As far as the art of sculpture goes, it was the sculptor Lipchitz, not the painter Picasso, who invariably was Cubism’s international standard-bearer. 4.

This standard was unfurled and waved even as far afield as Melbourne. Lipchitz’s work was recognized, lionized and locally promulgated for its aesthetic significance by both Teitsutis Zikarus (1922-1991) and Vincas Jomantas (1922-2001), two of RMIT Art School’s finest and most influential lecturers during the late Sixties. The new language of Cubism had a striking grammar of form that changed much of contemporary sculpture globally. The subsequent effects were impressive, lasting and almost inescapable. So much so that, even as late as 1987, the notable Australian sculptor Ron Robertson-Swann, the undeserving victim of Melbourne’s lamentable “Yellow Peril” saga, was moved to write an acknowledgment of Lipchitz’s achievements in sculpture. 5.

Jacob Chaim Lipchitz was born as a Litvak on Saturday 22 August 1891 in Druskininkai, the famous spa town on the Neman River in Southern Lithuania, fifty-two kilometres from the Polish border. He died at the age of eighty-two on Italy’s idyllic Isle of Capri on Saturday 26 May 1973 and his body was flown to be buried on Har HaMenuchot (Mount of Rest) in Jerusalem.

Lipchitz’s artistic interests first flourished at a commercial secondary school in Białystok in Poland – coincidently, also the original home of many fine Australians of Jewish descent. Thereafter, the young Lipchitz determined to travel to Paris in 1909, much to the initial exasperation of his building contractor father. He studied at notable art institutes in Paris: the École des Beaux-Arts (Delacroix; Degas; Géricault; Maillol; Moreau and Renoir were former students) and the Académie Julian (famous for Bonnard; Matisse; Léger and Derain) and attended additional evening classes at the Académie Colarossi with his friend Amedeo Modigliani – who painted a wedding portrait of Lipchitz and his wife Berthe (née Kitrosser), which is now in the Art Institute of Chicago.

Lipchitz’s standout talent ensured that he quickly gained respect and thereafter became more than fully embraced by the inner circle of the Cubists and their many patrons: the artists Pablo Picasso, George Braque and Juan Gris; the composer Igor Stravinsky; the writers Gertrude Stein and Apollinaire; the poet and filmmaker Jean Cocteau, the fashion designer Coco Chanel (whose portrait he painted); the collector Madame de Maudrot and the outrageous art patron Vicomte de Noailles.

Such rarefied social company was leavened by his very close friendships with the artists Chaim Soutine, Juan Gris and Modigliani. Lipchitz mounted his first solo exhibition at Paris’s Galerie de l'Effort Moderne in 1920 and held a further fifty-eight exhibitions during his lifetime. 6. He won the coveted Gold Medal at The World’s Fair in Paris in 1936 and the French State granted him the highly prestigious Chevalier de la Légion d'honneur award in 1946.

To date, after his death in 1973, as many as fifty retrospective exhibitions of his sculptures have been held in various international cities. His works are held in the collections of 105 major international institutions – the most significant being: The Jewish Museum, The Israel Museum, Guggenheim Collection, MOMA New York, Metropolitan Museum of Art, Stedelijk Museum, Philadelphia Museum, The Albert Barnes Foundation, Hirshhorn Museum, the Albright-Knox Museum, Yale University and Princeton University. 7.

Lipchitz’s large marble sculpture Homme assis à la clarinette II (Seated Man with Clarinet II) is a rare one-off sculpture that has an interesting history – one that was forced and conditioned by the events of WWI. Paris was in imminent danger of German bombing late in WWI and materials for the making of sculpture were impossible to obtain. Given the circumstances, Lipchitz feared for his life and that of his newly wed wife Berthe. In mid 1918, the couple hurriedly joined the Cubist artist Juan Gris and his wife Josette and escaped Paris for the French countryside. He settled mainly in the Indre-et-Loire (formerly Touraine) village of Beaulieu lé Loches in Central France, 218 kilometres from Paris, and sat out the remainder of the War. There, in 1919, he drew up a series of approximately eight known works that were subsequently modeled in plaster, some of which were based upon human figures with musical instruments.

One of these is the present work Homme assis à la clarinette II (Seated Man with Clarinet II). There was something about the angular shapes of musical instruments that enabled Lipchitz, like Picasso, to emphasize the visual play of planar forms that seem so characteristic of all Cubist compositions. After the War, his eight or so early sculptures were placed in storage and some fifty-two years later, during the early 1970s, he revisited these WWI works and, as he had always intended, completed them mainly in bronze and a few in marble, most probably from Pietrasanta near Carrara in Italy where he often spent his Summers.

It is important to note that the resultant sculptures, including Homme assis à la clarinette II (Seated Man with Clarinet II), are not editions, revisions or re-fabrications. They should correctly be considered and accepted as unique mature completions that owe their existence to a revisiting experience, somewhat in the manner of an Old Master, a music composer, poet or writer returning to complete an earlier unfinished work.

Lipchitz’s compelling domestic-sized marble sculpture Homme assis à la clarinette II (Seated Man with Clarinet II) embodies early Cubist principles and formal qualities in ways that reflect the aesthetic advances of the halcyon days of Pre-War Paris. Like all good Cubist art works it presents as an amalgamation of alternating views and caught glimpses. Its carefully chiseled forms, based vaguely upon the enlarged profile of a human figure, encapsulate a member of a music band holding a clarinet, whose form is integrated, as one, into the body of the musician. The polished marble work has the boldly chiseled visual impact of an impressive monument and its totemic overtones, especially in its angular head, shoulder and torso sections, may be seen as clear influences upon the later 1950s sculptures of the great English sculptor Henry Moore (1898-1986) – the only sculptor ever to turn down a knighthood for his art. Lipchitz may be seen in Moore, as Gustav Klimt may be seen in Friedensreich Hundertwasser and Picasso in Albert Tucker. The materiality, aesthetic force and compositional finesse of Lipchitz’s sculptures were readily noticed and, upon reflection, one often senses that many later sculptors have bathed in Lipchitz’s light. Lipchitz’s influence is under-examined and hence tends to be under-rated: beside Henry Moore, Lipchitz’s compositional elements may be found in the works of Henri Gaudier-Brzeska, Carl Miles, Henri Laurens, Alexander Archipenko, Brojn Horth, Otto Gutfreund and Julio González.

All this aside, the essential significance of Lipchitz’s compelling domestic-sized marble sculpture Homme assis à la clarinette II (Seated Man with Clarinet II) of 1919/1971 lies not only in its undoubted inherent aesthetic qualities but also in the undeniable charm of its artistic return – one that revisits and completes the original ideas and energy of the twenty-eight year old with the mature mind and hands of an eighty-year old. Thus considered, the sculpture was a full fifty-two years in the making.