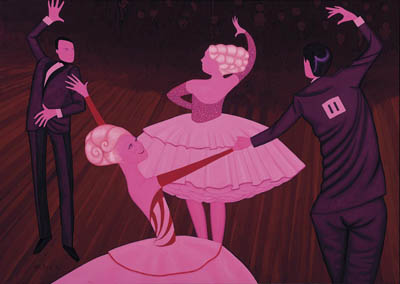 By Professor Sasha Grishin in Blog

John Brack’s Backs and Fronts 1969, is one of the two key major paintings from his Ballroom dancing series which he painted largely in 1969 and exhibited for the first time in 1970. The other major painting in this series is the Latin American Grand Final 1969, which is in the collection of the National Gallery of Australia in Canberra.

When first exhibited, Brack’s friend Ronald Millar proclaimed them as ‘perhaps John Brack’s happiest works … Brack’s version, complete with bal masque, pas de deux, solos and group routines is a marvellous amalgam of emotion and discipline placed in an ideally transfigured painterly form’.1 Other art critics saw a much more critical and socially engaging wit which ranged from a ‘new mockery of lowbrow and démodé art forms’2 to Daniel Thomas’s assessment that ‘it’s just another congenial subject for Brack. He’s always been interested in masks, in the multiple identities people create for themselves, the many layers that cocoon the naked individual. Stylised smiles, finger-work and footwork in this exhibition; real false limbs, real false teeth, real glass eyes, etc.’3 Possibly the most insightful review at the time was by James Gleeson, who observed that ‘Brack’s dancers live in their frozen gyrations because he has converted them into ikons of absurdity and elegance. They have become symbols of humanity’s dogged pursuit of ridiculous and useless kinds of perfection. No artist has touched upon this theme with such concentration, and none has expressed this aspect of the human situation with such brilliance and telling artistic economy’.4 In 1973 Patrick White was to observe that he thought, while watching The Last Tango ‘those dancers in the context were yours [Brack’s] come to life’.5 Subsequently the Ballroom dancing series has become iconic in Australian art and has been widely reproduced and discussed as some of the most memorable images in art anywhere of the late 1960s.

Until 1968, Brack had worked as the Head of Melbourne’s National Gallery Art School. Then aged in his late 40s, he decided that he would try to support himself and his family exclusively through his work as a professional artist. While not a dancer himself by nature, he was drawn to the theme of professional ballroom dancing for its sheer absurdity. As he observed ‘I have been so fascinated by the idea of people who turn pleasure, pastime, into work, labour and it is most exactified in professional ballroom dancing.’6 Perhaps more significantly, the theme presented him with the opportunity to explore human relationships, both real and simulated within a choreographed ritual.

Brack attended the World Ballroom Dancing Competitions held in Melbourne in 1967, he subscribed to The Australasian Dancing Times and acquired Maurice Strowbridge’s photographs of the dance competition. The first painting of the series, Japanese Latin American, he executed in 1968, and the rest in the following year.  In all, there were twelve oil paintings and three oil sketches were produced in the series. In many of the paintings, including The Old Time, Japanese Latin American and British Modern, Brack selected the most appropriate photograph to manipulate in the interests of his design. For Brack there was a need for this touchstone on reality, the here and now on which he was commenting, the record of a reality too fantastic to imagine as the contestants with their chocolate box pinned up smiles repeated the painstakingly rehearsed steps of ballroom dancing. It was only in the two major paintings in the series, Backs and Fronts and the Latin American Grand Final that he attempted the difficult feat of employing two photographic sources which compositionally he spliced together to produce a confronting juxtaposition. In Backs and Fronts Brack employed two of Strowbridge’s photographs, those of Ray and Judy Rivers and Donald Woods and Merrilyn Royal, to present two couples whirling through space on the dance floor. On closer examination, it appears that it could well be the same man or the same woman who is being presented from the back and the front possibly commenting on the faceless ritual involved in ballroom dancing. In the Latin American Grand Final, Brack added a further twist to the irony with the inclusion of a faceless judge wearing the number 12 tag on his lapel and in the top left hand corner, more vulnerable than the other dancers, dancing alone without a partner, he included a self-portrait of the artist. Unlike the painting Collins Street 5pm, 1955, in which Brack perceived that he had placed the artist in judgement over the clerks and secretaries in the street, in the Ballroom Dancing series the artist has become part of the humanity whom he observes and mocks. He subsequently noted ‘I considered I had made, at last a significant  advance on the superficiality of the Collins Street picture, while at the same time, not making the picture look overcomplicated. You see, the problem was to make it operate on different levels of meaning, but to make it look perhaps deceptively simple.’7

Beyond this literal reading, Backs and Fronts is also a comment on the precariousness and the extreme vulnerability of the contestants poised in difficult and exacting poses, balanced over highly polished floorboards with their reflections inviting imminent collapse. It is in this environment that the dancers play out their roles, creating a world of make-belief in which they are tightly bonded together in a relationship that is merely a well rehearsed ritual, full of superficial glitter, but devoid of a deeper meaning.

Brack’s subtle reworking of the photographic record was not only to enhance certain formal properties of the painting, to subtly introduce a gentle eroticism and to reinterpret the composition within blinding neon pinks, menacing blacks and slippery reds, but also to bring out this further level of meaning – the comment on human relationships, particularly between couples as a sort of allegory for marriage. It is a brilliant bitter sweet painting which has little to do with the social ironies of his paintings of the 1950s, but points forward to his profound questioning of the human condition and the structures in human society in his paintings of the 1980s and early 1990s.