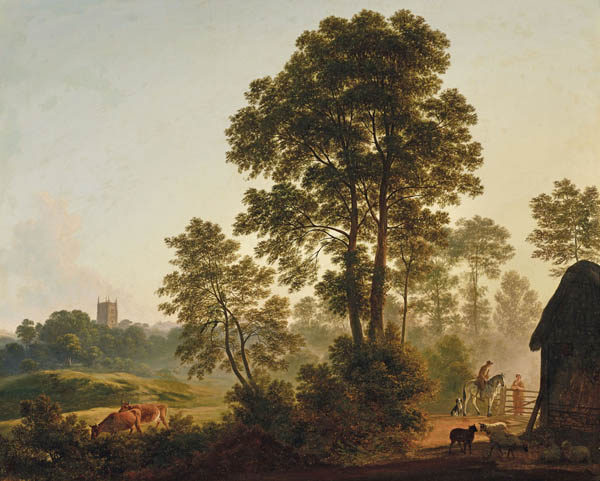 Morning Mist c1814 is a fine example of John Glover’s coveted English landscape paintings and contains the hallmarks of the picturesque movement that dominated English art in the early 1800s. It is also an important precursor to the paintings that Glover painted when he moved to Australia and settled in Tasmania with his family in 1831, aged sixty-four. Beside this, little is known about this impressive oil that has recently become known.

One of the joys of the picture researcher/art historian is discovering information about important works and helping to build a clearer picture of the artist and his or her milieu. David Hansen, a recognised scholar of Glover’s work and the author of a substantial tome entitled John Glover and the Colonial Picturesque 2003, has offered suggestions about the work. He points to the plausible resemblance of the tower to the Gothic Parish Church of St Peter’s Tiverton in Devonshire and to another church in Matlock, Derbyshire. According to Hansen, Glover ‘exhibited a few with the Society of Painters in Oil and Water Colours in 1814, in which case, the church could be St Giles’.1

Glover was a frequent visitor to Derbyshire, a county in the East Midlands region. We know from works held in distinguished public collections that he painted scenes of Matlock and the area nearby. He did sketches on the spot to form the basis of paintings completed back in his London studio. Two major Glover paintings in the National Gallery of Australia collection, Rural Landscape with Herdsman, Milkmaid and Cattle c1805 and At Matlock – Mist Rising (Landscape with Figures) 1814 (identified as such by Hansen) are both Matlock subjects. As with Morning Mist, they reveal the artist’s admiration for the work of 17th century French artist Claude Lorrain (1600-1682) including a ‘high vantage point, a dark foreground enlivened by human or animal staffage and a gentle zigzag through a sunlit centre of the composition.’2

Importantly, and crucial to the identification of Morning Mist, is a similar depiction of the medieval church tower in Rural Landscape with Herdsman, Milkmaid and Cattle. The round window beneath the Romanesque arch is clearly visible in both, while the hillside location, pasture, and pond, are recognisably that of the Matlock church with a slight variation in viewpoint. It would appear Glover has altered his position obliquely to produce two versions.

Further connections are made to a contemporaneous engraving included in a 4-volume copy of Lysons Magna Britannia; Derbyshire compiled by local antiquarian Thomas Bateman Webb. Entitled St Giles Parish Church, Church Street, Matlock 1821 this work identifies the medieval church’s perpendicular west tower with diagonal buttresses before it was rebuilt in the 19th century.