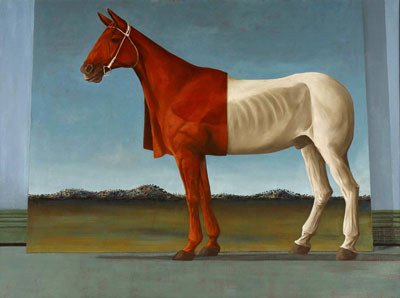 John Kelly (born 1965) burst onto the international art scene in 1999 when his bronze sculpture, Cow Up a Tree 1999 was selected to be displayed on the Champs-Elysées in Paris as part of an international exhibition of fifty sculptures celebrating the end of the millennium in Champs de la Sculpture 2000. Kelly was the only Australian sculptor to be invited to participate in this prestigious exhibition that showcased the works of some of the twentieth century’s most significant artists, including Pablo Picasso (1881-1973) and Alexander Calder (1898-1976). Kelly’s sculpture attracted a huge amount of media attention. It was also a crowd favorite for the duration of the exhibition. Cow Up a Tree is now on permanent display in Melbourne’s Docklands. Since then Kelly's work has been widely collected in Australia and abroad and he is generally regarded as one of this country’s most successful and significant contemporary artists.

Kelly is renowned for his preoccupation with cultural icons. In his own words:

Ideas derived within an evolutionary framework, beginning with William Dobell and the strange camouflage scheme that he was involved in during W.W.II, are what drive my work. Through using this narrative and adding new elements I have created a multi-layered structure of ideas. This evolution works on a slow time scale that is at odds in today's fast consumer culture where products need to be refreshed and changed on a continual basis. For me it is irrelevant whether I am painting cows, cubes or whatever. It is simply a matter of allowing ideas to 'evolve' on a fluent and continual basis. I believe it is only by creating my work in this slow evolutionary way that I can begin to create a truly intelligent art.1

There are so far four distinct motifs in Kelly’s continuously evolving oeuvre, most famously the cow series that launched him onto the international art stage. Kelly has also completed a memorable series dually inspired by the legend of Australia’s champion racehorse, Phar Lap and Sidney Nolan’s (1917-1992) famous series of Ned Kelly paintings. He also completed a series of works based around the Australia Council’s distinctive ‘kangaroo and sun’ logo, and a more recent series that examines Nolan’s famous painting Moonboy 1940.

Kelly began to deconstruct the mythology of Phar Lap in the late nineties, and the resulting series of paintings, which includes Redlegs 1996-97, and Homage to Sir Sid 1997 together with First Past the Post-Modern 1998, are playful, imaginative, intelligent and evocative. Phar Lap appears in many incarnations in Kelly’s paintings, many of which are based around the experience of visiting the preserved hide of the horse at the Melbourne Museum as a child. Phar Lap is cut in half, decapitated, skinned, and covered in a sheet as Kelly exploits the fact that he is now a relic in a museum.

In First Past the Post-Modern 1998 Kelly expands his field of reference. The horse has been cleanly severed down the middle and the skinned hindquarters of the animal are on view. This juxtaposition is confronting in many ways, the seemingly lifeless specimen is on the one hand depicted in all its muscle-bound glory befitting the champion horse that he was. On the other hand, the ghostly white rendering of the hind section of the animal, the pronounced ribs and sinewy muscles, seems strongly indebted to Kelly’s interest in Nolan’s work, particularly his series from the fifties exploring the effects of drought through images of decomposing horse carcasses. In the background, a canvas rests against the wall. In this Kelly depicts an unmistakably Australian landscape, dry and inhospitable, the hills in the distance sparsely populated with vegetation. Everything in the picture seems inverted and designed to provoke.

Kelly describes himself as an Australian, English and Irish artist. He was born in England and his family migrated to Melbourne when he was an infant. While the majority of themes explored in his work remain unequivocally Australian, Kelly has lived and worked in the United Kingdom since 1996. Kelly completed a Bachelor of Art (Visual Art-Painting) in 1985 and a Masters of Art awarded in 1995, both through RMIT. In 1995 he was awarded the Anne and Gordon Samstag International Visual Arts Scholarship Award and traveled to London to attend the Slade School of Art. He has exhibited extensively in Australia and internationally.