Olley’s knack for improving with age... 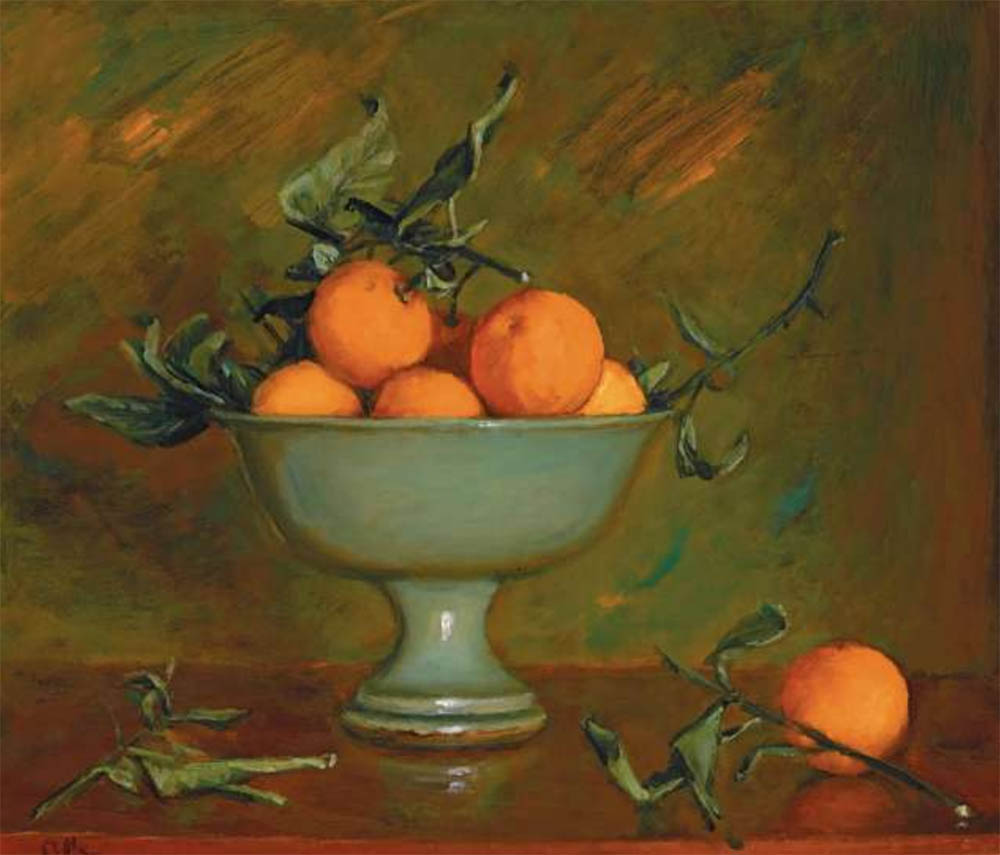 Olley’s knack for improving with age...

By Christopher Allen in Blog

Margaret Olley’s extravagantly coloured still-life paintings were embraced by her audience at a time when abstraction was on the rise and painting as an art form was in decline. Olley’s richly textured and colourful compositions were in sharp contrast to the minimalistic art trends of the mid-twentieth century. Her characteristic style struck a nerve with her Australian audience, her popularity continued throughout her lifetime and endures today. As a painter, Olley reached her peak in the 1970s, her finest work being produced between the ages of fifty and seventy. The artist’s vast oeuvre is being celebrated in two exhibitions; one at QAGOMA and another at Philip Bacon Gallery, both in Brisbane. Christopher Allen’s review of the exhibitions is below.

Still life, as a genre, is essentially the painting of objects. These can be of all kinds, from flowers and fruit to books, vases and musical instruments. They can even be food, as in the classic Dutch still-life paintings of wine and cheese, bread and fish, oysters and lemons. They cannot be living things, or at least not things that remain connected to the source of life: thus flowers in a vase are still life, while flowers in the ground are not.

Flowers growing in the earth are part of nature, a corner of landscape, and landscape as a genre takes us into a completely different field of awareness. Cut flowers, on the other hand, now severed from the life of nature, become objects among others in the artificial world of still life, of objects that we have assembled for our own purposes. Like the other elements in a still life, they come to reflect human feelings, appetites and sensibility.

Objects, in art, are thus the mirror of subjectivity, so that while landscape is the genre of transcendence, still life is the art of ­reflection and introspection. The Dutch still-life paintings of foods are designed to provoke virtual gustatory responses in the viewer: we imagine what the wine, the oysters and the bread, or the cheese and the olives, taste like. And that leads us to meditate on the mirages of appetite and pleasure, as well as on the meaning of the world of the senses.

The later masters of still life, of whom the greatest are Chardin in the 18th century and Morandi in the 20th, are more austere and less literal in their evocations of the appetites. Chardin seems to reduce the appetitive appeal of his material while at the same time raising the material evocation of its substance to new heights. He gives us more with a few pieces of fruit, a bowl and pewter mug, or even a glass of water and a head of garlic, than many painters of more obviously sumptuous or sensuously appealing motifs. Morandi is the most austere of all. For year after year in the mid-20th century, he pursued a reductive pictorial meditation based on a few very ordinary vessels laid out in different configurations on a small table with a piece of card or canvas pinned to the wall behind as a backdrop.

In contrast, Margaret Olley is almost extravagant in her use of colours, textures and a variety of props. In the course of more than six decades of painting, she produced countless tabletop subjects with flowers, vases, seashells and even pictures of various kinds, and she extended the still-life genre into expanded form of the interior. She was prolific in her output too, and this retrospective is accompanied by another smaller survey that closes today at the Brisbane gallery of her dealer Philip Bacon.

The GOMA retrospective reminds us that Olley did not always or exclusively paint still life. Her earliest pictures include small urban scenes in a style that recalls Drysdale, and indeed it was Drysdale who opened one of her early exhibitions. She was also close to William Dobell, Donald Friend, David Strachan, Jeffrey Smart and Ray Crooke, and the influences of most of these artists can be detected at times in her work. Many of them also painted portraits of Olley, shown in a coda to the main exhibition.

After the initial urban scenes and some landscapes, Olley did a series of portraits of indigenous people, including several nudes of young Aboriginal girls — echoing Gauguin and Degas in particular — and some scenes of young Islander men, which are closer to Crooke in their approach. These works are from the 1960s, by which time Olley, born in 1923, was around 40 years old, but her mature work was to be of a very different order.

In fact, perhaps the most remarkable revelation of this exhibition is how late Olley reached her peak as a painter. She did not really begin to find her direction until she was about 50, and her finest work was painted from around then until her early 80s. The most confident and mature works are from her 60s and 70s.

Had Olley died at 50, in other words, she would neither have been as successful as she later became, nor would she have ­deserved this retrospective.

But what is even more striking is not just that she continued to mature in a steady curve of improvement, but rather that there was a distinct step up in the quality of her work from the early 1970s, that is from about the time she was 50.

This is all the more remarkable when you consider how rarely Australian artists actually get better at painting as they grow older, or how rarely they even seem to make the effort to achieve greater mastery of their craft.

But this is exactly what we can see happening with Margaret Olley in the 70s — doubly surprising when we consider this was the decade when, after having been reduced to a shadow of its former self by successive waves of postwar abstraction, painting was considered by the avant-garde to have expired altogether.

In the middle of the exhibition there is a telling confrontation between a wall on which three flower pieces from 1962 and 1963 — when the artist was 40 — are hung above a setting of tropical cane furniture, and the opposite wall on which we can see her getting better at painting before our very eyes. The three early pictures are quite pleasant, but they are lightweight, banal in colouring and with little painterly interest. On the other side we find a far richer and at the same time more subtle approach to colour. But what has caused the change?

The significant difference seems to be the influence of Strachan. His inspiration seems already evident in Olley’s early 1948 Self-portrait, but it had not been noticeable in the works of the following two decades. One reason for this is no doubt that he had moved to Paris in 1948. In 1960, however, he returned to Sydney and in 1962 or 1963 bought a house in Paddington Street, which has apparently remained in much the state he left it at his death.

In 1970, Strachan died prematurely in a car accident and Olley was very moved by his loss. She painted several interiors of his house in Paddington, two of which are in the exhibition, from 1972 and 1973. These are by far the best interiors she had painted so far, much more focused and poised than the earlier ones she had done of the family home in Brisbane.

This experience clearly made her look very closely at Strachan’s paintings, and indeed do something even more profound than that. She seems to have assimilated his spirit, which strengthened and transformed her own style, so that after a few years in which her works are visibly influenced by Strachan’s style, she is able to develop further and come to what we can ­consider her own mature style.

Coming back to the wall I mentioned, there is a group of three paintings which tells the story very clearly. One is a still life of pomegranates from 1967; it is an attractive enough painting, stronger than the flower pieces opposite, but still lacking in unity, distracted by anecdotal detail — as in the texture of the basket, which is insufficiently subordinated to the whole — and above all lacking any sense of coherent illumination; a cold and inert light on the tablecloth has no connection to the main subject of the pomegranates.

To the left of this picture is one of those that shows very strongly the influence of Strachan, from 1975: here the motifs are somewhat stylised, but there is a unity of form, colour and light that is unprecedented in her earlier work. And then, hanging directly above the first pomegranate picture is a second one, from 1996. The contrast between the two is remarkable: in the later picture, everything is unified, details are subordinated to the ­effect of the whole, and the scene is bathed in a single luminous atmosphere.

Credit must be given to the intelligent curation and hanging of this exhibition, which allows the careful viewer to understand ­developments such as this, which could be harder to see if the hang were strictly chronological. On the right hand side of the same wall is another cluster of three pictures that confirms this process. They are three still lifes using the same large jug with a blue stripe, two of them from c. 1973 and the third from 1981.

In the first two, we can see Olley in the early stages of thinking about Strachan’s example — there is a new care and accuracy in the painting, but she hasn’t quite got the angle for the table top right: the eye level is too low and the perspective feels slightly disjointed. In the later painting she takes a slightly higher point of view and everything falls into place more harmoniously in a spatial arrangement that is plausible without being too literal.

Olley’s most impressive works, on the whole, are the interiors that she painted mostly in her 60s, 70s, and early 80s, with no sign of declining technical proficiency until her mid-80sAs already suggested, the interior is like an expanded version of the still-life genre, and that expansion entails a reduced focus on individual objects and a greater emphasis on the sense of a lived space. And as the rooms that she paints are in her own house, each of these interiors has the something of the feeling of a self-portrait.

And yet each one is also an essay in the arrangement of furniture, carpets and even pictures, and above all a composition in colour harmonies: sometimes, in fact, it seems that the whole point of these pictures is in the harmony of colours and light, and yet these visual effects would have no meaning if they were not anchored in the representation of the things and places that Olley paints. Her house becomes, like Monet’s garden at Giverny, a set for painting, an ostensible subject through which more subtle things can be suggested.

At the same time, these visions of domestic serenity stand in striking contrast to the reality of Olley’s home as revealed in several photographs that are included in the exhibition. Her house was picturesque and full of interesting things, but also cluttered and chaotic. It is the role of art to find, or rather to create, order out of disorder, lucidity out of confusion; and here it is her own world and her own experience that Olley reshapes time after time in the image of harmonious stillness.