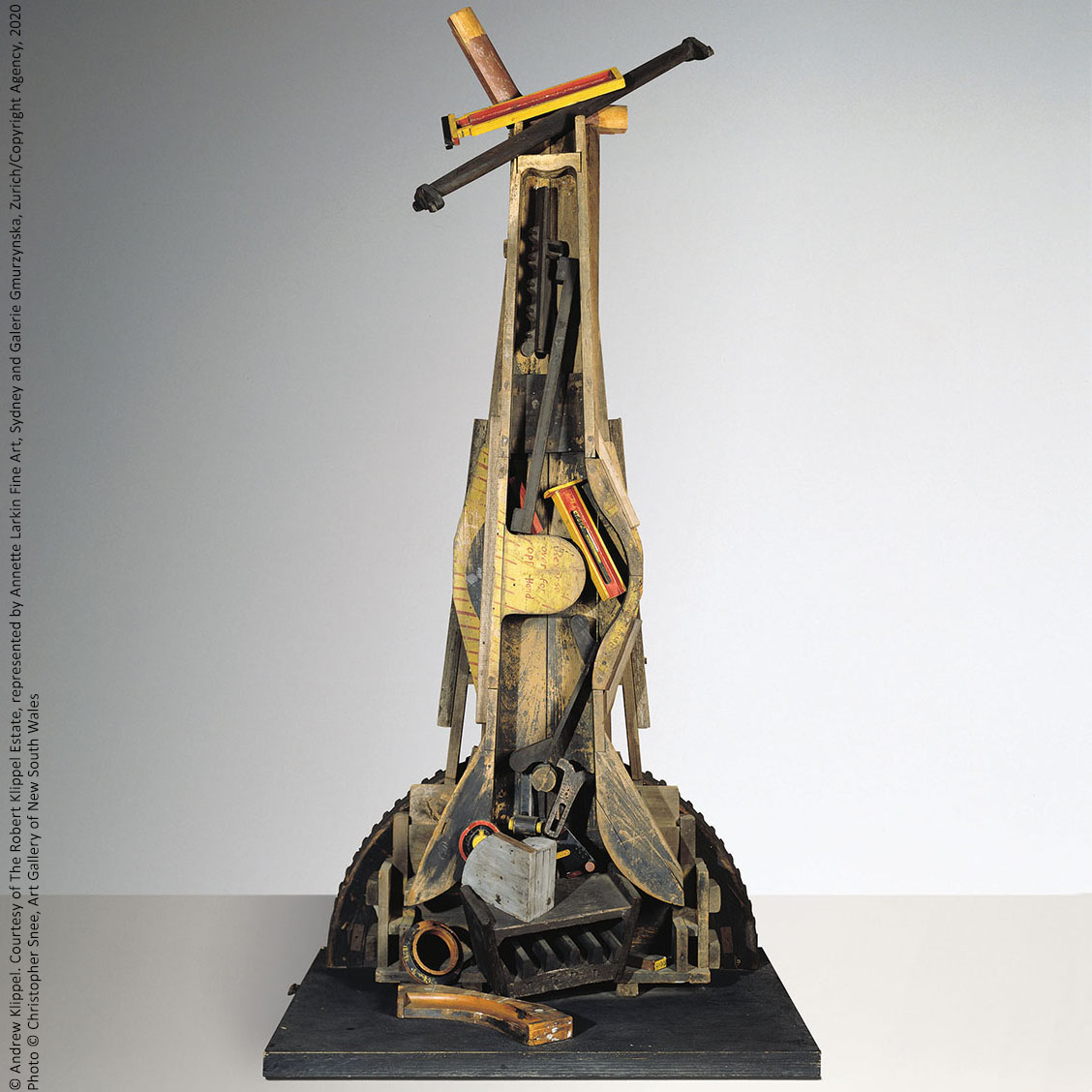 By Geoffrey Edwards in Blog

Provenance:
Estate of the artist
Acquired from the above, private collection, Sydney

The subject of numerous monographic publications as well as major retrospective and survey exhibitions, Robert Klippel is acknowledged as a sculptor with neither peer nor parallel in the story of Australian modernist art. A sometime associate in the late 1940s of the great British modernists Henry Moore (1898-1986) and Eduardo Paolozzi (1924-2005), Klippel also met and was encouraged by André Breton (1896-1966), the influential French writer and champion of Surrealism. Subsequently, while living in New York in the 1950s, Klippel mixed with a group of leading Abstract Expressionist artists who met socially at a downtown Manhattan loft known as ‘the Club’, a venue established by, amongst others, Willem de Kooning (1904-1997), Jackson Pollock (1912-1956) and the sculptor Ibram Lassaw (1913-2003). Few Australian sculptors have enjoyed such influential connections as these.

Born in Sydney in 1920, the youthful Klippel made ship models, a pastime that soon became a passion. With hindsight, it’s plain to see how this early fascination with the exacting task of model-making foreshadowed the artist’s mature practice of creating intricately poised structures – invariably abstract in kind – from an array of curiously shaped and equally curiously coloured ‘found’ objects: notably the wood patterns used formerly in industrial foundries to cast metal machinery components. No. 710, Windmill is such a work albeit an unusually grand and idiosyncratic example of the artist’s late and celebrated series of assemblages.

After a brief period of training for a role in the textile industry, Klippel joined the Royal Australian Navy in 1939 where his model-making skills came into their own when he was charged with making models of aircraft at the Gunnery Instruction Centre in Sydney. Following his war service, he attended art classes at the East Sydney Technical College where he was taught by the modernist sculptor Lyndon Dadswell (1908-1986). In spite of attending figure drawing classes, tuition in clay modelling as well as stone and wood carving, Klippel was convinced, even then in the mid-1940s, that abstraction was his métier as opposed to the prevailing tradition of figuration. He believed that sculpture must be ‘revolutionized without the figure’.

Thus motivated, and with the financial support of his parents, he embarked in 1947 on a trip to the UK where he attended classes at the famous Slade School of Fine Art while living at The Abbey Arts Centre near London. It was at The Abbey he met up with other Australian artists who were staying there including Leonard French (1928-2017), Grahame and Inge King (1915-2008; 1915-2016) and James Gleeson (1915-2008). The latter, in particular, became a close and life-long friend and sometime creative collaborator. In 1948, Klippel exhibited in London and a year later in Paris, mostly showing works that revealed a clear debt to Surrealism, a style then at the peak of its influence and popularity. Having spent over a year in Paris, Klippel returned to Australia in 1950 and found employment as a graphic designer. He also took evening classes in arc welding and other metal-working skills that would equip him for his later use of scrap metal components, typewriter parts and their like, to create dense, dynamic and spikey compositions inevitably termed ‘junk sculpture’.

In 1957 he travelled to New York where he spent time at ‘the Club’ and absorbed the progressive and heady atmosphere of the art scene finding employment from 1958 to 1962 as a sculpture teacher at the Minneapolis School of Art. He returned to New York in 1963 but soon resolved, on the strength of a positive reception to an exhibition of his work in Sydney, to return to Australia permanently.

Most recently, Klippel’s six-decade career was celebrated by the TarraWarra Museum of Art with an exhibition titled Assembled: The Art of Robert Klippel, an initiative that demonstrated the extent to which the artist’s fertile and restless imagination led him to experiment constantly with different materials, methods, formal idioms and, not least, with scale. While some of Klippel’s sculpture is miniscule in scale, a series of mostly late assemblage works, many of them composed of wooden foundry patterns – as is No. 710, Windmill – are monumental in bulk and emphatic in gesture.

The cavalcade of ‘repurposed’ foundry patterns used to construct No. 710, Windmill came from a vast stock of these obsolete but enigmatic objects salvaged in the mid-sixties by Klippel and fellow artist Colin Lanceley (1938-2015) from an old iron foundry in Sydney’s Ultimo. As it happened, Klippel’s stockpile of these bulky objects was untouched for almost two decades before he found a use for them, a use inspired by their mostly geometric, skillfully-fashioned and undeniably offbeat shapes intended for casting flywheels, cogs, rings, perforated plates, engine blocks and suchlike machine parts. Some patterns are unpainted, others are painted a matt black, others still retain the scuffed and faded livery of their presumably once bright primary hue.

To fully unify an assembled composition, Klippel would occasionally sand back certain surfaces and re-paint others. Any original notations on the patterns – instructions to foundry workers regarding the casting of a form – are generally left untouched by the artist and seemingly enhance the strange authority of the structures. No. 710, Windmill, for instance, retains a handwritten instruction in faded red letters visible on the pale yellow tab in the middle of the composition.

Having finally in the 1980s determined a use for this great array of formal elements, this stock of patterns, this ready-made vocabulary of shapes, Klippel worked consistently throughout the decade to create a formidable series of large-scale assemblages, significant examples of which – albeit perhaps none quite as grand or idiosyncratic as No. 710, Windmill – are held by major art museums across the country.

Certainly, the architectonic format of No. 710, Windmill recalls the tallest ‘tower’ in Klippel’s famous, large-scale photographic collage titled Philadelphia 1978-79 but it also, and more intriguingly, invites close comparison with a welded metal sculpture of comparable date by the constructivist pioneer Sir Anthony Caro (1924-2013). The work in question is one of a small group by Caro from the 1980s that re-imagine the compositions of famous paintings by Peter Paul Rubens (1577-1640), Rembrandt van Rijn (1606-1669) and Édouard Manet (1832-1883). The work is Caro’s Descent from the Cross (after Rembrandt) 1988-9. Caro’s sculpture is purely abstract, as is Klippel’s No. 710, Windmill (leaving aside the angled strut at the summit that is loosely suggestive of the blade of a windmill) but both might be considered to aspire to (and achieve) a powerful sense of Baroque grandeur, tumult and even, perhaps, pathos.