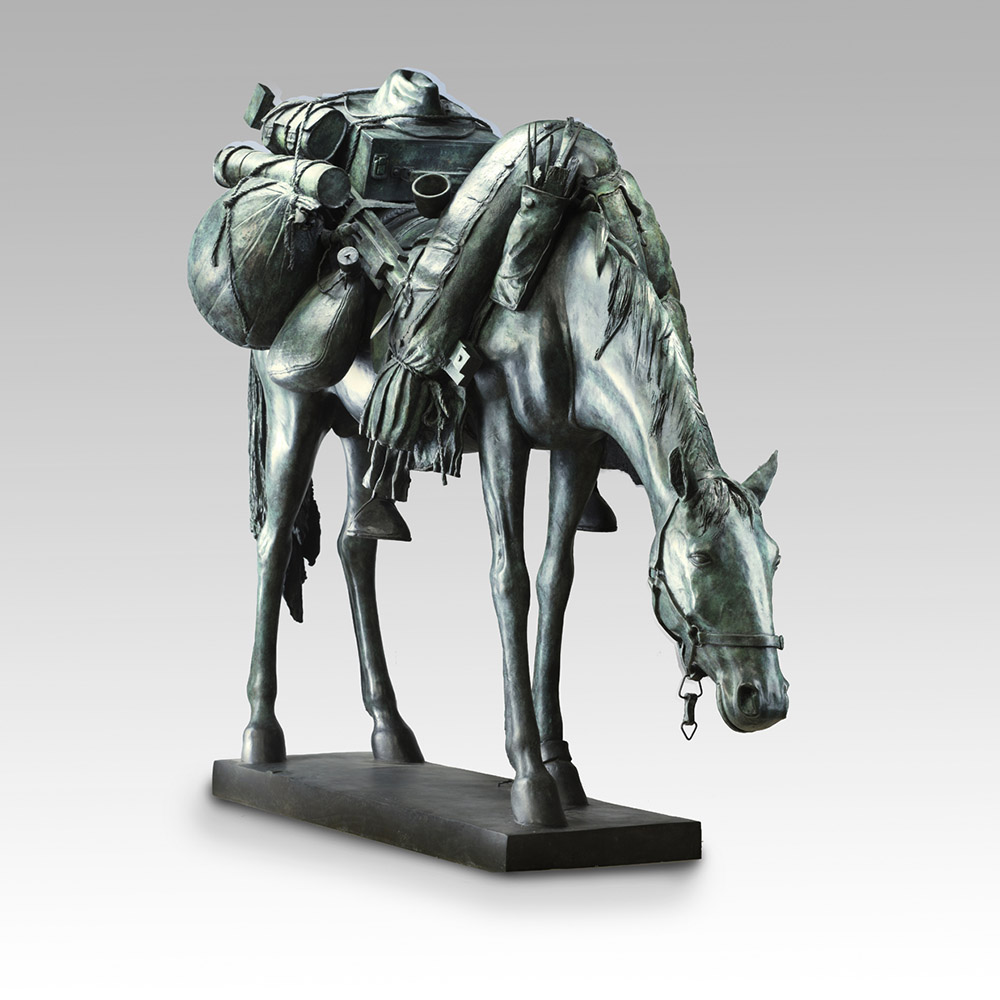 By Tim Storrier in Blog

'I grew up on a station in a world without television, chain saws or trail bikes. Stock work was done on horseback and occasionally a sulky would appear on the dusty roads. Polo was often played on the same horses that worked the station.

I imagined as a boy romantic figures; cowboys, explorers and princesses. I saw on desks and tables strange heads of horses, tigers and women holding lamps.

In country memorial parks there were large bronzes; men in uniform with rifles, sometimes embraced by angels with large wings, on occasions imaginary beasts. These ink wells, lamps and cenotaphs continued to dance their way into my memory leaving a nostalgic affection for the material of their being - warm patinated bronze.

My mother Nancy took my twin sister and I on long rides around the paddocks, across the creeks and through the stands of gum trees beside the fields of wheat and oats.

The homestead sheds were full of saddles and assorted tack used with the working mounts. Teams of draft horses pulling huge wagons loaded down with wool bales was still a living memory for older rural people.

As children we were given ponies for athletic reasons. These were older calmer animals - ambulatory, experienced and unfazed by children. I remember old Taffy. He had a propensity to bite as you mounted, would often try to scrape you off on a barbed wire fence and on occasion would kick. He was my horse and I addressed him by name.

In my dreams Taffy was my companion and guide.

The Equine Impedimenta series followed the Impedimenta series (a walking figure whose progress is impeded by the weight of a ludicrous amount of baggage). I started the process looking for an older mount with a gentle demeanour but I had no luck in my district as all the horses were equestrian poseurs. I then asked Gai Waterhouse if she could help.

Immediately Gai introduced me to Tully, a 16 year old gelding; an old grey horse she stables with her volatile runners to keep them calm. It is an old practice, the calming effect of a grey horse on its flighty companions.
Coincidentally after completing a group of works from this series I was alerted to a small drawing by John Sell Cotman, probably completed between 1800 and 1830, of an alert, slightly mythical pony loaded with the equipment used by an artist: palette, easel, canvases, brushes and paper portfolio.

The Equine Impedimenta bronzes resulted from numerous studies, drawings and paintings. Collaboration with master sculptor Liao Shengxiang then led to the production of an initial maquette followed by the large statue and finally a life-size work.

Horses are beautiful creatures. Their partnership with us is ancient and although not without coercion it has been a wonderfully productive relationship.'