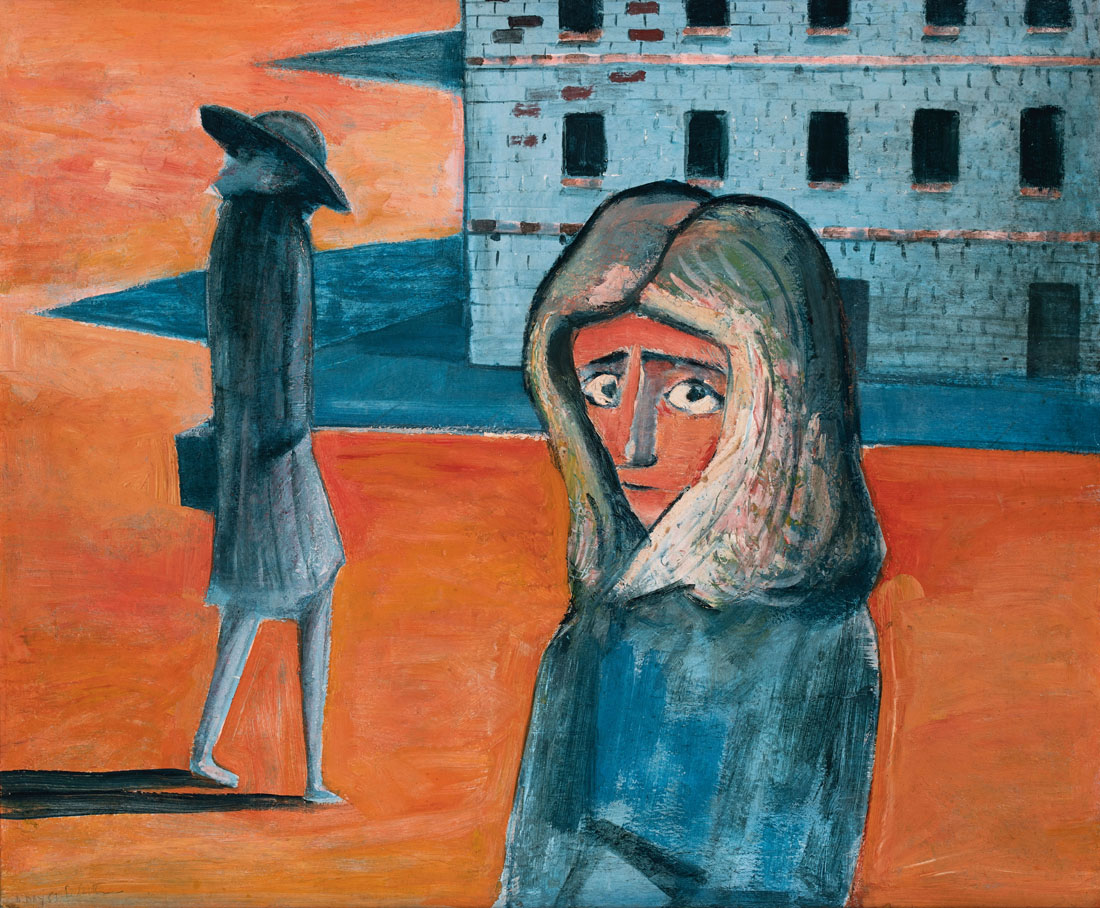 By Gavin Fry in Blog

In the first decades of the twentieth century, up until the time of the Second World War, images involving children were few and far between in Australian art. A beach scene might have a small knot of figures in the distance, or a cityscape could include a small figure for scale, but rarely recognisable in age or gender. There were of course formal portraits of children, like Hugh Ramsay’s (1877-1906) superb portrait of Miss Nellie Patterson, now at home in the National Gallery in Canberra. But that was a form strictly for the prosperous and well connected, like little Nellie, namesake and niece of our grand diva Dame Nellie Melba. Things would change with the arrival in Melbourne of the eccentric Cossack Danila Vassilieff (1897-1958), who loved the lively and anarchic world of the young, especially the street kids who spent much of their time playing on the narrow pavements of Collingwood and Fitzroy. For Vassilieff, the children were not just a casual ornament in the wider scene, but the focus of his work, front and centre. Playing games, riding their trikes and billy carts and generally having fun, they brought a new life and vigour to the Melbourne art scene. Those younger artists who were drawn to this inspiring artistic mentor followed his lead and set about depicting the life of the back streets, before then strictly out of bounds to artists seeking sales in the comfortable suburbs beyond the inner ring of decaying Victorian squalor. Arthur Boyd (1920-1999), John Perceval (1923-2000), Sidney Nolan (1917-1992) and Joy Hester (1920-1960) all introduced youth and play into their work. Some imbued it with the darkness of war and depression, while others found liberation in the charm and innocence of children, the most notable being Perceval with his series of ceramic angels.

Charles Blackman was one who was drawn to urban subject matter, finding inspiration on the urban streets he called home. Once settled in Melbourne with his new wife Barbara, Blackman set out to produce a body of work that would lift him from talented youngster to serious artist. He began with a simple subject, the uniformed schoolgirls he saw walking to and from the dour brick walls of the local schools. He had experienced loneliness and uncertainty as a child and felt for the young girls, anonymous and furtive beneath the broad brims of their regulation hats. He knew that school was a complex and, at times, ominous place, where class, tribe, gender and ethnicity were all markers to be negotiated and endured. The first of the series saw his figures as simplified and insubstantial beneath their defining headgear – thin black stockinged legs and shapeless grey uniforms creating long and menacing shadows in the afternoon light. There was none of the open engagement of the Vassilieff children or the bubbly vivacity of Perceval’s angelic characters. We have no idea of their young lives and thoughts – and are they beautiful, plain, happy or sad? We must project our own experiences and memories on these faceless children, and that of course is their appeal – they will be who and what we want them to be, coloured by our own lives and imaginations.

With the initial public acceptance of the first series of schoolgirls, Blackman pushed the idea further, bringing them out from under their hats into the light of the street and the playground. And, as we already suspected and the present work shows, they were not always a happy bunch, with worried faces and questioning eyes, suspicious and wary of the new post-war world. The medium seems appropriate to the subject of this enigmatic work – the thick tempera of the background, vigorously applied with a palette knife, is a foil to the sweeping brushstrokes of the young girl’s hair. Such detail was new to the artist, who in the earlier works shaded all facial features beneath the broad sweep of the regulation hat. More broadly painted than the earlier schoolgirls, this raw and distinctive image has been closeted away for more than four decades and comes to light at a time when the artist’s works are receiving new interest, and appreciation, in the marketplace.