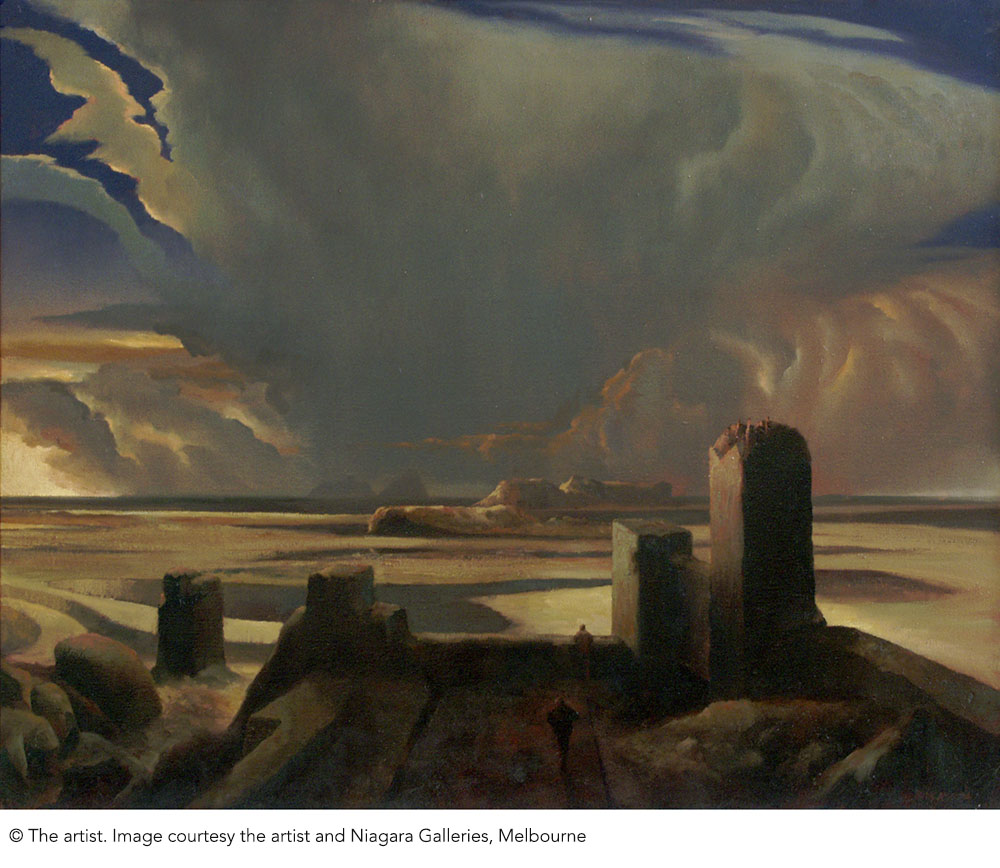 By Asta Cameron in Blog

As an artist, Rick Amor is determined, meticulous and unpretentious in his public persona. After a measured start including cartooning and comic book illustration, he has risen to the very pinnacle of the Australian art world, esteemed by critics and collectors alike.

Throughout his career, Amor has continuously depicted the locations where he spent the most time, with the most recognisable being the eastern shores of Port Phillip Bay near Frankston where he grew up. While these beaches are generally placid and unspectacular in reality, Amor transforms them into works full of visual drama and narrative intensity, as seen in Old Seas 2004. Unlike the idyllic beach holiday paintings by Arthur Streeton (1867-1943), Charles Conder (1868-1909) and Penleigh Boyd (1890-1923), Amor’s stormy skies and windswept waters are far more reminiscent of nineteenth-century Romanticism or seventeenth-century Dutch seascapes.

Amor continues to produce work of the highest standard, refining a relatively modest set of motifs and subjects, which can be plotted over the past thirty years of his career. One of his strongest recurring motifs, seen in nearly all his landscapes and certainly in the present work, is that of man-made structures succumbing to the constant onslaught of the elements. In Old Seas, we see that even enormous concrete pylons will decay and corrode in the harsh environment of wind, salt and sea; a metaphor for the follies of man’s overambitious pride in attempting to create permanence in an unstable world, to dominate the indomitable Mother Nature. The crumbling and forsaken remnants of the pier allude to a time past, when the pier was strong and useful, giving the painting that enigmatic atmosphere typical of Amor’s work. This idea is further exemplified in the two tiny figures in the foreground, dwarfed by both the hulking man-made pylons and the immense sea and sky.

Amor is a hugely accomplished conveyor of mood and intimate feeling, with his works often giving the viewer a palpable sense of an aeons-old mystery. His works seem filled with imbued sentiments, pregnant moments, uncovered memories and nostalgic sentimentalism. Paul McGillick put it best when he wrote:

‘There is a disconcerting quality to the pictures, as though they were not so much snapshots of reality as frozen frames from the moving pictures of our dreams… Invariably the eye is pulled up short on its journey to the vanishing point by a visual fragment, an image or a person which resonates with meaning, except that, as in a dream, the meaning is something felt rather than understood.’1

Amor achieves this gravitas not only by employing tempestuous weather, eerie settings and a subdued tonal palette, but by the lone figures in many of his compositions, inserting enough narrative to make us wonder, but not enough to let us know. For example, in the present work, is the closest figure walking out towards the figure at the end of the pier, or back inland away from them? Have they just had an interaction, or are they about to? Or perhaps they do not know each other at all. It is certainly not surprising to learn that Rick Amor is an avid reader of crime fiction. Amor himself said, ‘I like to suggest that behind the prosaic reality something else is lurking.’2