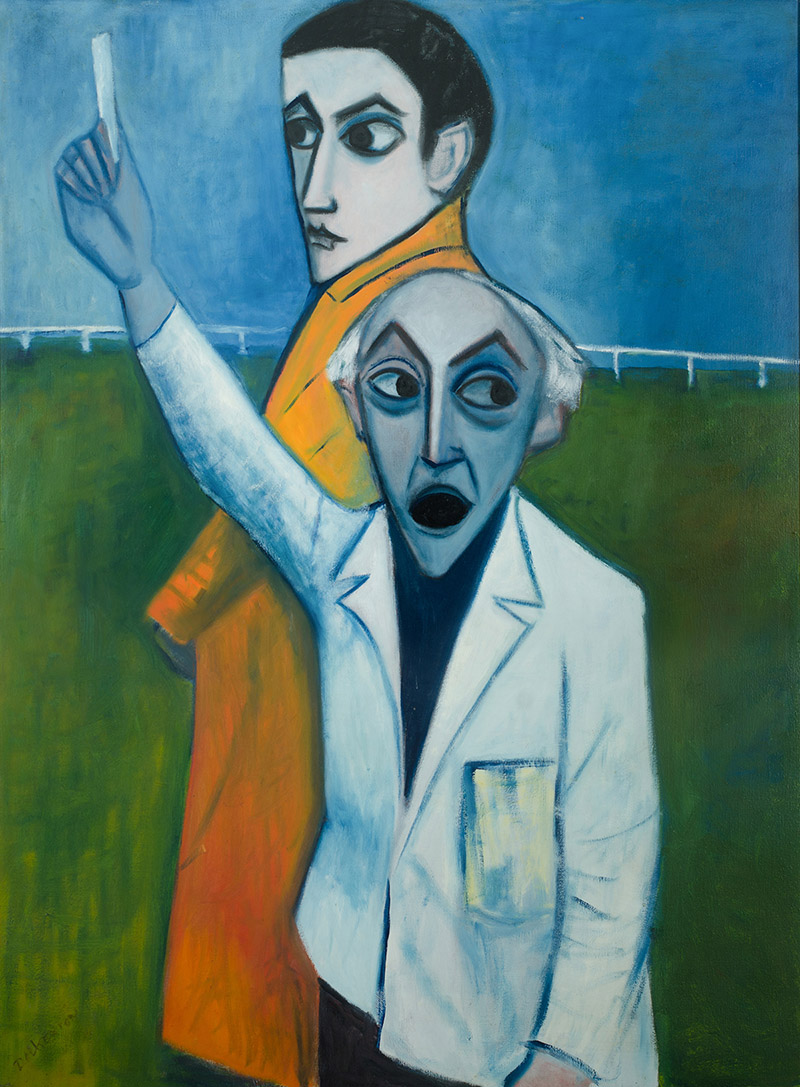 By Asta Cameron in Blog

Born and raised in Depression-era Sydney, Robert Dickerson was no stranger to adversity; a trait evident in the melancholy, gaunt faces of the characters in his paintings. From a young age he drew compulsively, usually warships and aircraft, but his attention was drawn elsewhere as he grew older and his responsibilities increased, with his mother charging him board from age thirteen. Dickerson left school at fourteen to work in a hinge factory in Annandale, before turning to boxing to earn a living at sixteen, later recalling those days as desperate and painful.1 Alongside his boxing, he developed an abiding interest in punting, using his boxing winnings to bet on the races at Warwick Farm and Randwick.

As World War II broke out, Dickerson enlisted in Royal Australian Air Force and spent time in Darwin and South East Asia, where he made drawings in his downtime. After four years of service he was demobilised, and returned to his two enduring passions: art and horse racing. Remarkably, Dickerson’s career as a full-time artist owes its inception to a punt on a horse. In 1957 he won an Australian Women’s Weekly competition to decorate a Kelvinator fridge and used the £100 prize money to place a bet on a horse race. With the winnings he was able to purchase decent art supplies and fund his move into a career as a full-fledged artist.2

Later in life he left Sydney’s suburbia behind and moved to a property in Nowra, New South Wales, where he could breed race horses at his training facility, as well as continue to paint seven days a week in his studio. His passion for breeding and racing horses was recognised when he was appointed artist-in-residence at Moonee Valley Racing Club for the 2001–2002 season.

Dickerson’s racing pictures are some of his most accomplished works and are highly sought after among collectors. Of these works, Punters 1968 is cited as one of his most famous and boasts a full-page colour illustration in Robert Dickerson: Against the Tide, an esteemed book by his wife-cum-manager, Jennifer Dickerson.3 The work is executed in his idiosyncratic style, the two figures having long noses, whimsical, averted eyes and ambiguous expressions. In a 2004 interview he says this is, ‘the same style I've always used and I have no intention of changing it.’4

Typically, Dickerson has provided a partial narrative in this work, with the scenario left unresolved - as the bookmaker yells his announcement, holding the ticket high, is the punter experiencing a win or a loss, happiness or sadness? It is for the viewer to conclude the story. As the work was given an alternative title, The Winning Ticket, by Jennifer Dickerson in her 1994 book, we may imagine the punter to be Robert Dickerson himself, winning the funds to begin his journey as a professional artist back in 1957.