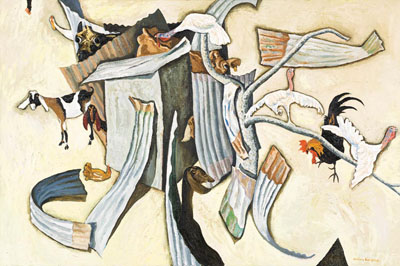 By Gavin Fry in Blog
Lot:
Farmyard Scene with Goats and Cows

When William Robinson was awarded the Archibald Prize in 1987, one journalist suggested that the win had succeeded in ending ‘almost 50 years of obscurity’1 for the artist. Patronising as it might have been, the statement carried a ring of truth for a great many followers of Australian art. Robinson was certainly not a complete unknown, especially in his home state of Queensland, but for many he was a new name, an artist quite magically appearing on the wrong side of his fiftieth birthday. Robinson again won the Archibald in 1995, as well as two wins in the Wynne Prize within the same decade. And by the turn of the century he had become one of the most recognised and highly valued artists in the country. The life experience which took him to the top of his profession was one of order, hard work and a benign approach to the world. Never the tearaway or the child prodigy, Robinson worked away steadily over decades, gradually building a style which, while it developed late, was all the more profound for its maturity and vision.

Bill Robinson was born in 1936, a child of the great depression and World War II. He came to adulthood in the early 1950s and, like many of his peers, saw teacher training as the best way to gain both an education and a career. In the 1950s a university education was still an expensive option, and the studentships offered by state education departments provided a stipend while training, as well as a guaranteed job in the immediate years out of college. It is unsurprising that many aspiring artists took this option and teaching, with its generous holidays and opportunities to travel and live in regional and rural locations, seemed like a promising opportunity. Robinson trained as a primary teacher, but fortunately gained a scholarship and was able to make the jump to art school and the chance to become a college lecturer. He pursued his career, lecturing in a number of teacher’s colleges and Centres for Adult Education, with dedication and continued in his day job up until, and beyond, his ‘coming out’ with the Archibald win of 1987. He did find, like a great many of his peers, that while superficially a good option, teaching was mentally and creatively demanding and it was difficult to consistently produce one’s best work while tied to the classroom and studio.

Robinson moved from the amateur ranks into the serious art world when he was taken into the fold of Queensland art dealer Ray Hughes. He had his first exhibition with Hughes in 1977 and remained with him until the late 1990s. The relationship was beneficial for both parties – the artist was included in exhibitions in Brisbane and later in Sydney, and Hughes gained an artist with genuine broad appeal and the capacity to win major awards. Coinciding with Robinson’s linking with Hughes, the artist began a series of works that struck a chord with art lovers and collectors. He had moved to a small hobby farm at Birkdale, near Moreton Bay, to the east of the city of Brisbane. He ran some Guernsey cows, as well as goats and chooks, all of which became happy subjects for his art. Robinson was well trained in the technical aspects of his profession and had won the Godfrey Rivers medal as the outstanding student of his year. He had taught technical drawing, perspective and freehand drawing in his first year after graduation, so was well equipped to design and execute work of a professional standard. But while he might have had all the technical skills in his armoury, he also had a whimsical sense of humour, which surfaced particularly in his farmyard paintings. In spirit he was close to the Melbourne modernist Eric Thake (1904-1992), who always expressed a strong sense of humour at a time when his peers were taking themselves very seriously indeed.

Robinson began to paint the life of his own backyard and the animals that shared the small space. This was certainly not a broad acre concern, designed for profit and high levels of production. It was a place of fun and the interaction with animals of personality and character. The pictures he produced became design exercises that balanced the blundering shapes of the dairy cows with the curious personalities of the goats and the mad flight of the chooks. In every case the artist has chosen a high viewpoint, with no horizon evident. He is perhaps looking down from the verandah of an old Queenslander, perched on high stilts. Robinson gazes down with amusement and wonder at his humble and chaotic domain. Twisted and battered sheets of iron provide both shelter and abstract form, harking back to the flapping iron of Russell Drysdale’s (1912-1981) outback compositions of the 1940s. Goats peer out from behind the iron, while cows, more often that not presenting their inelegant backsides to the viewer, wander about with a benign and bucolic presence. At times he would place himself and his wife Shirley into the composition, but they are always bit players, far from in control of their own backyard. Whimsical and lighthearted they might be, but the farmyard paintings mark an important progression toward the majestic and cosmic landscapes of Robinson’s later career. He plays around with viewpoints and angles, constantly toying with our notions of perspective and a logical view of the world.

Farmyard Scene with Goats and Cows pushes a number of the motifs further than in the earlier works. The familiar elements are there, the inquisitive goats, the handsome rooster and two cows almost completely hidden behind the ramshackle dunny and the random scattering of twisted iron sheets. The usual suspects have been joined by three white turkeys, perched on the bare branches of a tortured tree. The artist has worked the elements, both living and manmade, into an elegant two-dimensional design, strengthened by the refined palette and carefully balanced forms. Each form is linked to the next and the clear outlining of the birds and animals adds to the strong decorative effect. It is the usual humble backyard subject, but made more universal as a powerfully realised abstract design that looks forward to the cosmic landscapes of future decades.

In the farmyard the view is always down to the ground, but soon, when he wandered the deep bush around his new Springbrook studio, Robinson was to turn 180 degrees and stare at the sky, the infinite firmament above his head. He had spent some years playing around with his own small space, the dusty yard and its dotty menagerie. Having stretched the possibilities of near space, he turned to contemplate the wider world of nature. His public, happy with his small and endearing world at Birkdale, was prepared to go with him on the big journey. Having retired from teaching and able to explore life as a full-time artist, Robinson quickly developed paintings on a much larger scale as he invented his own unique way of picturing the landscape. As a young instructor he had mastered the art of traditional perspective, but in his new works he deliberately embraced a new and destabilising vision where the horizon swirls and dips, changing constantly as the viewer explores the new grand canvases.