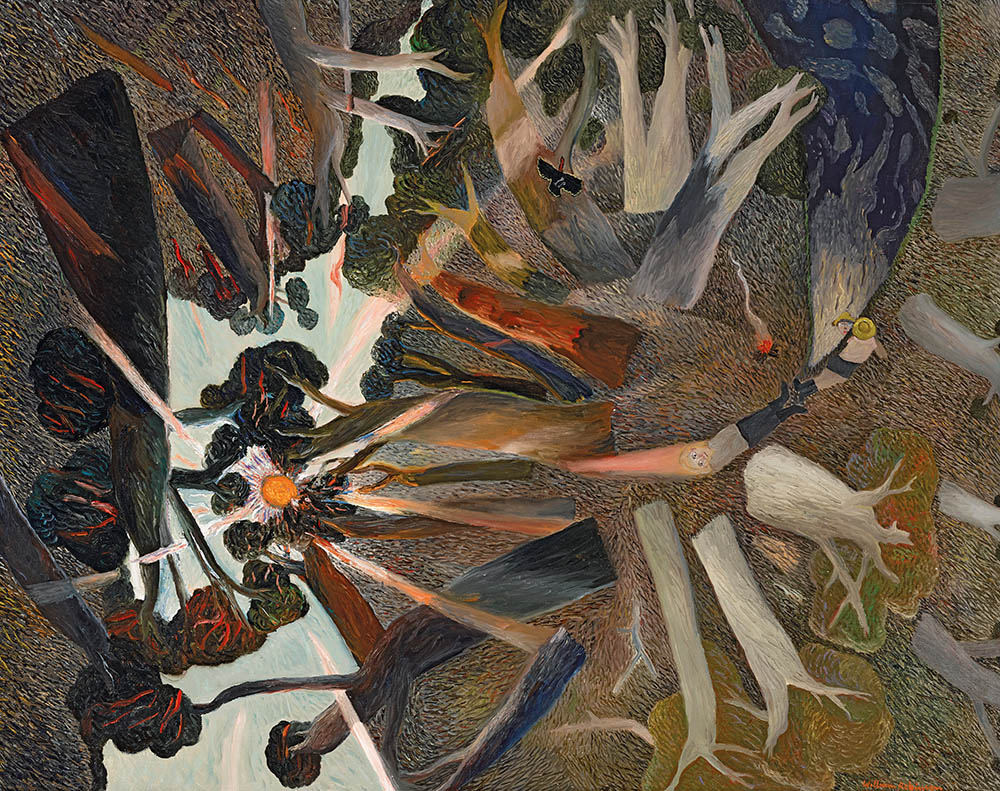 …the painting simultaneously does so many different things, exquisitely orchestrated to the finest pitch, that you can feel exhilarated, drunk, as you stand before it.  You do feel intoxicated, or at least pleasurably seasick, because you are immediately plunged into the painting’s massive tilt and curve, loosing your sure vertical footing in the world.1

Queensland artist, William Robinson (born 1936) paints his own intensely personal experience of his immediate surrounds. His forty year career has comprised three distinct phases, beginning with the farm house pictures of the seventies, which evolved into the farmyard series of the eighties, and finally the rainforest series and other landscape works which he began in the late eighties and today are considered the definitive works within his oeuvre. ‘Charting this progression is like moving through an intimate world of lambent interiors, stepping outside into the comical melee of the farmyard, and then journeying beyond the domestic environment into the immensity of wild nature.’2 These various stages within Robinson’s career are united by a personal aesthetic strategy which emphasises an experimental approach toward formal qualities, particularly space and perspective.

The most significant event in the development of Robinson’s unique personal style occurred soon after his family purchased a property at Beechmont, near Queensland’s Gold Coast. Here Robinson developed a unique pictorial approach to perspective often referred to as his ‘viewfinder’. Seeking a visual language which conveyed a sense of the individual moving through the landscape, Robinson stumbled across his viewfinder quite by chance; ‘One evening, after rain, Robinson stood outdoors, looking down into a puddle of water. In it, he saw the perfect reflection of the sky and moon.  He was at once looking down, and looking up at the heavens.’3 This moment is illustrated in the painting, Creation night, Beechmont 1988 in which Bill and his wife Shirley are depicted looking into a pool of water with reflections of a bedazzling starry sky. Soon after, Robinson began to investigate this new multifaceted approach to perspective in his landscape works, particularly successful at conveying the vast and vertiginous nature of Robinson’s home landscape at Beechmont. Bush Landscape with Sunbeams c1990 exemplifies this multifaceted approach to perspective, creating a unique visual experience for the viewer who is at once looking down into the landscape and up into the sky.

In Bush Landscape with Sunbeams c1990 Robinson demonstrates the highly stylised approach to landscape and pastel tones that characterise his early works. Here he paints a vast oasis populated with anamorphic trees arranged in an angular manner around a void of violet infused space. A characteristic example of his transformative paintings, Bush Landscape with Sunbeams also sees Robinson’s continued interest in autobiographical figuration inserting himself and wife Shirley into the landscape. No stranger to representing himself in his art in various comical guises, Robinson has twice been awarded the prestigious Archibald prize for his satirical self-portraits, firstly in 1987 with Equestrian Self Portrait and again in 1994 with Self Portrait with Stunned Mullet. Robinson’s early landscapes regularly depict Bill and Shirley in a continuation of the farmyard themed paintings. They usually appear within the landscapes overawed by the profound beauty of their rainforest surrounds. Bush Landscape with Sunbeams sees Bill and Shirley neatly encased within a circular formation of trees.  They are both reclining beside a small campfire that sends soft plumes of smoke into the atmosphere. Most significantly, Bill’s face is illuminated by a beam of light from the rich orange sun hovering overhead, suggesting a moment of divine clarity and oneness with the world.