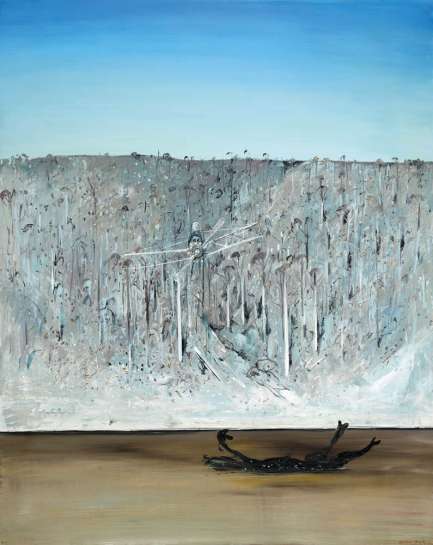 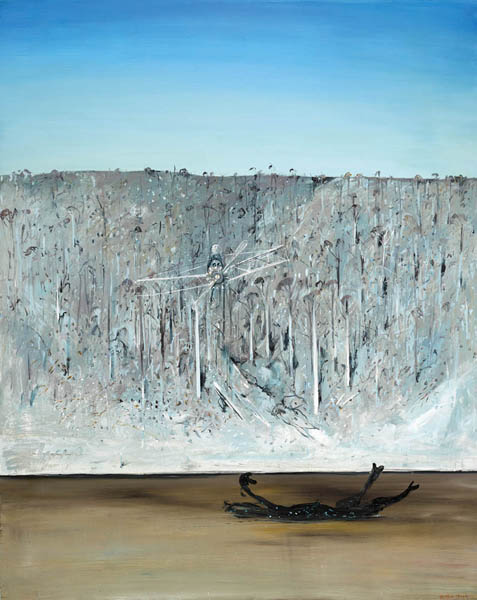 Arthur Boyd’s paintings of the Shoalhaven River express the artist’s feeling for the great river and its surrounds – the scrubby banks and hills, tidal flats and the powerful ebb and flow of the water. After returning with his family from twenty-one years in England, Boyd settled just outside of the south coast town of Nowra. He had become captivated by the rich, green dairy farming land of the south coast in 1972 when visiting his friend, Frank McDonald. Boyd soon purchased a property, ‘Riversdale’, which runs along the Shoalhaven River and in 1978, purchased ‘Bundanon’, a pocket of land located within a bend of the river.  Upon settling into his new environment, Boyd faced the challenge of rediscovering his ‘Australianism’ .1 At first, the surrounds at ‘Riversdale’ felt alien to Boyd, who had become disconnected from the native Australian bush during his time in Europe. The heat, wind, trees and light – he was to be ‘reborn…in the harsh realities of the Australian bush beside a great, gentle, calm and vicious river.’2

Boyd’s first experience of the unpredictable power of the river occurred not long after he had moved to the Shoalhaven when the river flooded and washed away the bridge that he had built to access the road out at ‘Riversdale’. He became marooned and was unable to leave for days, the artist described the experience as an ‘initiation’. Boyd saw first-hand the widespread damage caused during flood, the experience demonstrating the omnipotent and indiscriminate power of the water as it surged during heavy rains, wreaking havoc along its banks. Livestock losses were common following floods in the Nowra area due to the number of dairy farms along the river. The artist recalls the destruction and devastation, ‘the river moans and groans in a muted way, and great chunks of what was upstream comes down – dead cattle, with their legs sticking up, logs and roof tops. Once a whole house came down the river.’3

Aeroplane, Riverbank and Carcass is part of a group of paintings in which Boyd deals with the image of the Shoalhaven in flood. The genesis for this work came from an incident involving his neighbour who was attempting to save his stud bull and herd from the threatening flood waters. He had called for a RAAF helicopter to drove the bull to higher ground from an area of paddock that was slowly being enveloped by rising water. The noisy arrival of the helicopter scared the bull who ran to safety however was found dead days later, presumably from a heart attack. In the present work, the helicopter is depicted as a hornet-like bi-plane circling the muddy brown waters below. The black animal carcass in the foreground is a stark contrast against the beauty of the Shoalhaven landscape - a reminder of the devastation caused by flood.

Throughout his career, Arthur Boyd surveyed the great Shoalhaven River under many conditions; fair weather, flood, drought - regardless of the circumstances the artist successfully distilled the essence of the place into his work. His Shoalhaven paintings are a record of the artist coming to terms with the harsh native Australian bush after living away from it for so long. Upon resettling back into life in Australia, ‘Riversdale’ and ‘Bundanon’ provided the surroundings for the artist to re-establish himself within the landscape that had become alien to him. ‘Boyd’s art is an art which aspires beyond the personal and regional towards a universal expression of man’s place and man’s dilemma in the Universe.’4