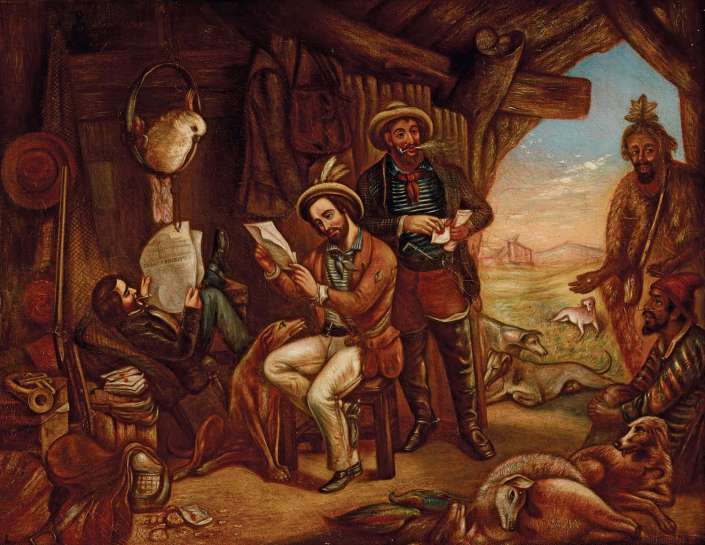 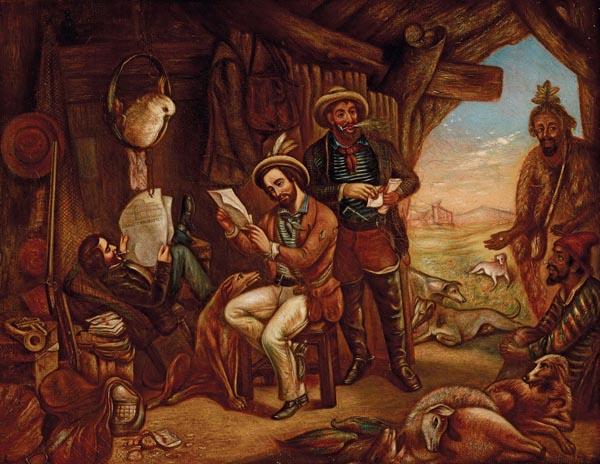 By
Lot:
Australia. News from Home

The experience of the emigrant in Australia’s colonial history has been the subject of surprisingly few painterly images. The most famous, arguably, is Ford Madox Brown’s (1821-1893) The Last of England 1825 (Birmingham Museum and Art Gallery collection). Closer to home, Tom Roberts’ Coming South 1886 (National Gallery of Victoria collection), recalls the post-gold rush era with his painting of migrants, based on sketches made during the artist’s return to Australia from London aboard the SS Lusitania the previous year.

Sitting directly between these two views of actual emigration is Harden Sidney Melville’s (1824-1894) The Squatter’s Hut: News From Home 1850-51 (National Gallery of Australia collection), an expression of the flipside, that of the pioneer’s lived experience in a new land. Shortly after its exhibition in London in 1851,1 the famed printmaker George Baxter entered into an agreement with Melville to reproduce the painting using his patented ‘Baxter Print’ technique. Released in early 1853 under the revised title of Australia. News From Home, this proved to be a commercially successful decision, for many thousands of the relatively inexpensive prints were subsequently purchased to hang in family homes as a tangible reminder of close relatives now domiciled at the other end of the world. In preparation for the transfer of the design, Baxter painted this version in oil, which stayed in the possession of his descendants for more than one hundred and fifty years.

By the age of twenty, Baxter was already illustrating books produced by his father, who was also  a printer. He then studied wood engraving in London before setting up his own business in 1827, and being granted Patent No. 6916 - Improvements in Producing Coloured Steel Plate, Copper Plate and other Impressions in 1835.2 Baxter’s prints demonstrated an incredible fidelity to the original and utilised mezzotint plates, single colour wood blocks (up to twenty per print, though twelve were utilised for the copy of Melville’s painting) and a hot-roller finish.3 By 1853, when Baxter’s version appeared, gold had been discovered in both Victoria and New South Wales leading to the retitling as Australia. News From Home. Its popularity saw the image used in other publishing ventures, such as an illustration for sheet music.4 Following his bankruptcy in 1865, the company Vincent Brooks and Co. bought many of the original plates, and continuedproducing selected prints including Australia. News From Home. Sadly, Baxter died two years later following an accident whilst mounting an omnibus, an ignominious end for a man who ‘had known fame and glory, had been received by kings and princes, and his work had been admired by the highest in the land, but ... he died a lonely, embittered and disappointed man.’5

In the execution of his prints, George Baxter was a fine copyist and would often embellish his version after the original. In this regard, there are noticeable stylistic differences between Melville’s painting and Baxter’s. Key alterations include the colour of the squatter’s coat (from Melville’s green to Baxter’s red-brown), the removal of blood from the kangaroo carcasses in the foreground, the changed colours of the deer hounds, and the absence of the scene beyond the hut’s opening, which originally featured three dead tree trunks, a squall of cockatoos, and a redshirted horseman rounding up a mob of sheep. That said, it remains a fascinating image, a direct link to the potency of Baxter’s prints amongst the general British public. It is also a rare, capably painted example of the emigrant experience in Australia, one of the defining aspects of this nation’s character.

accompanied by a statement of authenticity from a descendant of the Baxter family and two original prints by George Baxter, Australia. News from Home 1853 and News from England 1853

This work is believed to have formed the basis for the famous print by George Baxter of the same name.

ALL CURRENT & PAST CATALOGUE WORKS BY ATTRIBUTED TO GEORGE BAXTER 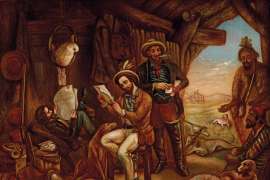