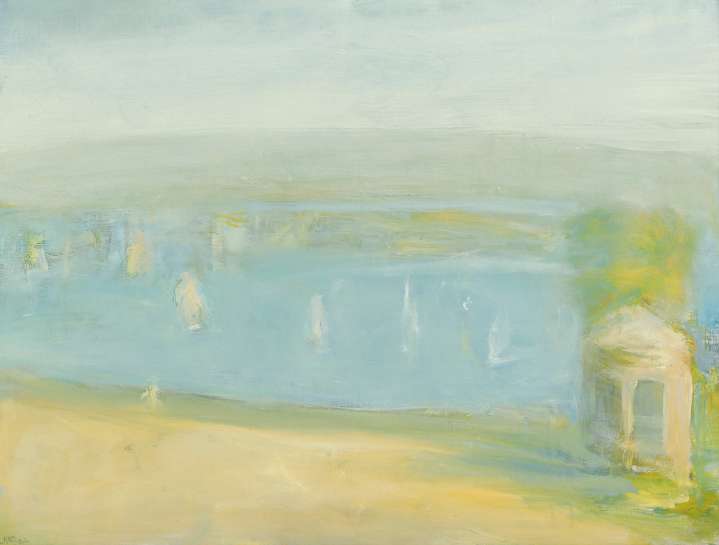 By
Lot:
Boats in the Bay

Lloyd Rees lived an exceptionally long and creative life and rightfully came to be considered the ‘grand old man’ of Australian art having both the profile and the body of works suited to such an elevated position. Rees ennobled his vision of Australia with a European association and grandeur that recalled some of the masters of the Italian Renaissance. Quoted in The Age in 1982 Lloyd Rees said: ‘If there is one thing I want now it is for my paintings to be light right through. One of the great things the Impressionists did, probably not consciously, was to bring back what the great fresco schools of Italy had achieved, the sense of the painting being on a light background. This is what I am trying to do here, to make the lightness of the canvas the dominating thing.'1Boats in the Bay 1982, is indeed a painting about light. J.M.W. Turner was an early and ongoing influence; the later Rees paintings sharing with Turner a 'golden haze ... of Turneresque visions.'2

But this is not simply a painting about light, or Tasmania. Rees was 87 when he made this work.  Using mainly the primary colours of blue and yellow - the blue of contemplation and purity, and the yellow of life and being - the painting is more about metaphor and the transcendental; about capturing a moment in eternity.

In the catalogue introduction to Rees’ 1987 Tasmanian Suite exhibition at the Bonython-Meadmore Gallery in Adelaide, Hendrik Kolenberg, the Curator of Art at the Tasmanian Museum and Art Gallery in Hobart, rather eloquently wrote about Rees’ late work:

….looking at one of his late works is quite literally like standing at the edge of the world – the sun and its light in the subject in each, a metaphor of life, but also of the incomprehensible and unencompassable universe; its expression is metaphysical.3

Rees could see the Derwent from his son's home in Hobart and returned to it often in later years. Boats in the Bay is an exemplary work from this period; expressing implicitly Lloyd Rees’ ability to create evocative and eloquent scenes.

In my own small way I have found that the best subjects seem to find you rather than you find them. You have doubtless had the experience. You go out looking for a subject even with one in mind when suddenly an entirely different picture forms before one’s eyes. A rhythm of line, of form and colour, which almost says, ‘I have come to be painted.’ They are always nearly the finest subjects and they are full of adventure and represent a new experience…4

In Boats in the Bay, Rees’ innate sense and understanding of nature is obvious and clearly forms the very basis of his art. This, combined with the meditative and emotive quality of his work ensures that his landscapes are never seen as a mere visual experience, but something expressly more tangible.

ALL CURRENT & PAST CATALOGUE WORKS BY LLOYD REES 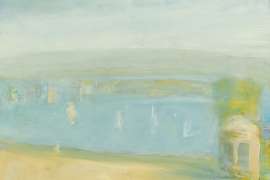 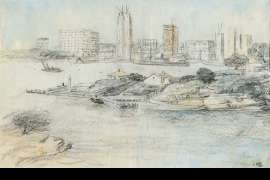 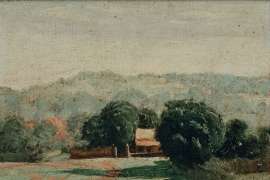 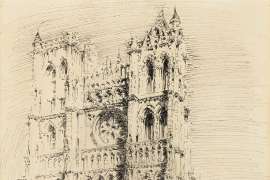