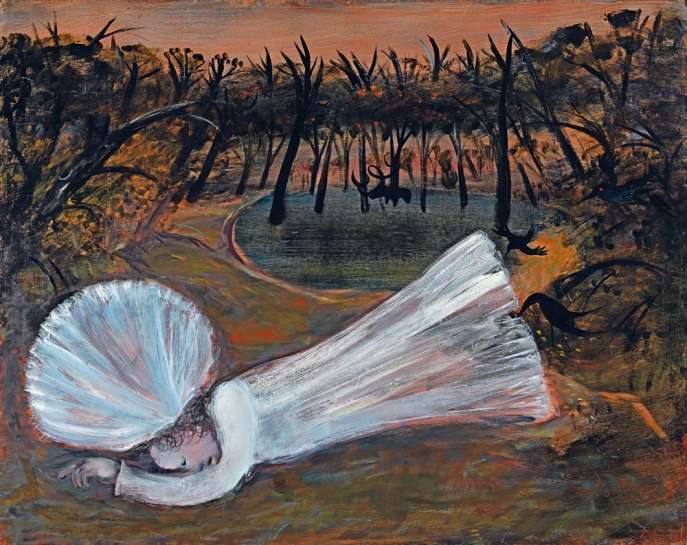 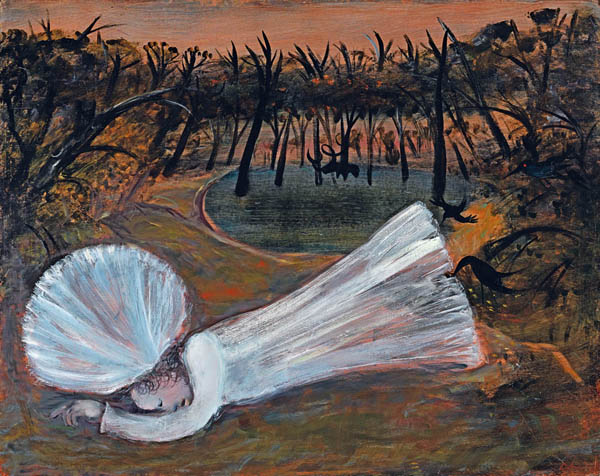 Bride Dreaming by a Pool c1960 is a little-known painting from an important period of Arthur Boyd’s career. This sensuously painted work has only recently come to light. It provides a valuable bridge between the first paintings Boyd did on the bride theme in Australia during the 1950s and an extensive cluster of English works that he commenced in London from February 1960.

Love, Marriage and Death of a Half-caste was the extended title given to the first flush of bride paintings that Arthur Boyd produced between 1955-58. The thirty or so works were referred to simply as ‘allegorical paintings’ by Boyd. The longer title was given by the distinguished Australian art historian Ursula Hoff in an article she wrote at the time of the first exhibition of the series in 1958. Hoff’s glowing assessment of the Australian Galleries show echoed the sentiments of her colleagues who correctly predicted that they would become instrumental to the development and success of Boyd’s later work.1

The origins of the Bride series and Arthur Boyd’s maturity as a painter can be traced to his first visit to Central Australia in 1953. Up until then, like many other white Australians during the period, Boyd’s contact with Aboriginal people was minimal – confined in the words of Grazia Gunn to having seen only ‘one Aboriginal, a chap around Melbourne who played a gumleaf’.2

Boyd was shocked and appalled by what he saw in Central Australia. Travelling from Adelaide to Alice Springs on the legendary train The Ghan, and then further inland by car, Boyd encountered disturbing scenes of racial segregation and vilification. He witnessed the herding of Aboriginals into chicken wire enclosures at railway depots and being taken away in cattle pens on a train. ‘Passing through remote communities Boyd was equally dismayed by the living circumstances of those of mixed descent, then known as ‘half-castes’ because of the government’s insistence on racially codified categories.’3

The first work on the bride theme appeared in 1954. Boyd’s observation of Aboriginal people attending a church wedding was an important source. Boyd did studies of a mixed-race bride in her wedding dress. While the first painting was not altogether successful, it gave voice to Boyd’s views on the marginalisation of minority groups and that social exclusion extends across racial divides. Encouraged to persevere with these ideas, Boyd began to experiment with selected motifs and aesthetic principles. He drew his personal observations and experiences together with long-held beliefs on human suffering, victimisation, passion and love.

Bride Dreaming by a Pool was most likely painted soon after his arrival in London. The painting bears a strong relationship to five English works that were displayed alongside eleven Australian bride paintings in Boyd’s 1960 solo exhibition at Zwemmer Gallery, London, although it wasn’t included in the show. Examples from both sets of work also figured prominently in the major retrospective at the prestigious Whitechapel Gallery, London, in 1962, along with newly painted images that focussed squarely on figures and lovers in the landscape.

Although they are concerned with similar ideas and visual tropes, clear distinctions can be made between the Australian and English brides. The English paintings are generally more ethereal in tone, less overtly violent or haunted by bestial apparitions. Stylistically they are quite lyrical and often sensual in colour and brushwork, paralleling Boyd’s firsthand ‘discovery’ of the paintings of John Constable (1776-1837). The bridegroom’s physical presence is not always overtly apparent, while the bride often merges seamlessly into a less hostile Australian landscape that frequently includes water as a symbol of life and hope.

Arthur Boyd’s interest in cyclical patterns and the idea of decay, death, metamorphosis and renewal came to the fore in his works painted between 1960–61. As the English art critic John Russell commented: ‘Figures and landscapes are in different idioms, and Mr. Boyd paints his blighted forests and wooded creeks with the most tender, imaginative feeling. Intense and striking as all these images are, they become most moving when the feeling in the landscape envelopes the figures too.’4 Boyd’s friend, the Australian philosopher, Brian O’Shaughnessy expressed similar ideas, but in a more poetic way, in his introduction to the Whitechapel show: ‘The sensuality which we meet in these paintings of Arthur Boyd is the true sensuality of the flesh and is enshrined in the iridescence and luminosity and calm of autumn and sunset, those times of peace, fruition and harvest.’5

Bride Dreaming by a Pool presents such a poetic and sensual interpolation of a figure absorbed into the landscape. It is an intriguing and perplexing image that combines the psychological dimensions of the dream-state and unconscious memory through the nuances and depth of brilliant painting. A prostrate bride lays face-down asleep by a pool. How or why she came to be there, pictured in that way, is not openly divulged. As witnesses to the ensuing drama, we are invited to conjure possible scenarios based on visual characterisation and ruminate on the symbiotic relationships that are suggested through the surrounding landscape, birds and the mysterious animal creature.

Bridegroom in a Black Creek (1960) and Bride in the Moonlight (Bride Turning into a Windmill) 1960, both from private collections, are two related paintings from the period that present clues to the many possible interpretations of the Bride Dreaming by a Pool. In these two works the bride appears over pools of water. In the first painting the Chagall-like bride levitates above the groom who lies beneath, half submerged in water. In the second work his physical presence and the idea of the thwarted union has been erased altogether and replaced by a self-absorbed bride peering at her reflection.

Bride Dreaming by a Pool takes a similar though divergent path. The bride is pictured alone, as in Bride in the Moonlight (Bride Turning into a Windmill), but rather than becoming self-absorbed she communes directly with nature. The inclusion of the black ramox or horned ram lurking in the shallows introduces a familiar Boydian trope of sexual intent and base passion. However, it has been banished to the background and enveloped in the purifying qualities of the blue pool of water. In the same way, the inclusion of the three black crows in Bride Dreaming by a Pool is less a sign of impending doom or danger than a familiar and comforting presence in the landscape. A crow with a red eye acts as an observer set safely back away, one is caught flying down to investigate, while the third gingerly pecks at the hem of her gown.

Another point of difference to the two previously cited paintings, in Bride Dreaming by a Pool her body is in firm contact with the ground. Her skin is no longer the white of previous works (or the blue of the Aboriginal groom) but more natural, matching the earthy tone of the surrounding soil. The wedding gown also seems to take on a life of its own, drawing parallels with the form of an upturned windmill.

Each of these subtle variations point to the cyclical nature of life and offer peace, rest, hope and redemption. Water is a restorative and life-affirming presence in the English bride paintings, as clearly articulated in another related work Bride and Groom by a Creek c1960, from the collection of the National Gallery of Victoria. Here, the physical bodies of the bride and groom merge into the water and take root in the ground. The vivacious blues, pinks and greens provide a note of optimism in an emotionally charged work.

Bride Dreaming by a Pool has an impeccable provenance. It is a tender and reassuring painting, a dream fantasy of anticipated union and/or thwarted love that takes place in an intimate pocket of nature enlivened by the golden glow of a night sky. The contrast between the stark white wedding gown and the warmer rose-pink colouration of the landscape is eroded by the diaphanous quality of the gown. Influenced by the light of the English countryside at dusk, memories of Australia and the brushwork of John Constable, Rembrandt and Titian, Boyd’s work is an intoxicating mixture of dream and reality.

Bride Dreaming by a Pool c1961