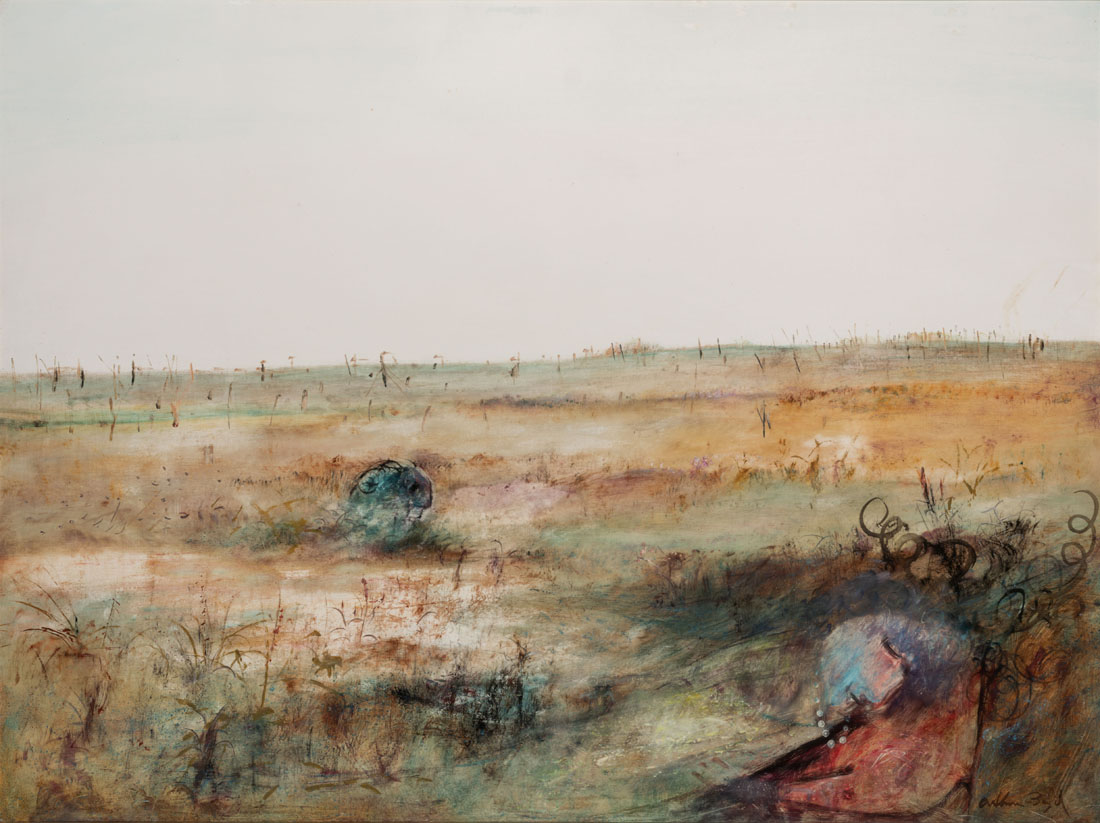 In this painting Arthur Boyd introduces one of his most potent archetypes into the still, sparse space of a Wimmera landscape.

Boyd began painting the Wimmera district in western Victoria some two decades earlier, first visiting in the summer of 1948-49. Known for its wheatfields and vast plains, the Wimmera had attracted the attention of artists before him such as Russell Drysdale (1912-1981) and Boyd’s friend and contemporary, Sidney Nolan (1917-1992). Boyd brought to it his own unique sensibility, finding a landscape that combined the ‘matter-of-fact and poetical.’1 For Boyd, the Wimmera’s parched open spaces and sun-bleached fields dotted with farming equipment evoked a quintessentially Australian rural experience, while its infinite horizons and seemingly endless space stirred the artist’s creative imagination.

When Boyd’s Wimmera landscapes were exhibited in 1950 in Sydney they received instant acclaim, and both the Art Gallery of New South Wales and National Gallery of Victoria acquired works for their collections.2 Over the next few years Boyd continued to travel through the Wimmera district, garnering inspiration for work which he would continue to create decades later. Though he was based in the UK for the majority of the 1960s, he would intermittently return to the Australian landscape in his art, where it would often act as a stage for mythical themes.

In the present work Boyd introduces the motif of the Bride, which he developed a decade earlier in his seminal series of paintings Love, Marriage and Death of a Half-caste, now simply known as the Brides. More than forty paintings form this body of work, which were made over several years from 1958 onwards, and exhibited in both Australia and London. The series is now regarded as Boyd’s most profound allegorical work, and the Brides are undisputedly amongst the most important artworks created by an Australian artist in the twentieth century.

The Brides are widely understood as a discourse on the politics of racial division in Australia.3 Though commenced in the late 1950s, the seed for the series was sewn in 1953 when Boyd made a trip to Central Australia, and saw the abject poverty and degradation of human rights that Aboriginal people were suffering as a result of child removal policies, and the violently racist mentality of the era.4 The profound assault that this had on the artist’s sensitivity is widely discussed in the scholarship on Boyd, and is regarded as pivotal to the inception of the Brides which portray a complex romantic relationship between an Aboriginal man and a white woman.

Boyd responded to the unjust treatment of Aboriginal people via an allegory that could be universally understood – one of unattainable love. In many ways he uses love to humanise his Aboriginal protagonists, at a time when ignorance and dehumanisation prevailed. As a whole these paintings are dreamlike, and deeply irrational. While they resonate with meaning they do not form a clear story and tend to defy straightforward interpretation. The inclusion of the lightly painted bride in the lower right of the present work continues this sense of narrative ambiguity.

In Bride in a Wimmera Landscape the profile of the bride’s face is softly delineated, while her body has become a simplified area of paler coloured earth against which the white pearls of her necklace stand out. She appears to be embracing another figure, depicted in warmer hues with a limb just discernible. Whether this figure is animal or human is difficult to establish, but the curling black tendrils that emanate from it bear similarities to those of the ramox motif of a black ram with curled horns that Boyd frequently used to represent lust and sexuality. A more direct representation of ramox can be seen in the black shape near the centre of the picture plane.

Painted in a soft muted palette with egg tempera and oil on board, the psychological anxiety of Boyd’s Brides of the late 1950s has been replaced by a gentler mood in the present work. Dissolving into the landscape itself, here the Bride achieves the union that evaded her in the earlier series as she rests on the warm dry earth of the Wimmera, entangled with another. In this serene work as in others, Boyd abandons logic to invoke a mythic dimension to the land and its inhabitants that reaches beyond pure representation.