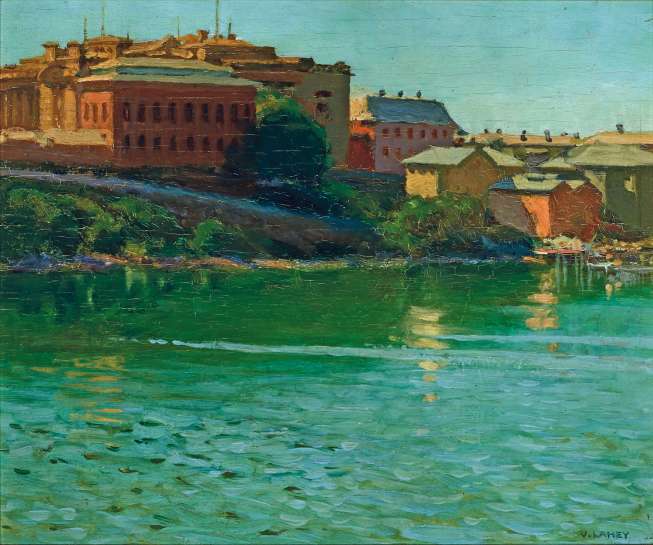 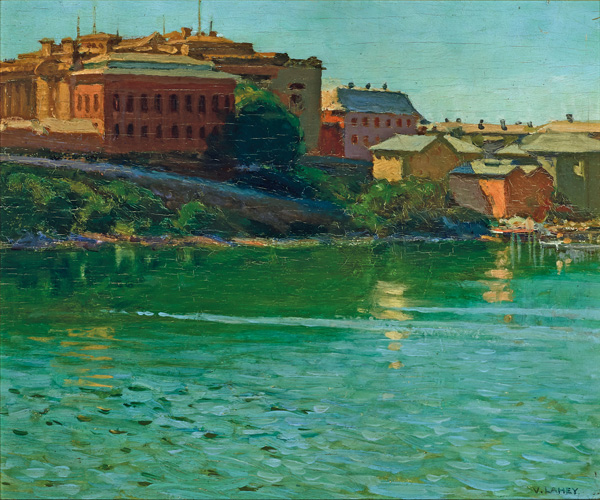 While the later years of Vida Lahey’s career were characterized by still lifes and flower studies, her impetus throughout the 1920s and 30s was landscape painting. As a Queenslander, her paintings of Brisbane are undoubtedly among her most coveted, as exemplified by the recent auction result for of Fig.1. Waterfronts and architecture are recurrent elements in her landscapes, both of which we see skillfully executed here. The composition of Brisbane from South Bank is like that of her 1928 Italian landscapes, where architecture is set against a high-horizon line in morning or afternoon light.1 Lahey returned to Brisbane in 1929, and this work comes from a group of her city landscapes from 1930-31 which depict buildings with a European ambience.

The key component of Lahey’s artistic practice is undoubtedly her use of colour. The forms, patterns and space within her paintings derive chiefly from colour, so that if we were to view a desaturated reproduction, it would become difficult to read the composition. As author Bettina MacAulay explains, ‘It is colour that is the dictionary and grammar of her ‘language of art,’ the visual lexicon to her artistic world.’2 This consummate use of colour is seen in the brilliant aqua and deep green of the river that immediately draw the viewer into the painting. Poet Martin Haley described Lahey’s paintings aptly as ‘songs of colour.’3

Lahey’s parents were unusual in their day in allowing their daughters to follow professional careers of their choosing. Accordingly, Lahey was among the first wave of Queensland artists who superseded the amateur lady artists of the nineteenth century, instead seeing themselves as professionals, seeking to earn a living from practicing art. As an exhibiting painter, art educator and advocate, Lahey became one of the most influential figures in the history of art in Queensland.

Art education was central to Lahey’s life, beginning primarily with her own training. Lahey was tutored in drawing and painting at Brisbane’s Technical College under Godfrey Rivers (1858-1925), before studying at the preeminent National Gallery School in Melbourne in 1905 and 1909, under Frederick McCubbin (1855-1917) and Bernard Hall (1859-1935).4 Lahey also took private lessons in watercolour from Walter Withers (1854-1914). After three years of war work in London during World War One, Lahey travelled to broaden her artistic and cultural horizons, and joined Ethel Carrick’s (1872-1952) still life classes in Paris and absorbed aspects of Modernism from New Zealand artist Frances Hodgkins (1869-1947) in Cornwall.5

Upon returning to Queensland, the deficiencies in art education and the availability of art publications appeared glaringly obvious. Lahey immediately sought to change this by giving lectures and arguing publicly for art to be an integral part of life in Queensland. Her greatest initiatives include the establishment of the Queensland Art Fund and the Queensland Art Library, which offered free access to Australian and international art to the then ‘culturally and artistically deprived citizens of Brisbane’.6 After World War Two Lahey began teaching children’s art classes at Queensland Art Gallery – an initiative still thriving today at QAGOMA’s Children’s Art Centre. Her legacy as an art educator and advocate in early twentieth century Queensland is unparalleled.

Unsurprisingly, with this persistent advocacy work, her own artistic practice suffered; between 1921 and 1936, she was prolific with twenty three solo exhibitions (including shows in Paris, London, and the United States) but from 1946 to 1963 she had just eleven solo exhibitions, only two of which were outside Queensland. We can only speculate on the artistic heights she would have reached had she not been distracted by her cause. Certainly, her mid-career works, including the present lot, are equal in quality to those being painted by the highly praised artists from the dominant Melbourne-Sydney axis.

ALL CURRENT & PAST CATALOGUE WORKS BY VIDA LAHEY 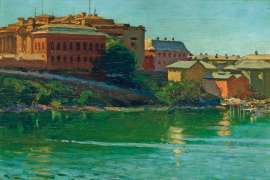 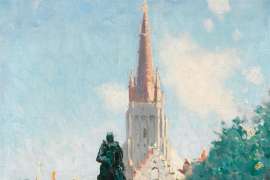 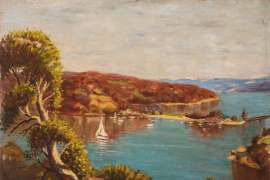 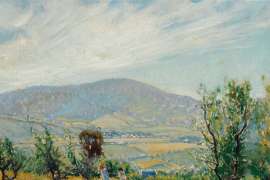