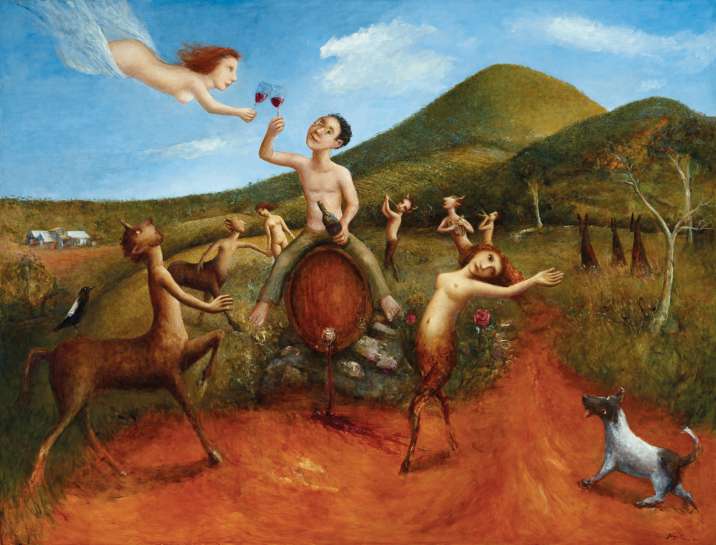 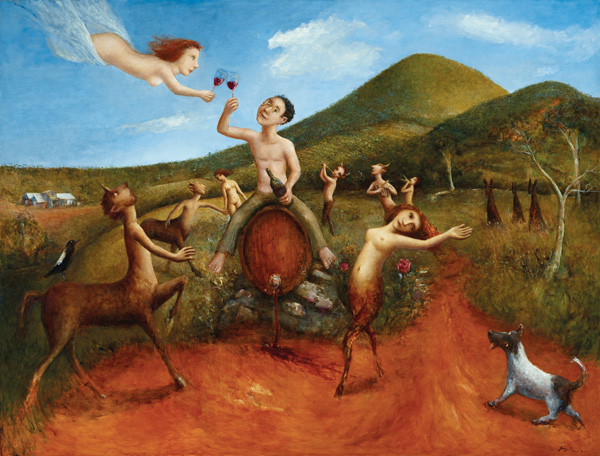 Garry Shead, who turns eighty this year, has been widely seen as one of Australia’s finest lyrical romantic painters of his generation. There is a softness and gentleness in his art – a daydream quality – where imagery from a closely observed local reality can seamlessly flow into fantasia. Animals, especially Australian native birds, kangaroos, emus and koalas, are not only anthropomorphised but adopt strong personalities and play a role in human affairs. The location in much of his art is unmistakably Australian, frequently set along the scrubby central coast of New South Wales or specifically around Bundeena in the Royal National Park, south of Sydney, where he has lived since 1987, but the world evoked in these paintings resembles that of a dreamscape.

As a young man, Garry Shead absorbed the influences of numerous artists and experimented with different conventions of art making. He embraced a number of art forms, including filmmaking and printmaking, both of which he continues to practice professionally through to the present day. He also embarked on several decades of study of the techniques of the old masters from Rembrandt (1606-1669), Titian (1488/90-1576), Velázquez (1599-1660) and Piero della Francesca (1415/20-1492) through to Salvador Dalí (1904-1989). Shead’s mature work that started to emerge in the early 1980s is exceptionally well crafted with the paintings carefully structured and the surfaces frequently built up through layers of glazes yet, at the same time, appearing loose and spontaneous as if miraculously breathed onto the surface of the painting.

Shead is a very well-read artist and much of his art has literary underpinnings without ever illustrating a literary narrative. D.H. Lawrence, the enigmatic poet Ern Malley and the great epic poet Dante are some of his literary sources of inspiration and, in each instance, he wills himself into the lives and literary creations of these writers. In some of his paintings and graphics the artist identifies with Lawrence, Ern Malley and Dante and as the artist creator enters the work as an insider rather than as an outside observer. Similarly, Shead in some of his paintings adopts the persona of Rembrandt or Velázquez and through his art reinvents their worlds. He views their worlds though the eyes of an Australian artist.

In Shead’s method of art making he has built up a repertoire of forms and artistic inventions and, in a manner similar to artists like Marc Chagall (1887-1985) and Sidney Nolan (1917-1992), these inventions frequently reoccur throughout his oeuvre in different combinations. Also, like many of the old masters and major moderns, Shead occasionally revisits earlier compositions so that although there are chronological boundaries for many of the main ‘series’ in his art – for example, the D.H. Lawrence series, the Royal Suite, the Dante series or Ern Malley cycle – these themes are sometimes revisited many years after their initial creation.

Shead’s The Supper 1993 is an important painting that brings with it an immensely rich framework of cultural references. It appears in the form of the classic Last Supper, where Christ reveals to his disciples that one of them will betray him and, before he takes leave of them, he initiates the holy Eucharist as a path for salvation. In Shead’s painting, the figure of the Saviour has been substituted by a D.H. Lawrence-like character that could also be interpreted as the artist and the disciples have become an all-Australian menagerie – with a kookaburra, a magpie, the kangaroo and the sulphur-crested cockatoo.

The table, which is covered by a white cloth, is slightly crescent in shape and reflected above it is a crescent-shaped field of soft warm light that together create an oval in the centre of the composition within which all of the action takes place. Surrounding this luminous centre is a cool subdued area of shade that has the effect of seemingly projecting the figures into the viewer’s space. At the ‘apex’ of this compositional oval is a traditional conical light shade with its protruding naked lamp that is reminiscent of a similar motif in Picasso’s (1881-1983) Guernica 1937. Symbolically this is the unlikely source of all illumination within the interior space of the painting.

Interpreting this painting is a matter of some complexity and the desire to read it as a light-hearted farce is immediately tempered by the feeling that we are witnessing some sort of ritual that is performed with a degree of dignity and solemnity. In an earlier version of the painting, of almost identical dimensions, The Supper 1992,1 there is a greater intensity with the figures more animated. The cockatoo grasps the chalice with wine, the kookaburra takes the bread and the kangaroo possibly in a sinister move is the one ‘who dips the sop’ and is identified as Judas. The magpie and the kookaburra appear in lively discussion, each denying that he is the betrayer of Christ.

In the version of The Supper that is subject of this essay, the figures appear less engaged, the implements on the table are less defined and the gestures of the participants are more symbolic. As is frequently the case in Shead’s interior compositions, the space is punctuated by doorways or windows that mark avenues for escape into the outside world and into nature. We catch a glimpse of a tranquil world set at dusk while within the interior space some sort of drama is unfolding that is being played out by symbolic presences. It is a haunting painting that casts its peculiar sense of magic.

To some extent, Shead is also an autobiographical artist where experiences from childhood or childhood memories inspire aspects of his art. Shead’s uncle on his mother’s side, Maurice O’Shea, was a legendary pioneering winemaker in Pokolbin in the Hunter region of New South Wales. Shead’s Bush Bacchanal, Pokolbin 2011, is an imaginative evocation of Maurice O’Shea sitting astride a wine barrel surrounded by male and female centaurs, Pan and his band of followers, and a flying toasting Nike figure. There is an unbridled celebration of wine in progress with a glimpse of Mount Pleasant in the background in reference to the Mount Pleasant winery that O’Shea established in 1921. The celebrations take place amidst the rich red earth that echoes the colour of the wine. The whole scene is witnessed by a large magpie on the left and by three sentinel-like kangaroos on the right. The progress of the joyous party is challenged by a barking dog in the foreground that confronts them.

When Shead was a student in Sydney, he met and interviewed for a student newspaper, The Art Wild Oat, the painter Norman Lindsay (1879-1969) and in some way he was attracted by the idea of pagan mythological creatures somehow being transplanted into the Australian bush. As a child, Shead would spend most Easter holidays staying with O’Shea and in whose house there were pen and ink drawings by Norman Lindsay. Shead remembered O’Shea as his art mentor in his childhood. The series of paintings that he made of O’Shea bring together the great winemaker and Greek mythology connected with Bacchus and the celebration of wine.

In Shead’s imagery, O’Shea, who in life was short sighted and wore thick glasses, appears as the bespectacled, slightly built youthful character that was an unlikely candidate for a bacchanal. O’Shea was described as ‘short but well built. He had a penetrating stare through his thick glasses, yet his eyes sparkled. His prominent nose had a lot to do with his acute sense of smell and taste.’2 O’Shea was rejected from enlisting in the military because of his defective vision and always felt that he was an outsider despite subsequently being championed as one of the great figures in the Australian wine industry. There is something that resembles a little farce in this Bush Bacchanal, Pokolbin, yet there is also joy and a celebration of hedonism.

All of Shead’s art opens itself to interpretation on a number of levels – there is rarely a simple or singular narrative. In this Bush Bacchanal, Pokolbin, it is not a transplanted classical arcadia into the Australian landscape as was the case with Sydney Long (1871-1955) and Norman Lindsay where the Australian bush was made to behave as if it was set on a Mediterranean island, but the bush in Shead’s painting asserts its presence and the celebrating figures appear incongruous and out of place. The earth reds, the beautifully rendered sky and the undulating hills stress their location in Australia. The sensuous scene before our eyes is more like a daydream, while the magpie, kangaroos and dog belong to the surrounding reality.

Bush Bacchanal, Pokolbin is both a memory painting and a dream painting, one where a wine culture transplanted from Europe has taken root within a pocket of unreality where it is celebrated by a curious band of revellers. It is also a very personal work by the artist where he celebrates a cherished childhood memory.

Sasha Grishin
Sasha Grishin AM, FAHA, is an Emeritus Professor at the Australian National University and works internationally as an art historian, art critic and curator. 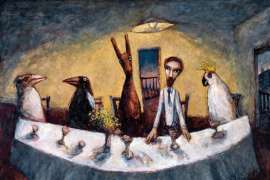 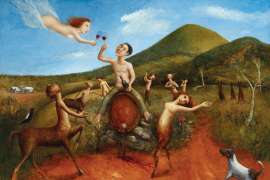 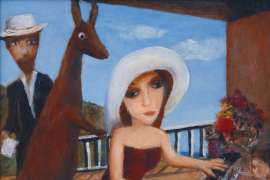