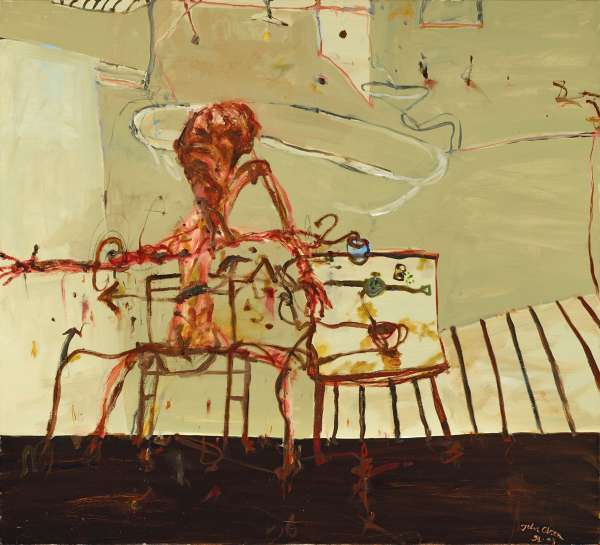 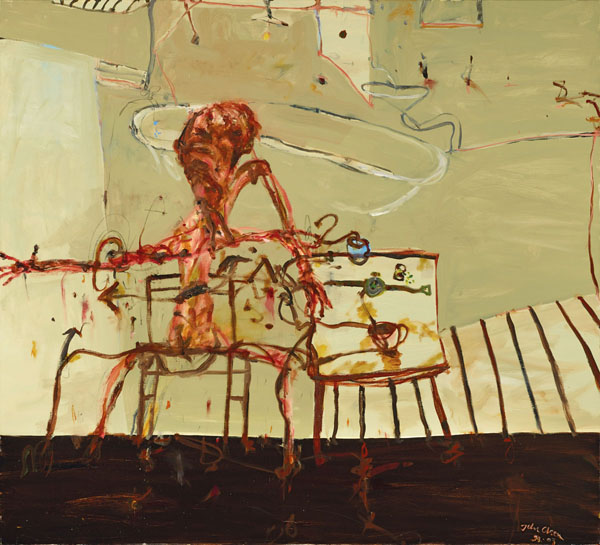 Ken McGregor and Jenny Zimmer chose Businessman Getting Ready for Work 2003 for a full-page illustration in their monograph on John Olsen, Journeys into the ‘You Beaut Country’. It appears alongside an excerpt from the artist’s diary praising the simple pleasure of a poached egg. This work was created during a particular stage in Olsen’s life. The 1990s and early 2000s have been described as difficult years for Olsen.1 His mother died in 1995 and he witnessed a succession of artist friends decline and pass away within these years. This experience amounted to a kind of reckoning with his own mortality. At this time his knees also deteriorated and he had the first of several operations necessitating a less active life for a period of time. In other words, the artist was ‘Confined to base: kitchen, bed and bath.’2

The paintings that came out of this era focus on the interior: baths and bathers, plates of paella, house cats. But for someone who has been characterised as a bon vivant, Olsen also grappled with a darker interior space. His Archibald prize-winning self-portrait Janus Faced 2005 post-dates the present work, and replicates its structure. That work is much darker, both in colour and content. Both however, describe the artist in the act of sitting at table, at rest and in motion. Olsen submitted a poem as his artist statement for Janus Faced, the last three lines of which are: ‘Self delights in well-worn brush/On an ancient palette./Time trickles & avoids defeat. Janus faced.’3

Businessman Getting Ready for Work can be read as an opposing force to Olsen’s Janus Faced. Whereas that painting was the artist sitting at dusk, reflecting on years gone before and preparing to meet those ahead, Businessman Getting Ready for Work appears to be Olsen focussing on what can be embraced in the immediate and domestic: ‘the self-delights in well-worn brush’. Small intimate pleasures that can be celebrated on a daily basis, can, after all, add up to minutes, hours and days. Even in the midst of suffering it is possible to focus on the good things.

The artist is depicted astride a chair at the breakfast table, the bathroom immediately behind him: a recognisably mundane shower curtain, cord pull blind, bathroom window and large white bath. Neither of these spaces is clearly demarcated, reinforcing the sensation of the blur of a busy morning. On the table are a cup of coffee, a watch laid out face up (time’s a ticking!), a salt shaker and a glass of water.

The subject is not committed to his action. One leg and one arm point away, running vaguely parallel to an arrow which also points away from the table. The face appears as a blur, partly in profile, partly in the act of turning away. Many objects in the painting are not aligned as if in real life, but this adheres to Olsen’s commitment to the communicating force of line within a composition:

Line, I saw, could organise and compose the picture. It’s the big joining force between disparate objects; it makes them part of the one dynamic web. Line has a mystical quality; to me the line is an urge, a passion.4

Olsen’s line here both articulates and animates the subject and his surroundings. We recognise immediately the workmanlike spaces, the subject’s haste, and his actions. We see him in both time and space, and we even glimpse his mood. This capacity to describe the fullness of life through his paintings is why Olsen is often referred to as ‘Australia’s greatest living painter’, his work held in all state collections as well as the National Gallery of Australia in Canberra, and multiple regional galleries.5

The title of the painting is a little joke. The ‘businessman’ is an artist. The stereotype of an artist is that of a character who derides the commonplace commuter, preferring irregular hours and bursts of frenetic activity. Olsen pokes fun at this caricature by placing himself as artist at the centre of a regular morning, off to do his business, the act of creation. Businessman Getting Ready for Work was painted when Olsen was seventy-five years old, already a hugely successful artist. We know from our current vantage point that Olsen has continued painting and holding exhibitions, most recently in January 2020. There can be no greater evidence for the value of consistency in application than this simple fact.

The painting is energetic but not urgent. The background is entirely coloured in a delicate pale green, symbolic of new growth and renewal, echoed by its morning setting. The beginning of a new day is another opportunity, another chance at life. There is joy to be found in knowing where you are meant to be each day. The ‘businessman’ may be running late, but at least he knows where he is going. If Olsen was questioning the value of a life lived for art with Janus Faced, he celebrates it in Businessman Getting Ready for Work.

Businessman Getting Ready for Work 2003 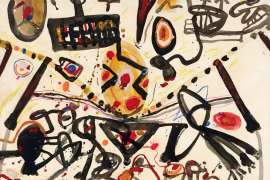 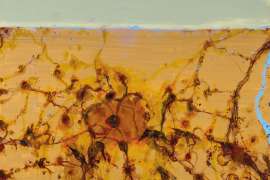 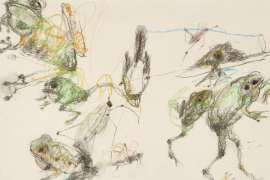 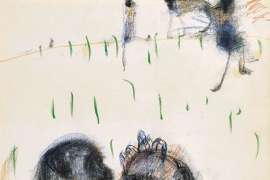