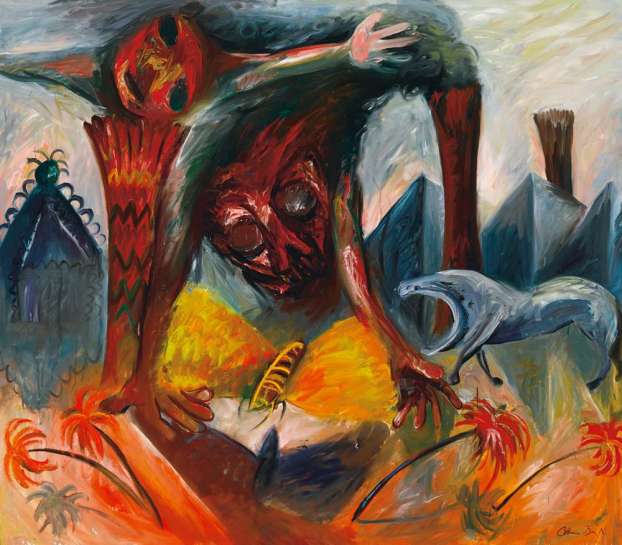 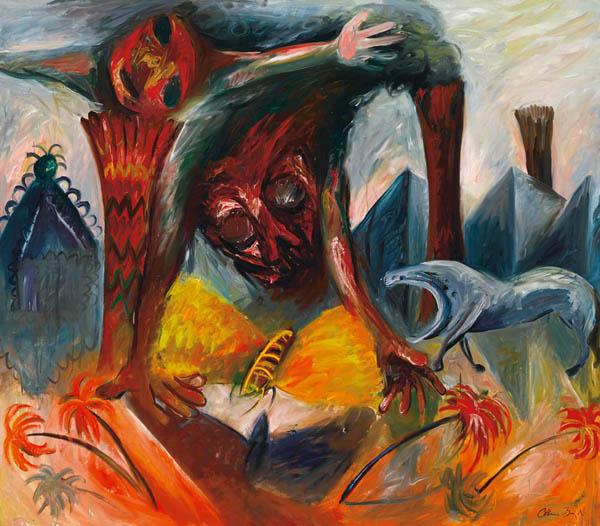 Although painted at a time when Arthur Boyd had been residing in London for a decade, Butterfly Hunter (1969) harks back to his wartime years and a previous work of the same name from 1943 which he presented to the National Gallery of Australia in 1975.

The 1943 version is completed in oil on cotton gauze on cardboard, hinting at wartime shortages and Boyd’s experiments with media and materials mentioned in Max Doerner’s 1921 publication, The Materials of the Artist and their Use in Painting, to which he was introduced by Albert Tucker.1  At 63.5 x 75.0 cm the 1943 painting is considerably smaller than the current work so the artist’s return to this subject in the late 1960s could have as much to do with Boyd’s greatly increased access to time and resources as to other considerations. However, the escalation of the anti-Vietnam War protests during the late 1960s certainly indicates common themes between the two periods.

As a person inclined to internalise his feelings and express them later through art, it is unsurprising that the artist often revisited subjects in the process of formulating his complex and highly personalised responses to the world. As well as drawing on his own experiences and imagination, the artist was equipped with a storehouse of imagery from a disparate array of sources. These ranged from the reproductions of European art works that he and John Perceval sought out at the State Library of Victoria, to literary works (such as those by Fyodor Dostoevsky) and even the illustrated Bible read to him by his artist grandmother, Emma Minnie Boyd (1858-1936).

The artist himself was to say of his wartime paintings:

‘In a painting I could not make my reaction to the war fit into any generalised theory. I had to make it private. To paint images of destruction and despair for me had to be done in a private way related to my experience.’2

During the war Boyd was assigned to the Cartographic Unit and although he moved around during this period he frequently had reason to visit the cartographic warehouse situated in South Melbourne. Boyd already had some experience of that area, but the wartime atmosphere of the industrial landscape and the interactions of the people he saw there clearly had a profound impact on him.

It was this landscape which he used as the setting for his ‘South Melbourne Paintings’, including Butterfly Hunter 1943 on which Butterfly Hunter 1969 is based. The depictions are strikingly similar, albeit on a vastly different scale.

At the very centre of the work is the dark and menacing butterfly hunter who, in pursuit of his brightly coloured quarry, spears through the centre of the bleak and polluted looking landscape with a force which sweeps the palm trees in the foreground aside. This ominous looking being has the appearance of anthropomorphised smoke, seemingly emanating from a nearby chimneystack and perhaps indicating a source of moral pollution. However, it has also been suggested that in Boyd’s paintings, smoke is associated with the kiln of his potter father which spread soot over the washing of their neighbours at Murrumbeena.3

This apparition is counterbalanced by a figure which surges from another chimney with its arms thrust wide representing a cruciform shape that dominates the skyline. The figure’s face is turned sideways, sandwiched between the top of the chimney and the upper edge of the canvas, a poignant symbol of constraint and suffering, which is in stark contrast to its more fluid counterpart.

A dog hovers at centre right, its gaping mouth frozen in a static howl, a figure which Darleen Bungey has described as ‘a nightmare suspended’.4 It remains unmoved either by the tableau playing out above or the plight of the butterfly directly in front of it.

In the earlier version the frenetic brushwork of the butterfly indicates intense movement, making it appear as if there is a chance that it may escape its pursuer, but in the current version the outcome seems less hopeful.

There were many reasons for Boyd to reflect on the Melbourne of his youth at this stage, including the fact that between May and September in 1968 he visited Australia for the first time in almost ten years.5 However, because of the erasure of places associated with his past, he was not necessarily returning to familiar ground, which may have prompted Boyd to dwell on his younger days. Following the deaths of his father and mother in 1959 and 1960 respectively, the family property at Murrumbeena was sold, subdivided and demolished. Additionally, a house with family associations dating from 1866, The Grange at Harkaway, which had for a time been owned by his uncle, Martin Boyd, was demolished to make way for a quarry.

Whatever his motivations, Arthur Boyd’s Butterfly Hunter 1969 represents a highly personal, complex and in some respects cryptic thirty-year meditation on the human condition by one of Australia’s most highly regarded artists.