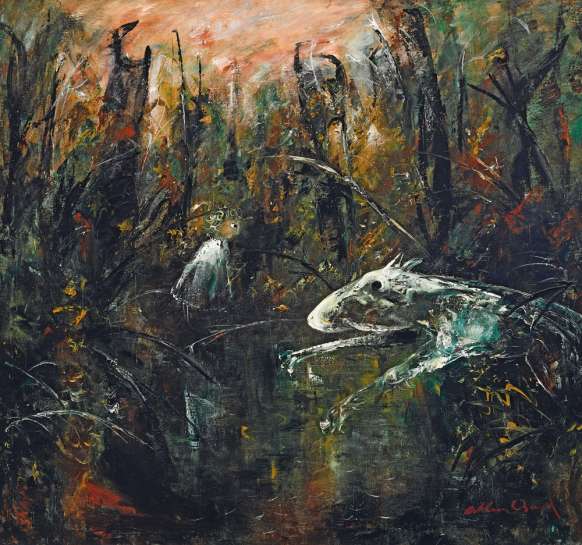 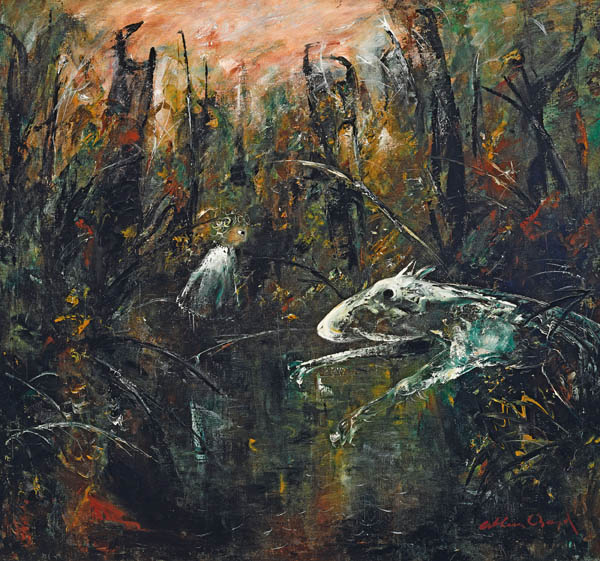 Arthur Boyd had been living in London for seven years when he painted the present work, and his position as a leading Australian artist on the international stage was well established. Following the success of his seminal Brides series in 1958/59, he left for London and continued the long established tradition of Australian artists who travelled to the UK and Europe to study the work of Old Masters, and experience the rich cultural milieu of art world centres such as Paris and London.

While based in London during the 1960s, Boyd continued to create darkly mythic paintings where primordial visions of the Australian bush become fused with figurative and animal inhabitants. In his Nebuchadnezzar series, also created in 1966, Boyd focused on the biblical tale of the King of Babylon. Rather than glorifying Nebuchadnezzar’s achievements Boyd chose to focus on the king’s descent into madness, portrayed against the backdrop of the Australian bush.1

In Child and White Dog by a Pond, as in the Nebuchadnezzar series, the bush becomes an anxious, claustrophobic space. This is expressed in its dark tonality that consumes much of the composition. The blackened tree branches stripped of vegetation immediately call to mind a bushfire charred Australian landscape. Into this setting Boyd introduces a symbol of innocence in the form of a small child illuminated in white. Towards the child a ghostly white dog appears to be leap into the scene with its front legs outstretched.

In this work and many others created in the 1960s, Boyd draws upon a cast of personal symbols. Boyd’s expressionist approach is summed up by Ursula Hoff, where the ‘manner and execution conveys states of feeling; distortion, illogical, spatial relations and idiosyncratic handling serve to convey the intense involvement of the painter with his theme.’2 Motifs that receive this treatment include the form of the ‘child-spy’ that appears in the present work. Boyd has made its presence felt in other works from this period, such as the painting Lovers in a Boat 1961 that formed the core of his important retrospective exhibition at London’s Whitechapel Gallery in 1962.

In both paintings a child is depicted in a simplified, triangular white dress, with curls of short, fair hair. In the 1961 work this angelic figure stands on the evening shore, and bears witness to the couple embracing in a boat. In Child and White Dog by a Pond the direction of her gaze is aimed at the dog that leaps into the picture plane. Yet in both works the protagonists appear unaware they are being observed. The couple are too immersed in their embrace, and the beast in the current work bears a black eye that appears like an unseeing hole, unaware of the child’s presence. This element of silent observation is responsible for the term ‘child-spy’ that has been used to identify this witnessing figure.3

When Boyd moved to London in 1959, he immediately began absorbing the work of the Old Masters housed in museums. The influence of these masterpieces on Boyd’s work during this period is well documented. One of the most direct motifs that reveal this link is the watching dog that appears in many of his works from the 1960s, which is directly inspired by the dog in Piero di Cosimo’s (1462-1522) The Death of Procis (1500–1510) in the collection of the National Gallery. While the dog in the current work is markedly different to de Cosimo’s, it reveals Boyd’s characteristic propensity to re-figure and re-imagine the same motifs to achieve various results. He describes this inclination toward repeated variations as analogous to musicians improvising upon a theme:

Musicians repeat themselves – they have a set piece with a few variations… similarly with painters who establish a set of images early in their career – for them it is also the process of gleaning from the same idea. They carry one image, one vision, right through their whole work. 4

In this work and others, Boyd continues his improvisation upon repeated motifs to evoke both innocence and existential angst. As in many of Boyd’s paintings particularly of this period, it is dreamlike, irrational, and avoids a direct narrative. Yet the painting resonates with tacit meaning that reveals itself over time and prolonged engagement.