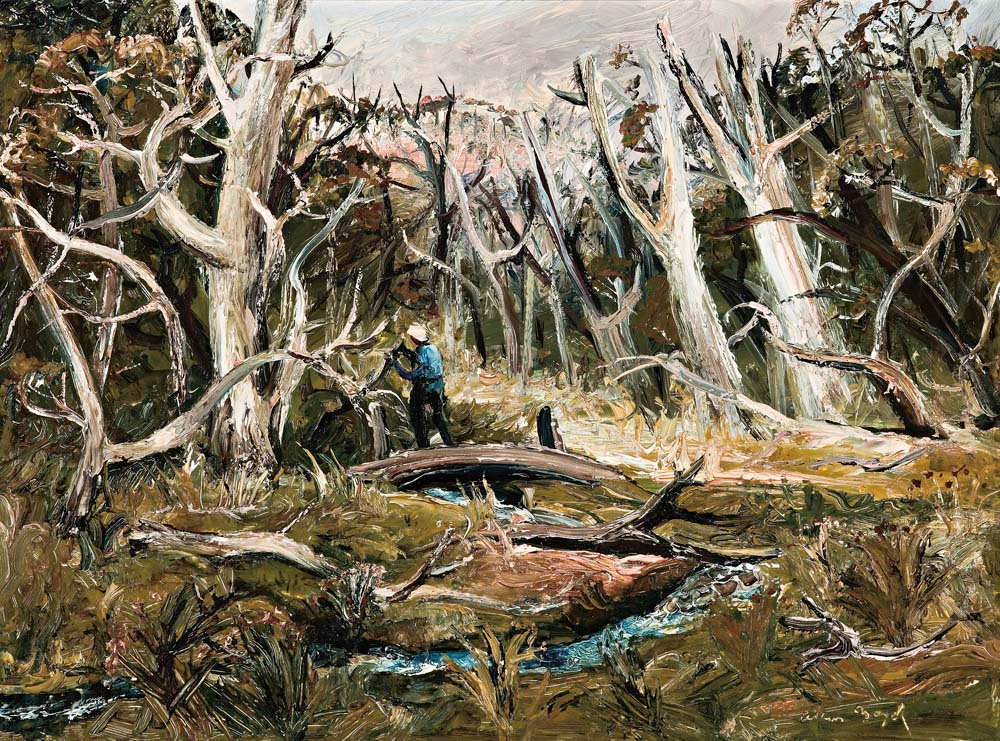 Between 1956 and 1959 Arthur Boyd made a number of landscape paintings inspired by the Victorian countryside. Following the success of his Berwick and Wimmera paintings of the late 1940s and early 1950s, he had already established his reputation within this much-loved genre. Yet the creative spell in which the present work was made followed an extended period between 1953-1955 where he had virtually ceased painting all together.  A trip to the Australian Alps in the summer of 1956 is credited for releasing the subsequent flow of works, and Boyd entered a highly productive phase until his departure for England in 1959.1

Revealing the confidence of this now mature artist, Boyd zigzagged between creating naturalistic paintings that responded to the environment, and the highly symbolic figurative works such as his seminal Bride series, which he also developed during this time.2 Boyd’s biographer Darleen Bungey writes that from the mid-1950s Boyd would paint landscapes whenever possible, and visiting friends would often find him crouched by the window, executing small paintings of various bush land scenes.3 Perhaps the landscape subject provided a welcome respite from the psychologically tense figurative works that also occupied his practice, as the artist took pleasure in depicting his homeland before his imminent departure to the UK.

Boyd’s landscapes were very much in demand, and such were the calibre of these works that a group of them where chosen to represent Australia at the Venice Biennale in 1958. In the following years Australian art received greater attention on the international stage than it ever had before, and with Boyd’s relocation to London in 1959 he was positioned at the vanguard of this new art from the antipodes. 4

However before the bright lights of London and international acclaim that awaited, the present work reflects an artist at peace with his surroundings. Cottles Bridge is a small town located 30km north east of Melbourne, and his enquiring spirit regularly pulled the artist to different parts of the countryside. From the Barmah Forest, Sorrento and Rye, to the Upper Yarra River and outskirts of the Australia Alps, Boyd went on numerous painting trips within Victoria during the late 1950s, and was sometimes accompanied by fellow artists such as Fred Williams and John Perceval.

Much like the different locations Boyd traversed, the paintings of this period alternate in mood and tonality, though as asserted by Philipp many works painted between 1958-1959 contain ‘water, flowing or standing, enclosed by the dense wilderness of living or fallen trees.’5 Cottles Bridge exemplifies this approach. Here a stream zigzags through the composition leading the eye to the small figure standing in the middle ground, immersed in their surroundings. A palette of earthy greens and pinkish hues contribute towards the muted serenity of the scene.

The bush setting in Cottles Bridge is less oppressive than in other works where Boyd visions the Australian wilderness as a challenging, primordial space. Rather, a sense of harmony exists between man and nature, though perhaps a slightly uneasy one. The sculptural forms of “white, claw-like, skeleton trees,” 6 usurp the painting from the realm of the pastoral idyll – and act as a constant reminder of the untamed strangeness of the Australian bush against which the small figure in blue is dwarfed.

Cottles Bridge reflects Boyd’s skill in creating original works that innovate within the established traditions of painting, rather than rejecting these conventions outright as many mid-century avant-garde artists sought to do. Boyd adapted the language of European landscape painting to express his own unique aesthetic and the particularities of the Australian bush – including the unsettling energies that he so often drew from it. Thus with a dexterous touch he achieves a timeless quality in the present work that is both local, and universal.