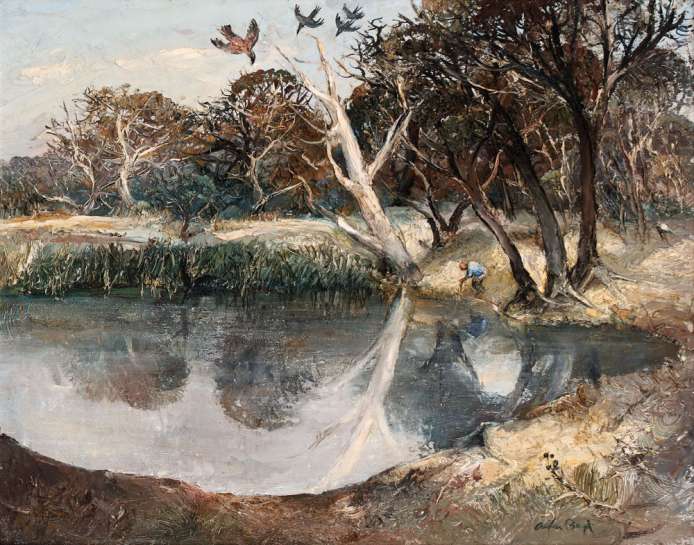 Eltham Dam 1959 is a fresh and generously painted canvas that reinforces Arthur Boyd’s reputation in the late 1950s as Australia’s leading landscape artist. Central to the work is a unique understanding of the Australian bush and a love of secluded semi-rural farms and still-impenetrable treed pockets that dotted Melbourne’s fringes. Eltham Dam was exhibited on the cusp of Boyd’s first trip abroad where he went on to establish himself on the world stage.

Writing in the Melbourne Herald, art critic and long-time friend, Alan McCulloch captured Boyd’s progressive ascent as an artist. ‘Boyd Knows the Bush’ was the title of his review of the exhibition held at Australian Galleries. According to McCulloch, Boyd had gone through a succession of stages and was now in an ‘“old master” phase probably his best of not his last.’ McCulloch discerned a greater luminosity in his works and warmed to Boyd’s intimacy with his chosen subject and his ability to make the viewer feel a part of the country and its daily occurrences. This included the ubiquitous presence of ornithologically correct birds that cast an eerie pall over mysterious and primeval-looking scenes, creating the feeling that we are ‘making their acquaintance for the first time.’1

Eltham, a bushy hamlet to the north-east of Melbourne, is known for its bohemian lifestyle and grass-roots philosophies. The area held a special relevance for the Boyds – Arthur’s uncle Penleigh Boyd built a house and painted many Yarra River scenes nearby at Warrandyte and his grandparents had lived further east at Yarra Glen. From the late 1940s and 50s, it was also the home of friends such as the aspiring filmmaker Tim Burstall and his wife Betty, who established the famous La Mama theatre in Carlton. There were thriving artist colonies at Montsalvat, and at ‘Dunmoochin,’ a property owned by painter Clifton Pugh at nearby Cottlesbridge. As the celebrated Australian architect Alistair Knox recounted: ‘artists would descend on Eltham late on Friday and Saturday nights after serious drinking and debating sessions at Melbourne hotels.’2

Arthur preferred to find quiet nooks to paint among the fertile soil, arabesque gums and various waterways and dams. Eltham Dam is a work that possibly painted in the company of the Burstalls. Tim Burstall was completing his film on Boyd’s 1958 Bride series entitled Black Man and his Bride: Australian Paintings by Arthur Boyd (1960), the second title produced under Burstall’s fledgling Eltham Film Productions.

In Eltham Dam Boyd recreates a depiction of country in which ‘his image resides in the trunk of every tree.’3 It is a sylvan world, untouched by encroaching suburban Melbourne. The Burstall’s had bought a vacant block to build an environmentally friendly home and garden situated on the newly created Panorama Heights Estate, Napier Street, Montmorency, on the border of Eltham. The dam at the end of the street was probably the subject of Boyd’s painting. If so, Boyd chose to ignore the encroaching subdivisions and revel in an unruly primeval landscape in which large birds swoop down from above like fighter jets in formation. However, implicit in the painting are also references to a world partly tamed. The dam is clearly man-made and the figure bending over at the water’s edge humanises the subject by providing a sense of scale and purpose.

Boyd’s 1959 Australian Galleries exhibition included numerous examples of the juxtaposition of the primeval and the partially domesticated landscape, familiar. Old Waterwheel 1959 is a similarly sized painting to Eltham Dam that the Art Gallery of Western Australia acquired the year after in 1960. Old Waterwheel depicts the Yarra River in nearby Warrandyte. It captures the strong river current as water dances over rocks. The precarious nature of the crossing is enhanced by the barking dog and the oversized black cockatoos screeching overhead. Similarly, in Old Mine Shaft 1958-59, we find interaction between humanity and nature in a gentler and more reflective guise. A lone figure stops momentarily as they meander through tall grass and entangled undergrowth. Each of the paintings inculcate the value of direct communion with nature, experienced contrasts between luscious thick paint applied by palette knife, and the thin flicks of a pointed brush tip.

Arthur Boyd was at the peak of his career when he painted Eltham Dam. Although the Bride series of 1958 had been confronting for many people, it launched Boyd into a totally new sphere. Soon he was to feature in important exhibitions following the relocation of his family to England in late 1959. His 1962 Retrospective Exhibition at the prestigious Whitechapel Gallery, London, featured these paintings from 1958 and 1959 and showed the full range of his artistic powers. 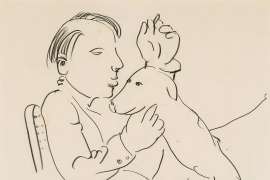