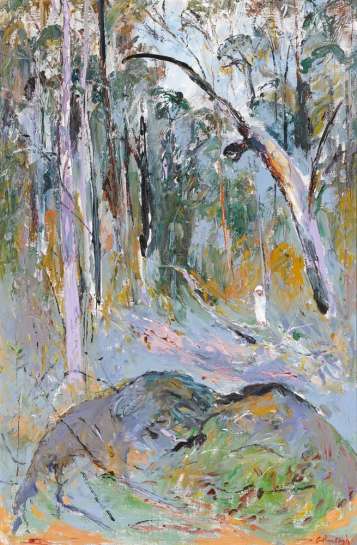 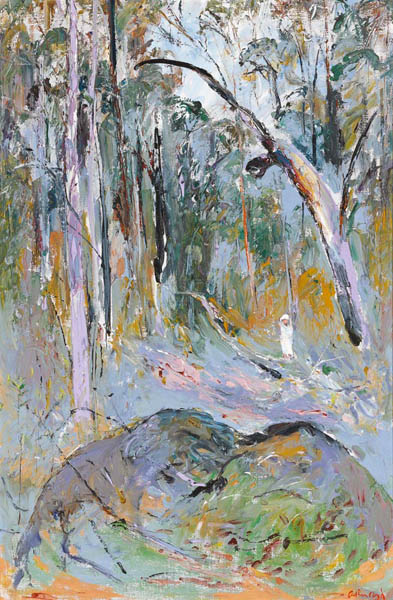 Arthur Boyd was one of Australia’s most prolific and original artists. In a career that spanned six decades, Boyd compiled an impressive legacy of paintings, drawings and prints. While most of the works sprang from literary texts or directly from his fertile imagination, many others were a direct and intuitive response to the Australian bush or English forest.

Whether in Australia or overseas, Boyd used painting as a way of celebrating familiar environments and refamiliarising himself with local light and climatic conditions. Boyd was a strong advocate for the environment and its restorative powers and many of these paintings are celebrations of nature.

Figure in the Bush II is likely to have been painted in the early to mid-1970s, possibly around the same time that Boyd had returned to Australia to take up a residency at the Australian National University. During this period, Boyd painted on the outskirts of Canberra and produced a body of work which contained figures placed in sun-bleached paddocks and sparse thickets of scrub.

This painting features a bush scene from which emerges a small figure. The figure appears to be that of a girl or young woman who is shrouded in a white cloth and hood. The bush around her is quite dense and the paint is laid down in a thick impasto to create that effect. A familiar Boyd sky and clouds are discernible through the canopy of trees, while the curved trunks and foreground grasses are also elements that we recognise as his.

Arthur Boyd often looked back to his own art for inspiration as well as to that of his forebears. Figure in the Bush II reworks a familiar theme from Australian Impressionism and revered artists such as Arthur Streeton (1867-1943), Frederick McCubbin (1855-1917) and Tom Roberts (1856-1931). The theme of the lost child was one that featured in many of their works and stemmed, in part, from the nineteenth century fascination with familial separation and a fear of the unknown. Boyd’s version of a child lost in the bush appears to be a contemporary reworking of McCubbin’s Lost 1886. This well known and much loved work from the collection of the National Gallery of Victoria features similarly dappled sunlight, tightly clustered, erect trees and spindly native grasses that waver in the wind. There is even the suggestion of peeling bark lying on the forest floor.

Boyd may also have had in mind the work of Tom Roberts in the area of rich impasto. Arthur Boyd’s earliest paintings of the landscape around Murrumbeena and Rosebud, on the Mornington Peninsula, during the mid to late 1930s were heavily indebted to Roberts and his style of painting using small rectangular facets of paint. The palette of buttery yellow, grey and pale blue was also something he adapted from Roberts.

As Arthur Boyd’s painting progressed, he developed a very recognisable style and approach. Inspired by the colours, light and textures of the Australian bush, Boyd set up his easel and fully immersed himself in his surroundings for hours on end. The lovely accents of mauve, green, blue, pink and ochre and the dragging of the paint quickly and assuredly across the surface reveal an artist in full control. Figure in the Bush II is a fresh painting that reveals Boyd in touch with the landscape and with his chosen medium. Neither threatening nor alien, the bush is now somewhere to be savoured and enjoyed.