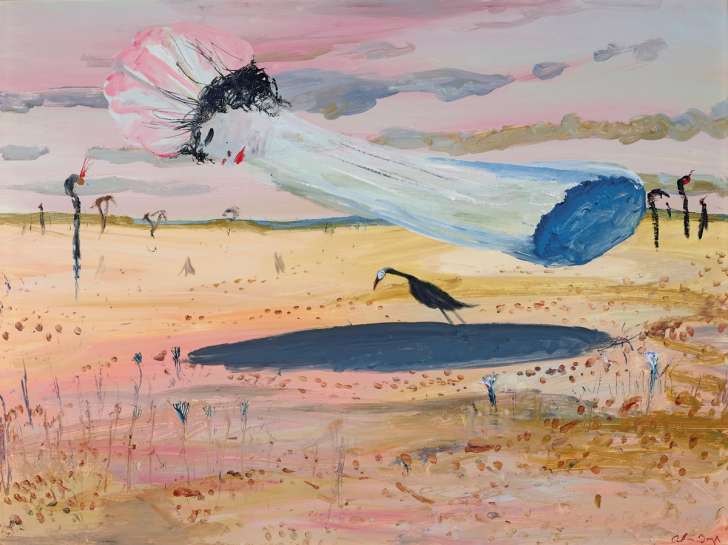 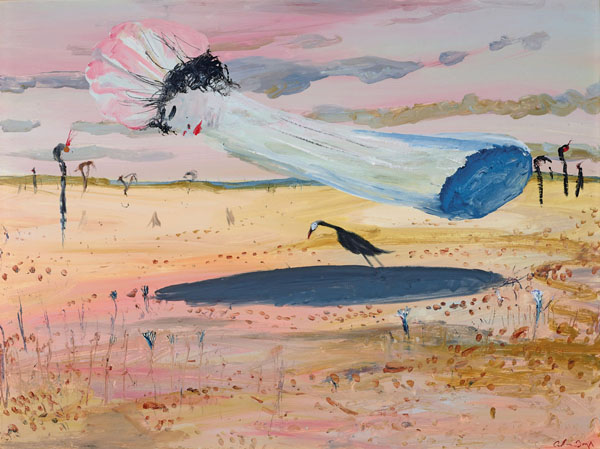 Like his good friend Sidney Nolan (1917-1992), Arthur Boyd knew the value of a leitmotif: a theme that could furnish him with a story which could be turned to good use at will, become a framework or testbed to experiment with new ideas and be subjected to serialisation. Albert Tucker (1914-1999), the contemporary and friendly rival of both artists, also understood the potential of devising these leitmotifs, which Tucker referred to in his characteristically dry way as a ‘breeder,’1 but it was Nolan with his Kellys and also Boyd who most actively exploited the idea.

Boyd’s Bride series of paintings can be seen, to some extent, as a response to Nolan’s Kelly. The subject was uniquely Boyd’s own. The original series titled ‘Love, Marriage and Death of a Half-Caste’ was created during 1957 and first exhibited at Melbourne’s Australian Galleries in 1958.  The paintings were a response to Boyd’s witnessing of the living conditions of indigenous Australians during a trip to Central Australia in 1951. These allegories were deeply felt and yet poignant. They were at the same time a reminder to us all of a social failure, while expressing something of the depth and fatalistic sense of futility of the situation. They are an entirely apt representation of the state of aboriginal affairs at the time (and since), inasmuch as they succinctly make reference to the confusion, the failed efforts of the protagonists, the history of indifference as well as the damage done by misguided and well-meaning individuals and difficulties of resolving matters of momentous complexity. It is entirely characteristic of these paintings that their iconographic program should defy attempts at interpretation. Boyd is like an explorer whose forward progress has a purpose only inasmuch as it brings forth new experiences and possibilities. The paintings mark this progress.

It was also typical of Boyd that these already highly sophisticated, unresolved allegories were enriched by his personal life and his efforts to come to terms with his circumstances as a professional artist, as head of a family, and as an Australian. The ideas introduced in the Bride series are the foundation of much of the work Boyd produced from that time onwards.

Elevated above an arid landscape, we see the figure of the Bride as she glides over a pond. Weightlessness, already used by Boyd in the earliest versions of this subject, can be seen to suggest that the figure is powerless, drawn away by unseen forces. The concept is derived from the work of Marc Chagall (1887-1985), one of Boyd’s primary artistic influences. She appears to be carried forward by a gust of wind across the featureless plain, although in fact the plain is not so empty of features. The ground is variously textured and covered in plants: weeds, thistles and there is a predatory bird purposefully (in contrast to the directionless Bride) stalking through the water. Through the middle distance we see curiously hook-shaped trees before the darker line of the horizon. The sky is figured with breezy murky clouds, strongly suggestive of a storm and a promise of rain. The dreamlike imagery conveys a delicate mood, sense of impending change, with the aridity poised to be supplanted by something else. Boyd leaves it to us to wonder what the future holds.  The Bride, the dark bird, and the atmosphere are characteristically and powerfully evocative and vaguely disquieting, while the landscape itself, despite the weeds and uneven dryness, is vaguely re-assuring, offering a sense of respite.

The Brides became, after their first introduction in the mid 1950s, one of Arthur Boyd’s most enduring themes. They continued to provide Boyd with a rich source of inspiration and remain a highly important contribution to the Australia’s pictorial heritage.