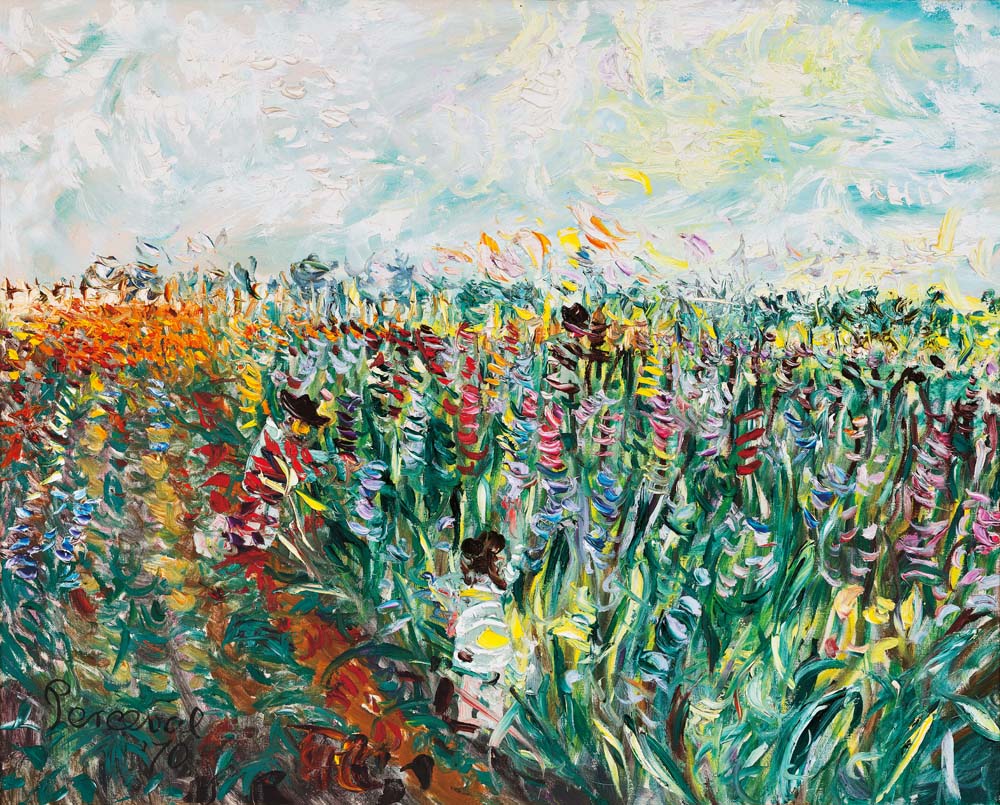 John Perceval, a prodigiously talented yet largely self-taught artist, held his first solo exhibition in 1948 at the age of 23 and went on to win the Wynne Prize for landscape painting in 1960. The following year, several examples of his work were featured in the Whitechapel Gallery’s iconic 1961 exhibition, 50 Australian Painters, held in London where Perceval was to live for two years from 1963, before returning to Australia in 1965.

This protracted period of artistic and commercial success was sandwiched between an unhappy childhood, marred by the divorce of his parents and a teenage battle with polio, and later life struggles with addiction and mental illness. Poet and close friend, Barrett Reid, was to say of Perceval’s childhood that ‘What happened then was to shape both his art and his life which was to move in intense cycles of paradisical [sic] joy and dark despair, creation and destruction.’1

Perceval’s early childhood was an unsettled one, with periods spent living on an isolated Western Australian wheat farm with his irascible father being interspersed with time at his mother’s house in Perth. By 1935 his mother had remarried to William de Burgh Perceval (the artist’s birth name was Linwood Robert Stevens South, although he had called himself John from an early age) and it was in that year that Perceval moved to Melbourne. During this period the Percevals were to spend time with Clive and Alline Rowan and their children. Alline, who was the daughter of noted academic and art collector, Sir Baldwin Spencer, was to inherit his collection and it was through these paintings that Perceval received his initial artistic education.

Perceval’s passion for art was evident from an early age, with a journalist who visited the convalescent home where he was housed as a polio patient noting that he kept a reproduction of a Van Gogh painting beside his bed, unlike the other boys who preferred photographs of footballers. The result of their meeting was an article entitled ‘Crippled Boy of 15 Paints Like a Master’, which was published in Melbourne’s Sun-News Pictorial of 1938.2

Perceval’s artistic associations further broadened when he met Arthur Boyd (1920-1999) during the war and was drawn into the company of artists from the Angry Penguins group, a loosely knit coterie inspired by Max Harris’s journal of the same name, which was established in 1940. Perceval was to live with the Boyd family at Murrumbeena, later establishing the Arthur Merric Boyd Pottery with Arthur Boyd and Peter Herbst.

Despite his preoccupation with pottery, Perceval continued to paint and in the immediate post-war period completed a series of Breughelian genre paintings, injecting scenes of bucolic industry with a characteristic wry humour, thus producing a kind of ironic allegory. However, in her 1992 publication on the artist, Traudi Allen locates Perceval’s serious engagement with landscape painting as beginning in the mid-1950s, with the landscapes of his early years merely serving as backdrops for genre scenes.3

In landscapes such as Deserted Garden at Hampstead Heath (1963),4 dashes of paint dart and flash across the surface of the canvas like minnows, imbuing the work with a sense of vitality and movement. This intense brushwork and the co-mingling of elements within the landscape to form an intriguingly interwoven whole are also evident in Perceval’s later works, although in these the artist revels in bold brush strokes, luscious impasto and a glorious intensity of colour.

In Gladioli Farm 1970, the figures are subsumed into the surrounding landscape, as is the case with Farmer in the Wheatfield Smoking his Pipe 1971,5 in which the farmer is barely distinguishable from the wheat stalks which envelop him. Barrett Reid observes that with Perceval, ‘The landscape creates a sense of the painter being surrounded, enclosed, of being part of what he sees, ’ going on to note that ‘He would rarely paint that far horizon, always the landscapes he sought would be close up to his eyes, a world which wrapped
him round.’6

In Gladioli Farm, the majority of the picture depicts a riotous field of gladioli, with the strong verticals of the stalks contrasting with horizontal splashes of colour representing the flowers themselves. It is as if the cloud-filled sky, which also exhibits the artist’s distinctive mark making, is there more for the benefit of the viewer than for the occupants of the field, who remain absorbed in the flowers which surround them.

In this captivating work, we see a landscape emptied of distractions and allegorical statements, in what constitutes an energetic and joyous evocation of man’s engagement with the horticultural world. 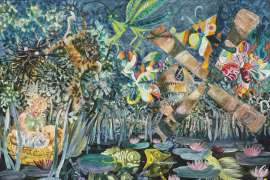 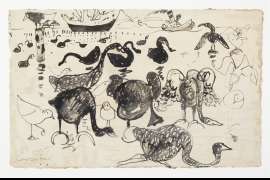 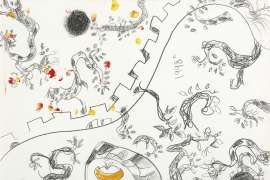