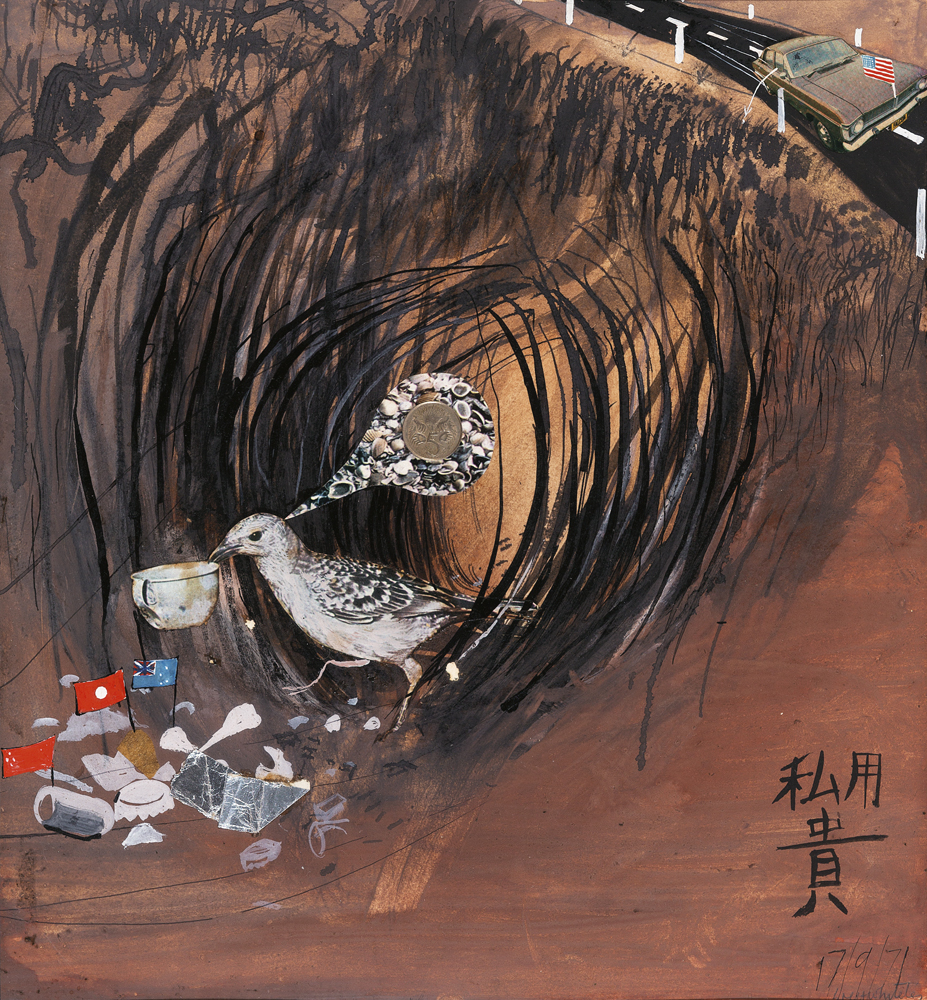 ‘If there is such a thing as reincarnation… I would love to come back as a bower bird’.1

Almost more than any other subject, Brett Whiteley painted birds – whether as individual studies of the winged creatures or as part of a larger composition, birds gave the artist the greatest sense of release. Whiteley confronted many other difficult issues in his art and birds and landscapes proved to be a means of escape – a world without the pain of confrontation and conflict. Throughout his career, he would return to the subject as a means of respite from the psychological undertaking of his creative and personal challenges.

Whiteley started painting birds in earnest at the end of the 1960s, noticeably around the time he was working on the monumental magnum opus, The American Dream (1969), whilst living at the Chelsea Hotel in New York City with wife Wendy and their daughter, Arkie. The family arrived in 1967 which coincided with one of the highest points of political turmoil in American history. What he witnessed during his time in America had a deeply disturbing effect on Whiteley and this was projected in the art he produced while working there. The American Dream (1969) was a reflection on the ‘madness’ of American politics, society and life at that time. Whiteley painted birds into the composition as symbols of optimism and tranquility amongst the violence and struggle.

The family abandoned America for Fiji in 1969 looking for a calmer life after the turmoil of New York. Here, Whiteley had found his Eden, brimming with tropical green landscapes, azure water and birds in abundance. In the same tradition as Paul Gauguin (1848-1903), Whiteley fled the painful reality of civilisation for the romantic escapism of the Pacific. Whiteley studied the bird life of Fiji in great detail, the majority of his work from this time was depictions of the landscape and birds, namely fruit doves, herons and hummingbirds. It was during his time on the idyllic island paradise he declared the orange Fiji fruit dove to be the most beautiful bird in the world. The act of painting his surrounds proved cathartic to the artist who, during his time in Fiji, would produce one of the most beautiful groups of paintings of his career.

‘I can’t think of a nicer theme…a celebrative, heraldic theme, than birds’.2 Closer to home, Whiteley’s affinity with birds endured. The present work, The Great Bower Bird 1971 depicts the bird in its nest, gathering all sorts of ephemera. Here, Whiteley has placed a cocktail-sized Australian flag, an inverted Japanese flag and what appears to be a People’s Republic of China flag. In the background, a Falcon tears past the nest with an American flag sitting proud on its bonnet. The artist’s attitude towards America which developed during his time there in 1967-69 can be seen in the wry placement of the flags. Perhaps Whiteley has created a self-portrait with himself as the bowerbird - wandering through life, collecting ephemera and nostalgia along the way. The artist’s studio on Raper Street, Surry Hills, is testament to the artist’s habit of collecting. Following the artists death in 1992 the New South Wales government purchased the building and it is now open to the public as a studio-museum, dedicated to the work of Brett Whiteley.
‘People ask me ‘why paint birds?’ and I look at them dumbfounded! I’ve got no answer, except that they are the most beautiful creatures’.3