The numbers don’t lie. CJ Hendry, born in South Africa, raised in Australia and now based in New York, has built a social media empire considerably larger than her peers. And she’s done it by harnessing the power of her art.

On Instagram, Hendry has accumulated almost 600,000 followers, more than, say, Jeff Koons and Cindy Sherman and not far behind Damien Hirst, one of the art world’s great self-promoters, who has more than 800,000. Closer to home, she has more followers than all the directors of Australia’s major galleries combined. More than their galleries too. And if some aspects of her work—the hyper-realism, the intersection with fashion — bring to mind Michael Zavros, another Brisbane artist, albeit one who works rather more within the conventional gallery system, then one clear point of difference can be found, yes, on Instagram, where Hendry has more than five times as many followers. It’s quite the turn of events for a university drop-out who once described her work simply as scribbling.1

Could we be reading too much into these numbers? After all, it’s just Instagram, the more palatable arm of Facebook, a platform dominated by names like Cristiano Ronaldo, Beyoncé and Taylor Swift. But there’s a reason those names are big on Instagram, just as there’s a reason the majority of visual artists have a presence there as well. This is a visual platform, individually curated, its message carried directly to the viewer, with more than a billion active users worldwide. The business of art is evolving into new forms of expression—and who’s to say that Hendry, whose first major commission came via Instagram, hasn’t simply adjusted to this new realm faster than everyone else? Kanye West paid attention when she put his face on a dollar bill. Everyone else is just catching up.

Social media can only take us so far, of course: there needs to be something behind the curtain. The first point to make about these two rich, globby streaks of colour, one red and one blue, is that both were created using pencil. They’re drawings, in other words. A playful sort of self-mockery can be felt in Hendry’s choice of subject, since she insists (on Instagram) that she can’t really paint. But these drawings, like much of her art, are the result of careful discipline and many, many hours of labour. Lean in close and the devotion is impossible to miss.

Hendry made her name with a series of photorealistic drawings posted on social media. Her favourite subjects were fashion items, luxury goods, each one packed with detail, and mostly in black and white. In 2015, when she moved to New York, she felt a renewed sense of creative freedom and found herself welcomed into the city’s fashion and art communities. Her profile grew, online and off.

Then came her collaboration with Christian Louboutin, the craftsman of choice for well-heeled heels, in a show for Art Basel Hong Kong. It was the first time Hendry had worked with a brand in this way, and the results were striking. ‘Some artists now are quite industrial in their approach,’ Louboutin said, ‘but in her work you almost find a patina, a handcraftsmanship in the way she uses colours.’2

The key to their collaboration was colour rather than product. Art Basel guests came face to face with an assortment of her colours, all displayed like samples in a workshop, each one as tangible as the next. In Hendry’s hand, thick oil paint was given a materiality that threatened to break free from the surface. Which is why you really had to be there: even when images find a wider audience online, nothing comes close to the real thing.

ALL CURRENT & PAST CATALOGUE WORKS BY CJ HENDRY 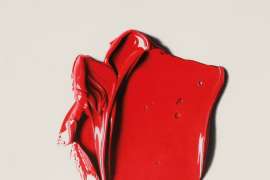