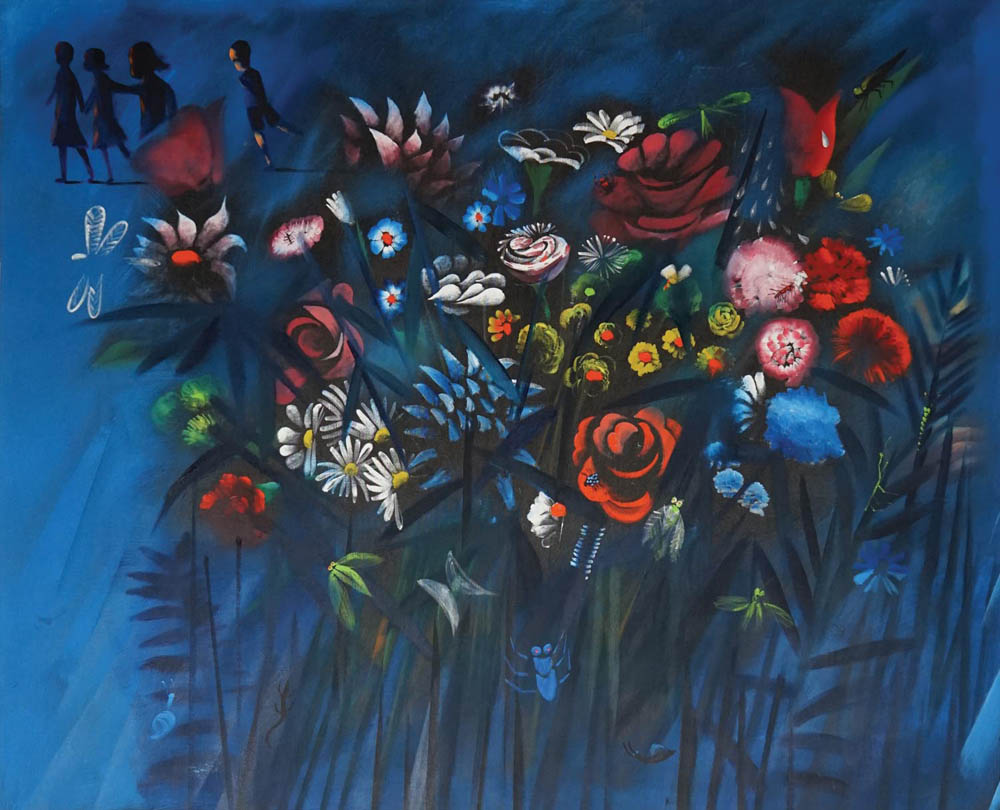 Flowers are a recurring motif in the art of Charles Blackman from the earliest days of the Alice in Wonderland series. In the Alice paintings they teeter in overly large vases, dominating the table and those sitting around it. They create an artificial landscape as mad and contrary as the story, exploding in a riot of colour, texture and movement. Flowers in bunches and in vases feature frequently in Blackman’s paintings and prints, often in the hands of young women who hold them to their faces, perhaps for their perfume, perhaps simply for the nearness of natural beauty. The blindness of his wife Barbara gave flowers a special meaning, as for the sightless person they are a doorway to the senses. At times they are included simply for their colour, a way of including a brilliant contrast to the darkened night scenes he made his own.

In The Insect’s Garden something else is happening, as the lush profusion of flowers is now the subject of the work in its own right. There are a group of children, friends perhaps of his iconic schoolgirls, but these are no longer the focus of the work.
Two young girls head away from the garden, a third reaching out to hold the shoulder of one while a boy runs alongside. A flick of colour tells us that they are heading away toward the light, leaving the night garden to the insects and tiny animals that will live on undisturbed until dawn - the human interlopers are only allowed temporary access before night falls. Whether it was a simple image of schoolgirls playing in the street or the seemingly innocent characters in a children’s story, Blackman managed to invest his paintings with a darkness and quiet menace seemingly at odds with their light and unchallenging subjects. There were dark undercurrents running through many parts of the artist’s personal life and these were often manifested in subtle moments that managed, sometimes unintentionally, to destabilise the viewer.

Much of the charm of this work comes from the technique used by Blackman to create a striking and vibrant image. His early graphic art training and extensive work as a printmaker is evident in this hybrid work, which combines a regular painted surface with a series of stencilled images that build up a powerful pattern on the surface of the canvas. The leaves and stalks of the plants making up the garden have been applied in paint through a cut stencil, a technique he was to apply in his printmaking on many occasions. By using the stencil he has been able to build up layers of subtle tone that works to support the brilliant colour of the flowers. At times the paint is translucent, layered over the intense blue background, while at others it is applied over the top of the coloured petals, further creating an illusion of depth. Some of the petals of the different flowers have been directly laid in with a brush, while for others a stencil has been used, most noticeably with the red rose at the centre of the composition. With the painting more or less complete, the artist has then painted in the quirky denizens of the garden; the insects, a lizard, a snail and the beetles that come into action once night has fallen. The miniscule world of the garden goes on, safe from the inquisitive eyes of the departing children. The use of stencils has given the work a surety of touch and a strongly stylised, graphic quality that links the painterly side of Blackman’s oeuvre with his vast body
of graphic work that has seen him become, arguably the most popular and widely collected Australian artist of the past sixty years. 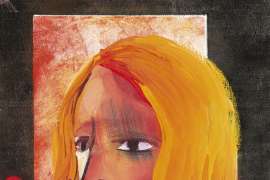 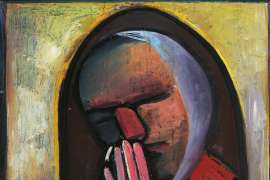 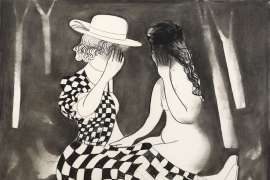