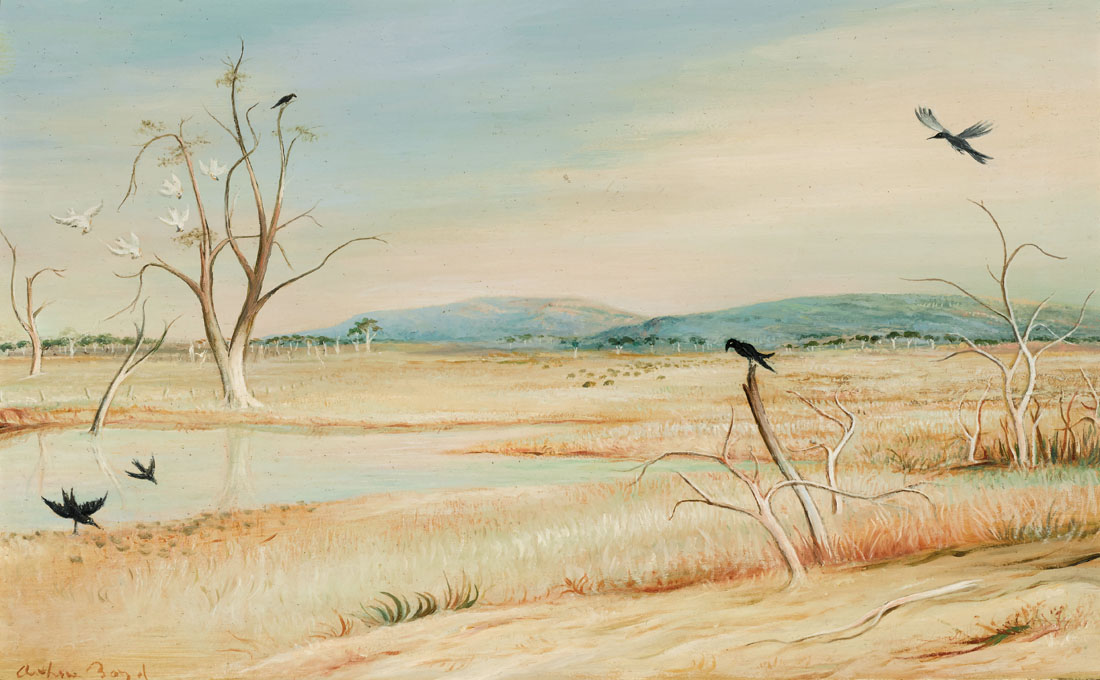 A reader of the art reviews in Australian newspapers before World War II would note a familiar theme common to many – the reviewer would wax lyrical on the charm and beauty of the subjects chosen by the artist and then opine as to how faithfully they had been rendered in the painting. The subject was as important as the artist’s interpretation, with little interest in creativity and expression. The war changed many things and a new generation of artists, now in uniform, were being posted to various regional locations of military rather than scenic interest. Sidney Nolan (1917-1992) found himself out on the broad Wimmera plains at Dimboola, Albert Tucker (1914-1999) wintered in Wangaratta while a young Arthur Boyd became a truck driver, working the route from Melbourne to the Headquarters of the Signals Corps at Bendigo. Almost by osmosis they absorbed the elements of the landscape around them and, when peace returned, they were drawn back to the country to find inspiration for their art. Arthur Boyd travelled on from Bendigo to make a working visit to Horsham, the main town in the Wimmera district, almost half way to Adelaide from Melbourne. Just as Nolan had found at Dimboola, it was the very ordinariness of the landscape that held its appeal. The land was flat, ideal for cropping and grazing and, for much of the year, dry and yellow under the summer skies. No charming fern gullies, rippling brooks and weeping willows, just the occasional muddy dam surrounded by dead gums, now home to flocks of cockatoos.

Arthur Boyd painted the Wimmera landscape on many occasions, drawn to the simplicity of the landscape and the life of those who farmed it. The works he made in the Wimmera were a world away, both literally and emotionally, from the tortured biblical scenes occupying his time at home in Melbourne. He studied the scenes carefully, including many small moments of colour and interest – birds flying down to the waterholes, the plants in the paddocks and the cattle grazing in the distance. Invariably there would be a farmer going about his business, trotting by in an old cart or attending to jobs in the field. The compositions would be balanced by the bulk of the distant Grampians, the mountain range to the south of Horsham where he ventured to paint the great rock outcrops and ancient trees.

The Wimmera pictures were exhibited in Sydney in 1950 and made an immediate impression on the public and the galleries alike. Both the Art Gallery of New South Wales and the National Gallery of Victoria acquired works, the latter choosing the landscape entitled Irrigation Lake, Wimmera 1950, since recognised as one of the gems of the collection. The present work carries the same title and bears some remarkable similarities to the NGV painting. While only a small study compared to the finished painting, it would appear to depict the ‘other half’ of the same irrigation lake – effectively a mirror image of the other. The composition fits almost exactly to the centre of the lake and, almost by design, there are the same number of cockatoos and crows in both paintings. One can imagine the artist making two small plein air sketches, one looking to the left of the lake, the other looking to the right. On returning to the studio he has chosen to make a large finished painting of the left-hand sketch, a painting that in the same year would find its place in the most important gallery in the country. Boyd would revisit the Wimmera time and time again over the next forty years, sometimes as the backdrop for a dramatic encounter, at others as a subject in its own right. Irrigation Lake, Wimmera stands at a seminal moment in the career of one of Australia’s most loved and respected artists.