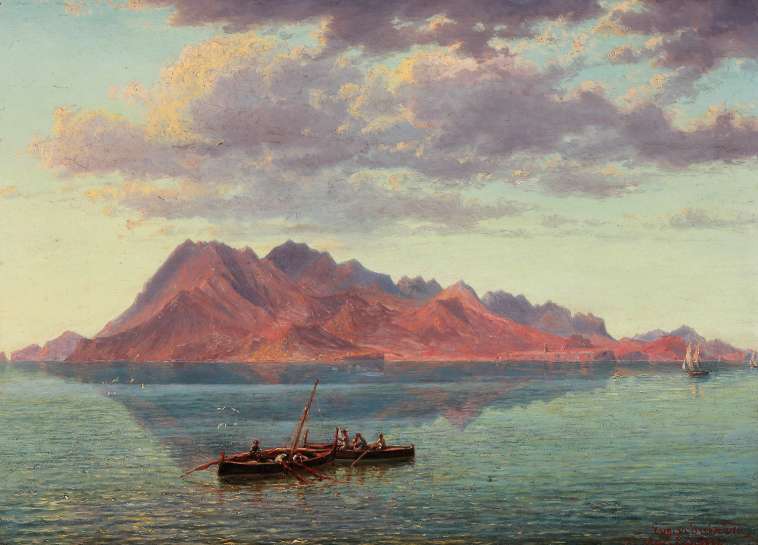 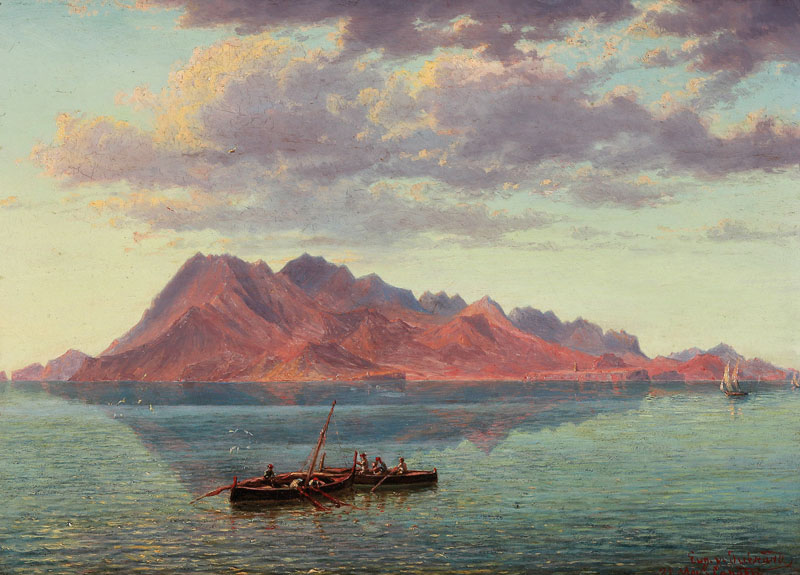 Although the many mountain ranges that you catch sight of here both on the African as well as on the Arabian side appeared almost universally bare, the imposing forms and colours with the variation of the lighting are indescribably beautiful. I could hardly tear myself away from the view.1

Not long before sunset on 31 January 1882, Eugene von Guérard saw, for the first time, the breath-taking forms and colours of the mountains of the Arabian (Yemeni) coast. From the deck of the R.M.S. Carthage, he watched, transfixed, as the Aden peninsula and then the Shamsan Range and its highest mountain, Jebel Shamsan, rose into view.  In an exquisite pencil drawing, he recorded the jagged silhouettes and the fall of light and shadow over the ridges of the multiple peaks of the peninsula that protects the harbour and port city of Aden. This was a part of the world that von Guérard had longed to see and, as the Carthage made its way along the Red Sea, he filled a further thirty-two pages of his sketchbook with rapidly executed drawings of the ‘indescribably beautiful’ mountains that line its coast.

On 4 January 1882, von Guérard, today recognized as one of the greatest landscape painters to have worked in Australia in the nineteenth century, his wife Louisa and their twenty-four year old daughter Victoria, sailed from Melbourne for Europe. After twenty-eight years, during which he became, arguably, the colony’s leading landscape painter, the inaugural curator of the National Gallery of Victoria (its de facto Director) and the first painting master of the Gallery School, it was time to return to Düsseldorf to be reunited with friends and family.

Jebel Shamsan, Aden was painted in von Guérard’s first floor studio at Glebe House, the Chelsea home of his daughter and her British husband, Reginald Blunt. The artist and Louisa

(until her death early in 1891) lived there from late 1890. As the present painting reveals, the intense colour and magical effects of the light on Jebel Shamsan at sunset still resonated in the artist’s memory. The work is informed by the sketchbook drawing, with its precise rendering of the complex geomorphology of the range (the panoramic proportions of the double-page drawing are masterfully compressed to fit the squarer format of the painting). Annotations of the drawing record colours, the stretches of sand on the shoreline and the height (1,776 feet) of Jebel Shamsan. Sketches of Arab dhows with their slanting triangular sails and extensively notated costume studies appear on other pages in this sketchbook.

Dated only ’31 Mai,’ Jebel Shamsan was almost certainly painted in 1891 or 1892, when it is known that the family was in London and von Guérard was actively painting. Perhaps the work was completed on that one day: the brushwork has the looseness and energy typically associated with the oil sketches that von Guérard painted directly from nature. The composition, however, is carefully considered. The angles of the lozenge-shape of the mountain and its reflected shadow echo throughout the composition –in the diagonals of boat masts, ridge-lines and steep peaks. The compositional geometry that underpins this work continues with the alignment of the fishing boat with the edge of the shadowed reflection and in the form of the cloud mass above. Sea birds circle, fishermen haul in their nets and double-masted dhows approach from the east: behind them the rocky forms of the volcanic Jebel Shamsan blaze with fiery colour.

ALL CURRENT & PAST CATALOGUE WORKS BY EUGENE VON GUERARD 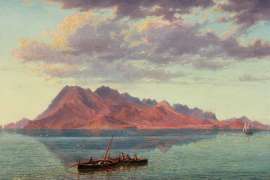 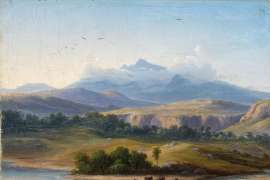 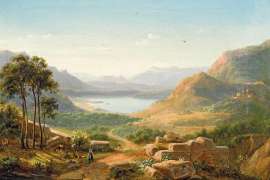 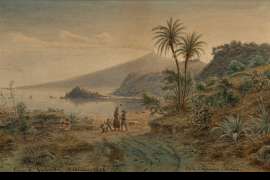