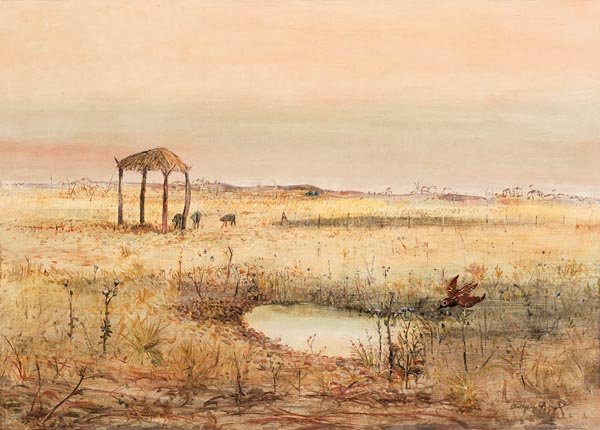 ‘Here art met nature – the ‘formula’, the vocabulary, fully fitted the ‘content’ of this dry, semi-arid sheep and wheat country, turning yellow and sun-parched in summer, with patches of burnt-off stubble or weed, the grass often eaten down to bareness where the stand of hard dry thistles acquires the accentuation of bushes. But this is habitable and inhabited country. Boyd never endows it with the drama of the desert. Even when painting its most parched and bare condition as in Wimmera Landscape, Sheep and Shed, Child in Dust Storm and in many other variations, he invariably includes some sign of life, human or animal: a ramshackle shed, scattered thin, dusty sheep, a hunter followed by his slow, thirsty dog, some distant houses or even only a bird, as in his Peninsula landscapes, rising or nesting.’1

Following an initial visit to Horsham, focal point in the vast Wimmera region of Western Victoria, during the summer of 1948-49 Arthur Boyd embarked upon a series of paintings which consummated his significant earlier achievements in capturing the essence of the Victorian landscape. Though Boyd continued to depict the Wimmera right up until the final decade of his life, it is his paintings of the region from the 1950s which are prized by collectors, feted by critics and have left an indelible impression on the public consciousness.

The present painting, which was repatriated from an English collection for sale at auction in 2002, depicts a wheat field in high summer and is at once stark and barren yet meditative and serene. This type of painting afforded Boyd a counterbalance to his Old Testament allegories of 1946, Bruegel-inspired landscapes such as Melbourne Burning and Moby Dick Hill and of course his Bride series of the latter-1950s.

‘When Arthur returns to plein-air landscapes, he refocuses. Telescopic visions disappear. There is no distortion, no veil of metaphor, no long looks back through time. Nightmares dissolve under brilliant light and, as claustrophobic crowds disperse and human activity lessens, the view widens.’2

Boyd’s early Wimmera paintings remain true to the plein-air tradition of the Heidelberg School, whilst referencing still earlier Australian landscape artists such as Louis Buvelot (1814-88), especially in the manner that the foreground  vegetation of the current painting is rendered.

‘…there is the thin veil of weeds and grasses, and scattered darker accents; the brushwork is of a wonderfully light and even deftness and density of touch (almost like that of a watercolour brush). The structural and tonal balance express a balance of mood. These tempera landscapes of ‘sparseness’ share with the early Peninsula landscapes a mood of calm acceptance: there is no challenge and thus no dramatic dialogue between man and nature; the figures are small, submerged, humble, but they are inhabitants, not ‘pioneers’.3

The change of pace permitted by the Wimmera paintings is reflected in Boyd’s technique. Earthily naturalistic and tonal colours, delicate handling of vegetation and subtly rendered skies are the hallmarks of the series. In the same way that our experience of the Wimmera paintings is conditioned by our knowledge of his allegories, we can conversely note that a complete appreciation of Boyd’s allegories is not possible without including the reflective moods, and the sensitive, delicate touch of works such as the present, major Wimmera painting, Landscape 1956-58. 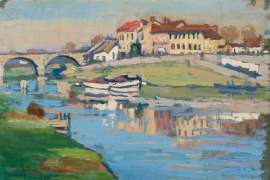 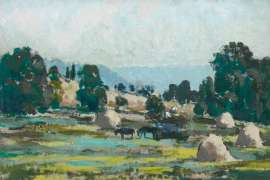 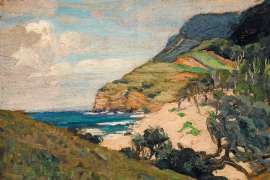 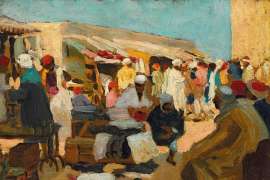