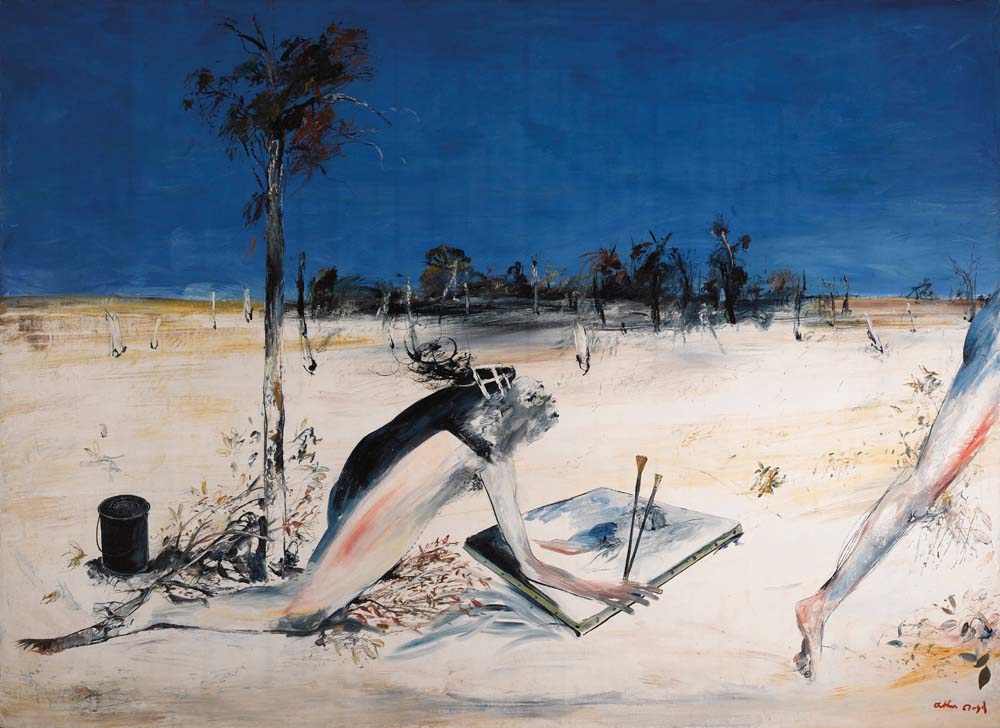 Kneeling Figure with Canvas and Black Can 1973, is the largest and one of the most powerful paintings that Arthur Boyd produced in England during 1972-73. Though painted at the Boyd’s rural property in Suffolk, England’s dappled light and heavy, moisture-laden skies are nowhere to be seen. The work is undeniably Australian and convincingly conveys Boyd’s connection to a more local terrain. Art historians have dubbed these works as part of the Caged Painter or Artist-in-Extremis series and they contain confrontational subject matter, expressive intensity and a sweeping depth of emotion.

The Australian bush often serves as a stage setting or backdrop for Boyd’s fertile imagination and the expression of sometimes disturbing though usually very complex ideas. The inspiration for Kneeling Figure with Canvas and Black Can can be directly traced to a five-month residency undertaken by the Boyds at the Australian National University, Canberra, in late 1971 and early 1972. Boyd recalled that from his apartment in the outer suburb of Garran he ‘could walk into the country in five minutes. It was quite marvellous: there was this undulating, rolling quality. And the weather – the blueness of the sky … the blue is so intense compared to the Victorian [light].’1 In the painting, the sky, blonde foreground, deeply-etched shadows and straggly gum trees convey this affinity with an Australian bush scene.

Boyd reacquainted himself with the landscape after a decade spent abroad and began to recall previous places he had visited. He reconsidered motifs and themes that stretch back in his art to the 1940s, including the reappearance of the 1940s Piero di Cosimo-inspired dog and the figure of a man with foliage sprouting from his body.

Just as he was inspired by the Canberra landscape, the return of such images have their roots in Arthur and Yvonne Boyd’s 1971 Australian visit. Boyd brought with him a container of paintings that he intended to show at a retrospective exhibition planned for the Australian National University. These included examples of the Nebuchadnezzar series as well as a series of works that he had produced in response to the death of his father, Merric. Relooking at both sets of paintings inspired Boyd to think about his own situation as an artist and ruminate on the direction of painting.

By referencing the Potter series (1968-69), Boyd drew attention to the economic disparity that separated himself from his artist-father. Just as Arthur painted Merric Boyd being followed everywhere by a dark cloud of depression, Boyd introduced the family dog, Peter, into the new works, as a sign of the burden he now carried and the guilt he sometimes felt as a commercially successful artist.

Similarly, the Nebuchadnezzar paintings that Boyd produced in the mid-1960s were also given a contemporary twist. These works registered the artist’s impassioned response to the bestiality of humankind in the context of the Vietnam War. An Old Testament king is mercilessly punished for his sins. In Kneeling Figure with Canvas and Black Can it is the artist who is cast into the wilderness. His paintbrushes are pointed away from the canvas and he is burdened down by the weight of the dog that mounts him from behind. There is the suggestion that the act of making art, and by extension the insatiable demands of the art market, involves less pleasure and more pain.

Boyd was certainly feeling the responsibility of being a provider and the pressure of the high expectations placed on successful artists. It is also known that he was sensitive to contemporary debates concerning the continuing relevance of painting and what National Gallery of Australia curator Deborah Hart has termed ‘the traditions of landscape in art’.2 As she notes, the once burning issue of whether landscape painters could help define national identity was being usurped in the early 1970s by the more pressing issues of environmental management and Aboriginal land rights, as well as the mining, export and use of uranium.

Arthur and Yvonne Boyd returned to England from Australia in good spirits, with the latter sensing that Arthur was ‘poised for a breakthrough in his art’. Arthur Boyd also had an inclination of changes afoot and recorded in an interview that while he got a lot out of his time spent in Australia it had ‘been rather unsettling’. ‘You become attached’, he went on, ‘or worn in a groove. You don’t mean to break out, but when you do it can be unsettling to an advantage or it can have a bad effect. In this case I hope it has been a great advantage’.3

The most palpable change in Boyd’s work at this time was the replacement of his idea for a series based on Impressionist Édouard Manet’s (1832-83) painting Dejeuner sur l'Herbe (Luncheon on the Grass) 1863, to depictions of a single figure engaged in mental turmoil and physical struggle. In Chained Figure and Bent Tree, also painted in 1973, the head of the artist is caged and chained to a tree. The restrained figure stretches forward in a supreme effort to continue to paint but the canvas has been cruelly taken away. The artist is shown in a fit of madness, struggling to release himself from an inner torment.

Both the familiar tin can and the canvas reappear in Kneeling Figure with Canvas and Black Can, as well as in the smaller version that was gifted by Boyd to the NGA in 1975. Art historian Mary Eagle has written perceptively about the connections between these works, identifying the tin can, Boyd’s billy for making tea, as part of a more general critique of the ‘potboiler’ – the undeserving picture that receives commercial success. She also identified the delicately painted pink, blue and white central figure in Kneeling Figure with Canvas and Black Can as the artist and as one of his famous Brides. The painting is tantalisingly double-edged: it alludes to the artist weighed down by the muzzled dog on his back and Boyd’s 1950s shearer that pins down a white bride.

Arthur Boyd once remarked ‘I put myself in the cage ... instead of talking, I had my paintbrushes’.4 This statement is a key to decoding the anguish he sometimes felt about his personal circumstances, the art market and the way of the world. Pictorially inventive and highly individual works from the Caged Artist series channelled Boyd’s deep-felt concerns. England provided a distance from Boyd’s artistic roots and afforded him the opportunity to ponder on his life. The figure making a hasty exit to the right of Kneeling Figure with Canvas and Black Can could well be a metaphor for the artist. Is it Boyd taking flight or the subject of the picture in an oblique response to contemporary debates concerning the supposed death of painting? 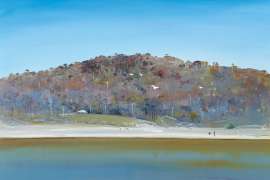 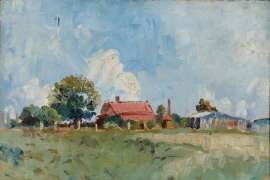 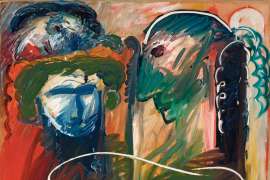 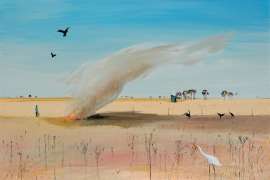