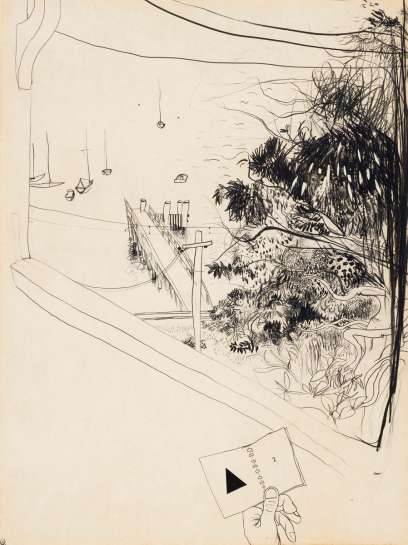 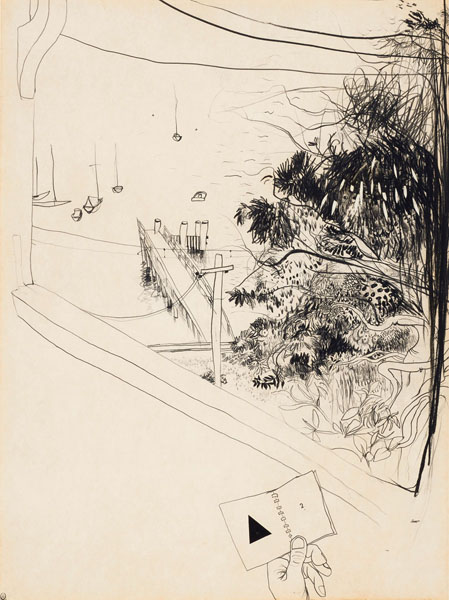 Brett Whiteley wasn’t supposed to be back so soon. He had left home in 1960, destined for Europe, hungry for art, culture, experience. In Paris, from ‘Modigliani’s country’, he said he wanted to sit alone to see how ‘environment can mould, shape or even stain the personality of a genius.’1

These thoughts stayed with him through the decade as he travelled to London, then New York, then Fiji. He had enjoyed success in London, but America proved difficult. Fiji was a fresh start. Whiteley’s plan had been to settle there with his wife, Wendy, and their daughter Arkie. But a scrap with police over a small amount of opium led to an order to leave. And so in November 1969, the Orcades pulled into Sydney Harbour with Brett, Wendy and Arkie on board.

He was curious about the path ahead: ‘What will Australia, my breeding ground, my stupidity, my cradle give me?’

If Brett and Wendy had any reservations about staying, the discovery of a property on the lower north shore of town, a site that looked over the water and the city and Luna Park and the construction site that would soon become the Opera House, reminded them with a blast of the quicksilver beauty that was Sydney itself.

Lavender Bay was a bounteous, voluminous gift. Brett plunged into work, transforming the scene around him into a series of pictures that would secure his reputation beyond his death. He later explained the need to return to a single frame of reference:

If you want to be an artist, you go to an art-supply house and get some ink and some paper and pens and a calligraphy brush and charcoal and aim at virtually whatever is front of you. The subject matter is not that important. And then try and cheat and deceive and lie and exaggerate and most particularly distort as absolutely as extremely as you can. And after some six months or a year or usually in a state of intense frustration you will see something that you truly have never seen before.2

This drawing, Lavender Bay 2, is one of the earliest from the series. It dates to 1973, when the Whiteleys were renting upstairs at 1 Walker Street. It wasn’t until the following year that they bought the entire house — for $50,000, in fact — and then Brett set about transforming their surroundings into art.

Lavender Bay 2 looks out the window, through trees and power lines, to the wharf, which beckons to boats moored in the bay. A thick tangle of branches and leaves on the right accentuates the open space and light that floods the rest of the picture. Brett needs only a few lines to capture the movement and rhythms of the harbour outside his home: ‘The purpose of drawing is to make freshness permanent—to trigger astonishment.’3

At the bottom of the picture, his left hand holds a notebook, a hint of flourishes to come, including Self-Portrait in the Studio in 1976, where his hands hold a mirror and a brush. But what to make of that shape in his notebook? A symbol from Alcoholics Anonymous, the legacies of recovery, unity and service? Brett dealt with addiction often in his art; he mentioned the fellowship, too, such as in Sydney Harbour to the Spirit of Bill W 1987, referring to the founder of AA.4 This drawing coincides roughly with the start of a dependency that would isolate the Whiteleys inside Lavender Bay, even if their struggles to break free were still to come.

But it could just be a triangle, three sharp lines in a picture full of curves. There are no straight lines in nature, Brett once said. He had analysed his own body and was unable to find a single one: ‘Eventually I became so allergic to geometry or anything disciplined of the ninety degree, that when buying milk I reached instinctially [sic] for the bottle rather than the cardboard box.’

Ashleigh Wilson is the author of Brett Whiteley: Art, Life and the Other Thing. 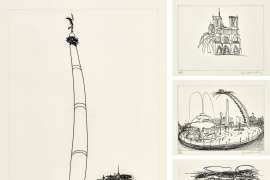 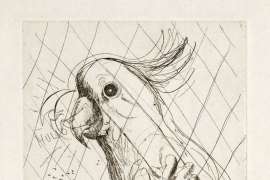 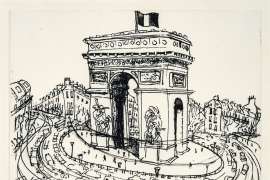 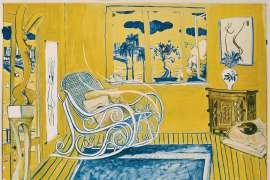