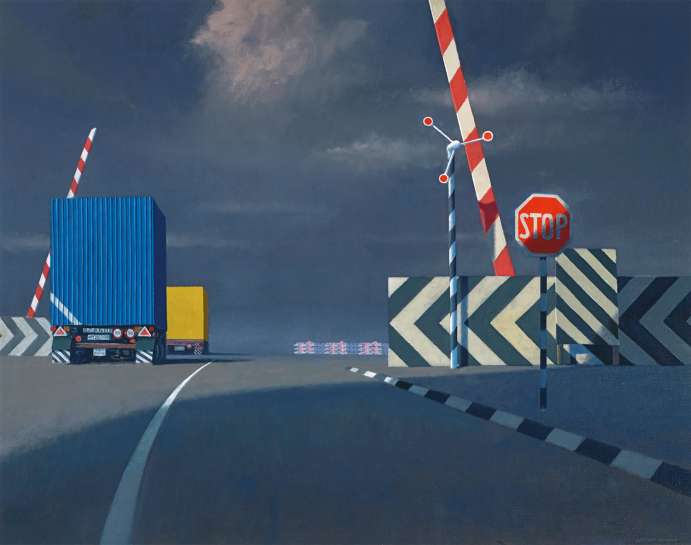 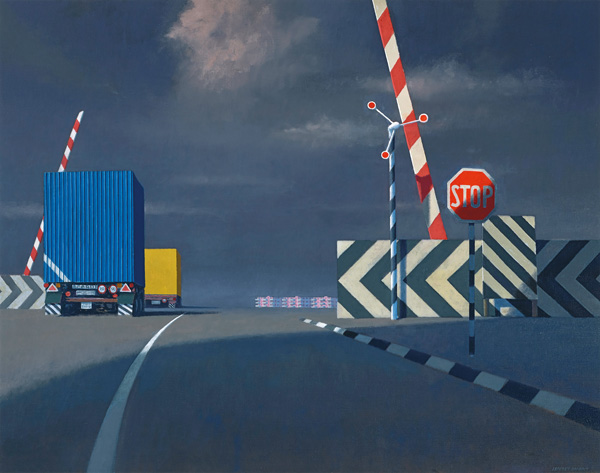 Like Giorgio Morandi (1890-1964), who made an epic body of work from a collection of dun-coloured jugs, bottles and vases, Jeffrey Smart returned, repeatedly, to his own familiar set of motifs. Level Crossing is a relatively late painting that acts as kind of anthology – a retrospective – of favourite themes.

Here are the trucks from paintings such as Truck and Trailer Approaching a City 1973; the truck and gently rising road from works such as The Guiding Spheres II (Homage to Cézanne) 1979; the road with a curving white line and a glimpse of apartment blocks in the distance, from Approach to a City III 1968. The dynamic black-and-white traffic signs may be found in a work such as Near Pisa 1995 and many others. The crowning touch is the red-and-white striped arm of the toll gate lifted towards the sky. Here, one thinks of The Dome 1977, with its vision of St. Peters looming behind a grassy field, offset by a single red-and-white pole set at an oblique angle.

The power of the images lies in Smart’s skillful arrangement of these visual elements. Imagine the painting as a drawing in which each line is extended across the breadth of the picture plane. One would be left with a series of vertical and horizontal intervals, transected by a few severe diagonals. Smart explored the composition in numerous small studies before committing the final form to canvas.

Although we tend to read any painting devoid of a human presence as ‘empty,’ or even ‘lonely,’ Level Crossing is a complex, busy work that repays the closest attention. Look, for instance, at the triangle that intrudes from bottom right, where the bollard on the ground intersects with the traffic signs. This large triangle echoes the arrows on the signs, and even a small triangle affixed to the blue truck.

The dominant blue-grey tonality of road and sky frames the bold simplicity of a colour scheme that uses the simple contrast of black-and-white, and the three primaries: blue, yellow, and red.

Nothing in this scene is natural. There are no trees or grass – the ground is pure asphalt. Even the skies have a dark, polluted appearance, as if filled with the smoke of factories. A three-pronged stand with a red reflector light on each arm is a robotic parody of a tree. It may sound grim and ugly, but this is not the case.

Smart consistently denied that his paintings were studies in alienation, seeing this idea as an unfortunate hangover from the Existentialist and Marxist critiques so prevalent in the 1950s and 60s. His work does not document humanity’s estrangement from nature or the impoverished, utilitarian nature of post-war architecture. As there is no definitive, ‘correct’ reading of any painting it is perfectly possible to view the work in this manner, but we would be veering far from the painter’s intentions.

It is more likely Smart wished to capture an epiphany – a moment of fleeting beauty – as we move out of the deepest shadow into the sunlight, encountering the dazzling black-and-white arrows, the brightly coloured trucks and stop sign. It is a moment of enlightenment, as we are struck by the brilliance of these ordinary things.

If this were a still from a movie it would be a shot taken through the windscreen of a car in which we are following the trucks down the highway; or viewing them from the other side of the road, through a rear window or in a mirror. We may be driving into the shadows, casting a final glance at the city we are leaving.

Such ambiguities are found everywhere in Smart’s paintings. He was fond of fractured narratives that invite us to provide our own scenarios. If we wish to see Level Crossing as a stage set on which something dramatic or mysterious is about to happen, Smart would not have discouraged us, but it would be closer to his own thinking if we considered the picture in purely aesthetic terms, as if it were a geometrical abstraction.

The paradox Smart embraces is to think abstractly in a completely figurative painting in which texture or the expressive quality of the brushwork plays little role. Smart’s paint is applied with such fastidious care that his works display a near-photographic realism, but his motifs must not be interpreted as symbols or visual metaphors. These works may be best described as ‘metaphysical’ – a method of depiction that invites us to look beyond physical appearances. We may gaze at a truck not simply as a hulking, noisy vehicle, but as a geometric form, a solid block of colour superimposed on the grey of the road. The painting isolates aspects of the truck that are rarely considered in everyday life.

In Level Crossing, Smart asks us to bring the same level of attention to bear on every part of the painting, accepting that each component contributes to an ideal equilibrium. It’s not possible to do this with the sensory world, which is perpetually in motion, but within the picture every piece remains equally still, and equally important. Smart admired this quality of ‘stillness’ in the work of Piero della Francesca who – worse luck for him – never had the opportunity to paint beautiful trucks or traffic signs. 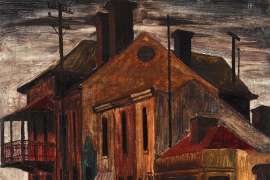 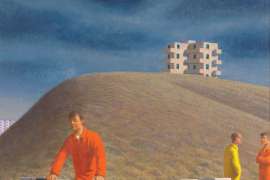 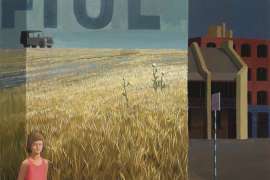 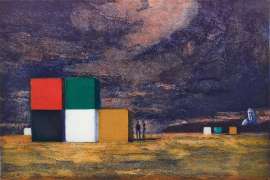