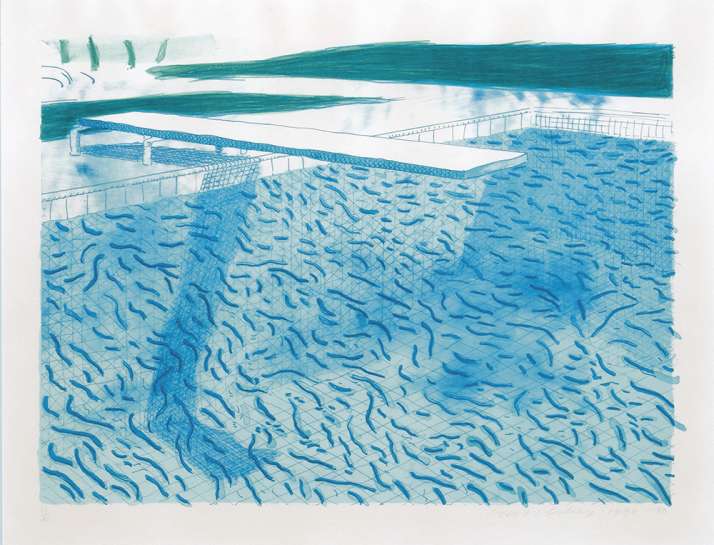 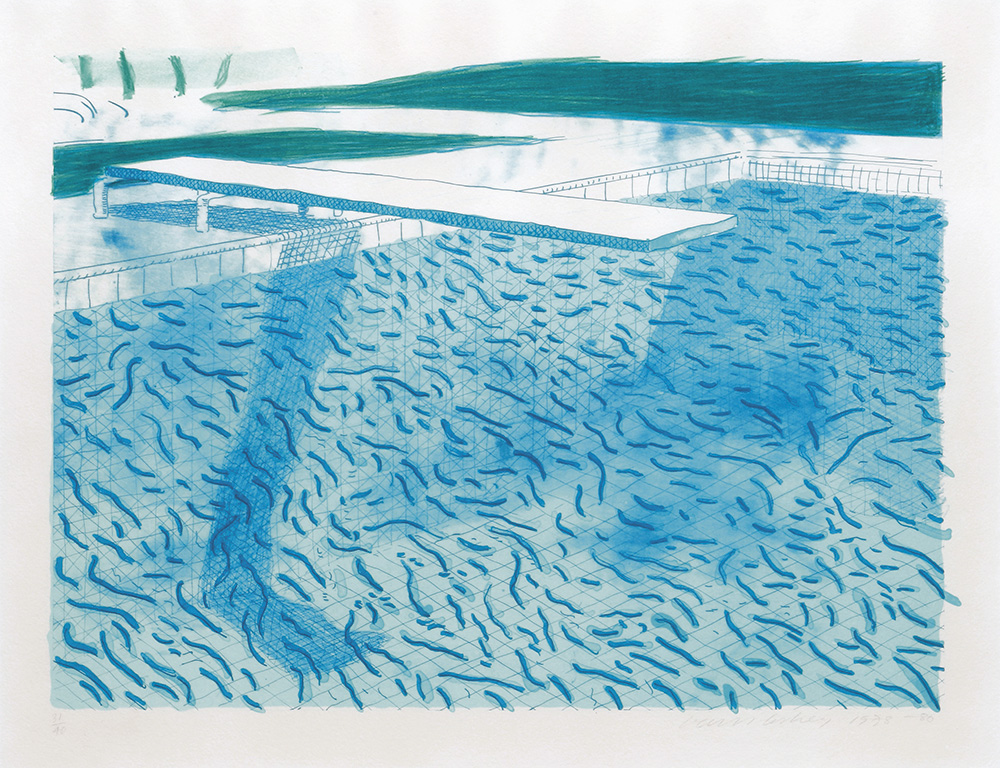 By BRETT BALLARD
Lot:
Lithograph of Water Made of Thick and Thin Lines and Two Light Blue Washes

David Hockney arrived in Los Angeles in 1963 to find a city that was vast and fast-moving. Against the advice of others, who insisted East not West, Hockney found a world of light and architecture, its newness marked by freeways and its setting edged by water. Amidst its people and pools Hockney quickly gained an artistic footing and a liberation to paint this bright new world.

Hockney was ‘thrilled but frightened’ but with lodging, car and studio secured, Hockney began a series of paintings that would foreground the paintings and prints of the seventies. California Art Collector 1964 (private collection) was painted by Hockney after visiting a collector with John Kasmin, his dealer. Hockney painted his subject in the garden, with her collection and to provide context, he included a swimming pool. ‘The picture is a complete invention. The only specific thing is the swimming pool, painted from an advertisement for swimming pools in the Sunday edition of the Los Angeles Times.’1

The swimming pool became the recurrent motif of the early iconic pictures, Peter Getting out of Nick's Pool 1966 (Walker Art Gallery, Liverpool) and A Bigger Splash 1967 (Tate Britain, London). Most recently, the sale of Hockney’s Portrait of an Artist – (Pool with Two Figures) 1972, realised US $90,312,500 at auction in 2018. It is a painting from the incidental pairing of two photographs: one, a figure underwater, and the other, a figure looking at something on the ground. Hockney reworked the painting several times. In the South of France, Hockney asked his team to model a variety of poses, but the finished subject of Hockney’s Portrait of an Artist is Peter Schlesinger, from an image taken on a balcony in Morocco.

In 1978 Hockney was encouraged by Kenneth Tyler of Tyler Graphics to produce and paint on handmade paper. At first, Hockney painted flowers, but pools became the more interesting subject for the artist. Often taken from SX-70 Polaroids, the images became large painted sheets gridded together to become final works. Hockney returned to his central theme, water: ‘I had become more interested in the more general problem of painting the water, finding a way to do it. It is an interesting formal problem, really, apart from its subject matter; it is a formal problem to represent water, to describe water, because it can be anything – it can be any colour, it’s movable, it has no set visual description.’2

Hockney and Tyler’s experiment with paper pulp took Hockney beyond paper paintings into lithographs that would become Pool Made with Paper and Blue Ink for Book 1980, a lithograph editioned to accompany a book (sold Menzies, Sydney, 23 September 2021 for $73,636 including buyer’s premium) and our present lot Lithograph of Water Made of Thick and Thin Lines and Two Light Blue Washes 1978-80.

The image of the pool, and the myriad reflections within, are the language of Lithograph of Water Made of Thick and Thin Lines and Two Light Blue Washes. The polaroids and the colour washes of Hockney’s paper paintings are reference points for Hockney. The lithograph takes shape as Hockney combines marking with colour to bring the image to life. There are blues and blue greens. Hockney plays surface against depth and light against dark, and above, the diving board gives the image pause.

Museum of Contemporary Art Tokyo, no.207
Tyler Graphics, no.250

ALL CURRENT & PAST CATALOGUE WORKS BY DAVID HOCKNEY 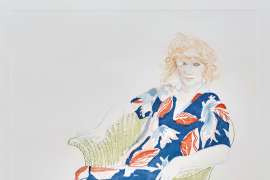 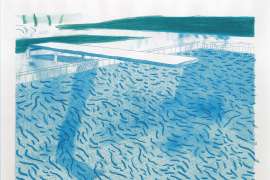 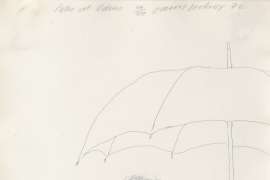 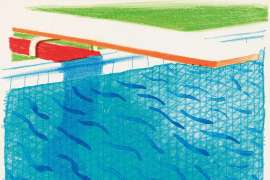