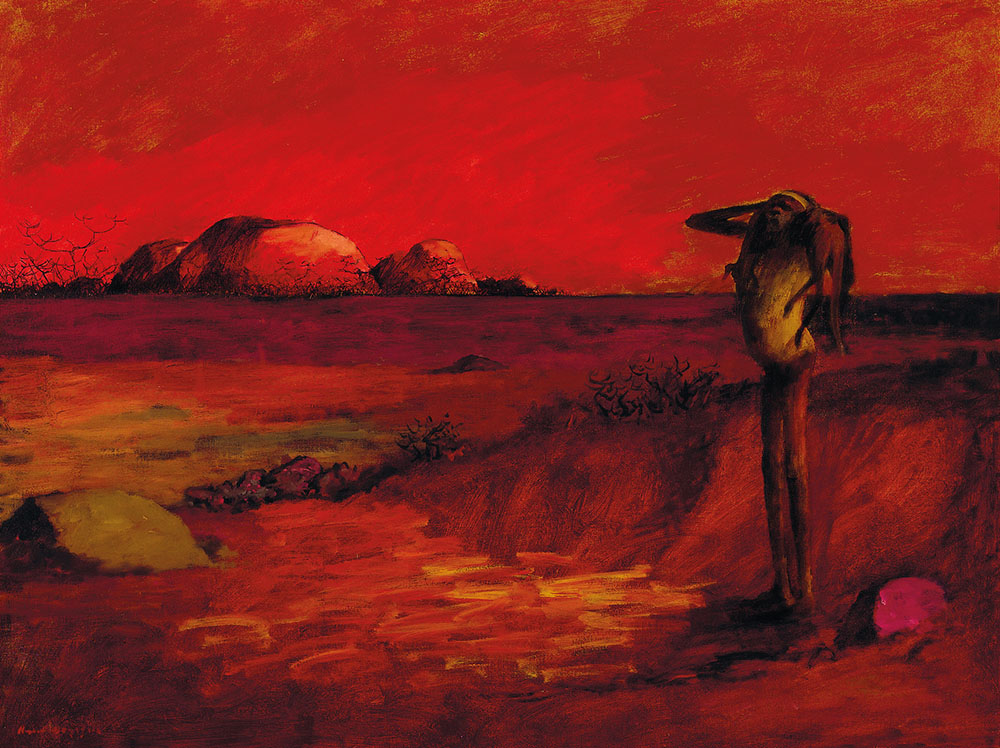 By Ken Wach
Lot:
This lot has been withdrawn

Russell Drysdale was an unusually significant artist. He not only changed how we see and perceive Australia’s rural interior landscapes, but also lived long enough to see his artistic themes and broad humanist convictions adopted by a later generation of artists and accepted by the Australian population at large. As is so often the case in history, it is the visionary artist who, untrammelled by aesthetic convention and artistic precedence, instigates cultural change and enlarges perceptual horizons. As a consequence, Drysdale’s singular paintings, known for their rarity, are among the most sought after in the country.

George Russell Drysdale was knighted in 1969 for his contribution to Australian art and his reputation has been firmly sealed into Australia’s artistic heritage. Lord Kenneth Clark, the youngest ever Director (at thirty years of age) of London’s National Gallery, former Surveyor of the King’s Pictures and the Professor of Fine Art at Oxford University had the following pertinent words to say about Drysdale’s artistic merits:

Drysdale is the essential Australian painter. Many gifted painters have come out of Australia and one of them, Sidney Nolan, is a universal figure. But no one except Drysdale gives the same authentic feeling of the resolute humanity that has managed to exist in that terrible continent. Those who love Australia and the Australians as I do will find their feelings reflected in the bold, sincere and deeply human records he has made of the landscape and its inhabitants, black and white. To anyone who cannot visit Australia I would say look at the paintings of Drysdale and you will understand why so many unexpected people admire Australia.1

Clark’s flattering and accurate remarks certainly underscore our initial observations. However, they are re-doubled when viewing Drysdale’s actual paintings. These amply display visual attributes that make his contributions all the more obvious. In 1997, the National Gallery of Victoria mounted a touring exhibition of seventy-seven paintings by Drysdale entitled Russell Drysdale 1912-1981, which were expertly selected by Geoffrey Smith, the Gallery’s then Curator of Twentieth Century Australian Art. The exhibition presented the first opportunity that the Australian public had in thirty-seven years to evaluate the full scale of Drysdale’s paintings. The previous opportunity was a Drysdale retrospective at Sydney’s Art Gallery of New South Wales in 1960. Significantly, it was the first Drysdale retrospective exhibition ever seen in Melbourne. What was presented in the Melbourne retrospective were brooding, even tenebrous, paintings that are quite different from the majestic vistas of Sir Arthur Streeton or the pastoral idylls of Frederick McCubbin. Drysdale’s landscapes with their wasted trees, low horizon lines, scenes of desolation, arrangements of inhuman forms, upturned tree stumps and their wistful qualities are at the opposite end of the clear autumnal calm of a Streeton or McCubbin canvas. Drysdale was obviously a very different sort of artist, with a very different point of view.

It was a point of view that was substantially formed during his travels through Australia’s vast inland. On 18 May 1956, Drysdale and his wife Bon and their sixteen year-old son Tim set out on a six-month journey in a specially fitted-out Dodge station wagon. This was Drysdale’s first excursion into Australia’s inland and it was to make a profound impact upon his artistic direction and aesthetic aims. Certainly, he had been into North Queensland to attend monthly business meetings for Pioneer Sugar Mills, the family company of which he was a director, but he had never crossed west into Australia’s heartland. The trip eventually passed through Townsville, Cairns, the Barkly Tablelands, Mt. Isa, Tennant Creek, Alice Springs, the Musgrave Ranges, Ayers Rock, the Olgas and then headed north to Darwin. After a stay of three weeks in Darwin, Drysdale set out through the Kimberleys to Broome, Carnarvon, Perth, Kalgoorie, across the Nullarbor to Port Augusta and the Flinders Ranges to Adelaide before returning to Sydney. The trip covered over 22,000 kilometres and went through country rarely seen by most of Australia’s city dwellers, who were then diverted by preparations for Australia’s first Olympic Games in Melbourne. Drysdale took many notes and photographs, kept a diary and completed many sketches. In 1958, the year of the present painting, Drysdale returned to the Central Desert region of Australia and the Kimberley on an expedition with the ornithologist Dr. Dom Serventy and Professor A. J. (Jock) Marshall -both of whom were committed ‘Austrophiles’. The point of all these details is to show that Drysdale was unusually well informed. Drysdale’s attitude to Australian Aborigines, shaped by travel and guided by excellent company, was remarkably benevolent and respectful and he remained impressed with how well they fitted into and survived their environments. He admired their resourcefulness and their stately manner. In his mind’s eye, the Aborigine seemed to embody the essence of Australia.

Viewed in such a context, there is little doubt that Drysdale had a very sympathetic understanding of Aborigines’ relationship to the Australian landscape and their adaptation to local climatic conditions and forbidding environments. He was also aware of what White Settlement had done to their ancient traditions and mores. It is safe to say that Drysdale revived an interest in the depiction of Aborigines and changed the way they were perceived in art. For example, in the Nineteenth Century Aborigines were in the main portrayed as being quaint and even comical. In the Eighteenth Century they were depicted as unfettered ‘Noble Savages’–a then common phrase that originated with the English poet and dramatist John Dryden in his book, The Conquest of Granada, of 1672 and was later popularised as an anthropological concept by the French philosopher Jean-Jacques Rousseau in his famous publication, The Social Contract, of 1762. As Professor Bernard Smith, Australia’s most respected art historian, has remarked on many occasions, the sad historical passage ran ‘from the Noble Savage to the ignoble savage’. Drysdale stood at neither of these two disparate poles and one can sense how empathetic he was in his paintings of the pivotal period between mid-1956 and late-1958.

All these social elements and aesthetic associations converge in the present painting, Drysdale’s important canvas, Red Landscape, of 1958. The most observable thing to note in this impressive painting is how closely the foreground male figure is linked to his surroundings. The Aborigine, with a dead wallaby on his right shoulder, on the far right of the canvas is rendered in such a way that merges the painting’s individual elements so that his figure and the earth seem to co-mingle. The effect of visual unification is made all the more obvious with the splashes of red and ochre pigments on the figure’s lower body that mimic the colours of the earth around it, shining with the fierce unpolarised glow of an Outback sunset. The dizzying vastness and desolate solitude of the environment is heightened by the complete lack of internal framing devices (trees, branches, grass and the like) that might draw the viewer’s eyes inwards. As a result, the painting presents itself as a horizontal vignette which displays only a small part of the vast visual expanse. The figure’s white shirt and headband faintly hint at the incremental incursions of White Settlement and its sadder dimensions. Drysdale’s eyesight was monocular and he always had trouble rendering perspective and visual depth. Here, this is overcome by suggesting pictorial depth through the slant of the mid-ground mound immediately behind the figure. Likewise, the low horizon line and its outcrop of mountainous rocks of indeterminate size suggest receding distance. Feelings of awe and wonder flood the painting. Drysdale was fully cognizant of these effects and in his essay ‘Capricornia’, which accompanied the 1958 London exhibition in which the present painting was originally shown, he cogently adds the following lucid insights:

This is a land, mysterious and unknown until the last century, that held within itself curious forms of life, that in the rest of the world had passed into the remote darkness of time. There are still men of stone-age culture living a forgotten pattern of life. Nomads of the desert, roaming as their ancestors roamed in the dawn of history. In rock and range and river is the meaning of their life and the rhythm of their way.2

These words reveal that Drysdale’s aesthetic aim is to create a pictorial analogy of timeless ecological harmonies. As such, his paintings uncover aspects of a largely hidden Australia. It is clear that Drysdale’s paintings are based upon the associations contained in his mental compendium and do not derive from any simple recording of a particular scene.

Drysdale’s masterly painting, Red Landscape, of 1958 was illustrated in the catalogue of his second solo exhibition in London; it was exhibited in his first retrospective in 1960 and it has a long and clear provenance. This historically and aesthetically important painting shows the then forty-six year-old Drysdale at his mature best, displaying all the artistic hallmarks that justifiably made him so admired and famous.

I wish to acknowledge the help of Peter Nahum, the Director of London’s Leicester Galleries, with the primary source research for this essay.

This lot has been withdrawn