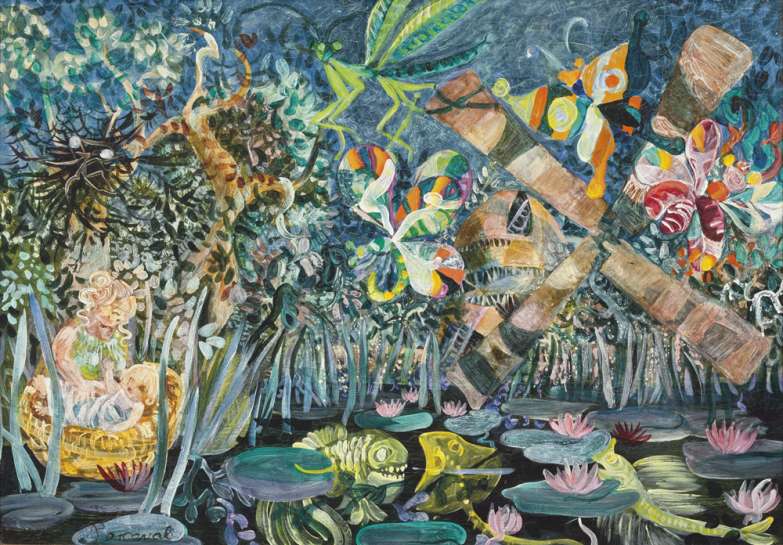 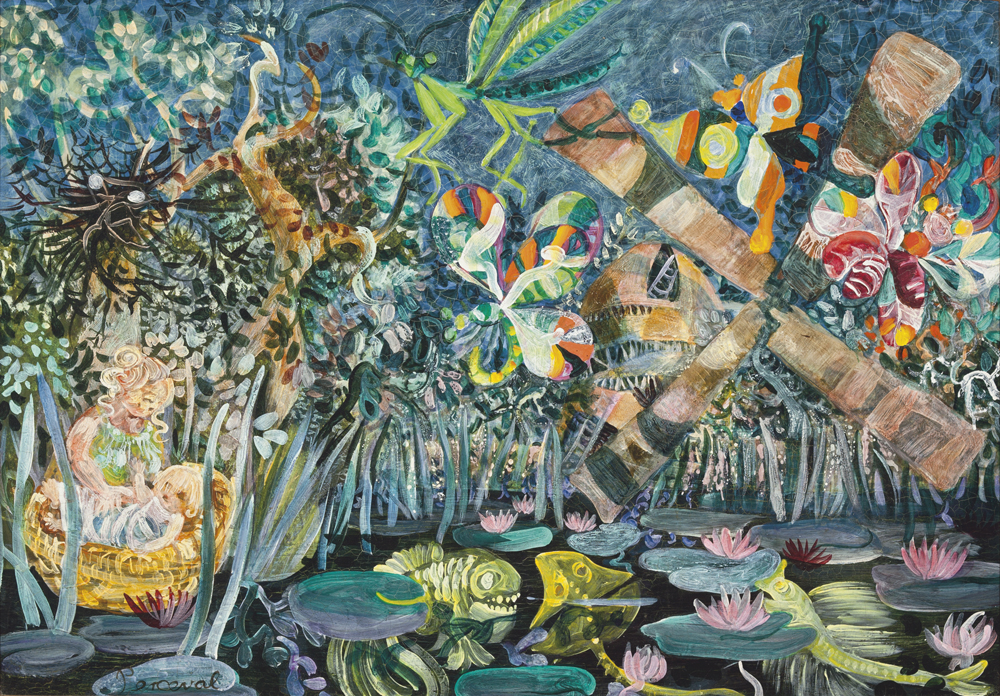 By Tim Abdallah, Head of Art
Lot:
Moses and the Insects

My garden holds me like its private dream
A secret pleasure, guarded and apart.
Now as I lean above the pool I seem
The image of my image in its heart.
In that inverted world a scarlet fish
Drifts through the trees and swims into the sky,
So in the contemplative mind a wish
Drifts through its mirror of eternity.1

In 1965 John Perceval was the first artist to receive a Creative Arts Fellowship to the Australian National University in Canberra. The time in Canberra brought him into contact with A.D. Hope, English Professor and the author of the poem The Double Looking Glass 2, which became one of the main sources of inspiration for his rendering of the Biblical story of the Finding of Moses.

The story is well known: the Pharaoh had decreed that all Hebrew baby boys be put to death, and Moses’ mother, fearing her baby would become a victim hid the infant in a tar-lined basket amongst the Nile bulrushes, where it was chanced upon by one of the Pharaoh’s daughters. The child was adopted and raised in the Pharaoh’s household.

In fact the reference is an oblique one: Hope’s poem makes particular reference to a painting by Tintoretto, Susanna and the Elders, and doubtless it was Perceval’s established interest in the Italian Renaissance painter, combined with the poem’s aquatic theme, which was the actual inspiration for the paintings. He painted several versions in the late 1960s and would intermittently return to it on several later occasions as well.

Moses and the Insects brings together a number of Perceval’s pre-occupations. The pool, as a concept conveys an enclosed, self-contained, complete world. Its an upside down world as well (a double looking-glass), parallel to our own, but different. In Perceval’s depiction, the water’s surface barely registers on the eye and the division between life below and above the surface has disappeared.

Water is one of Perceval’s favourite themes. Fluid reflections, depths, splashes, bubbles and waves animate much of his best work, in particular his famous Williamstown paintings. The myriad textures of the port are, in this case, represented by the abundance of plants, insects, fish, flowers and birds. Perceval’s unique ability as an artist lies in the way he tirelessly enriches and enlivens a scene. There is always so much going on, and characteristically his best paintings are a balancing act between chaos and control.

While the finding of Moses scene is clearly depicted in the lower left corner of the composition, it comes across as an everyday occurrence, and hardly the momentous Biblical event known to us all. It is completely consistent with Perceval’s technique that the two figures who ought to be the centre of the composition occupy an equivalent visual space as the windmilling fluttering of a dragonfly’s wings at the opposite side of the composition. Like his heroes Heironymus Bosch (c1450-1615) and Pieter Bruegel (1525-1569), Perceval likes to depict the subject, the painting’s ostensible reason, as a marginal event in a busy world where everything has a right to an existence and a right to our attention. Man is just a part of the world, not its centre. 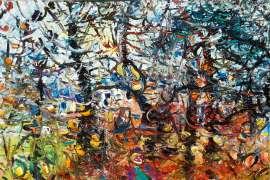 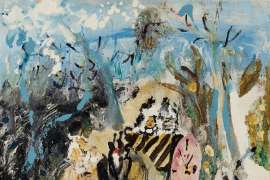 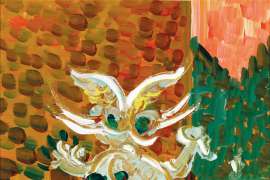 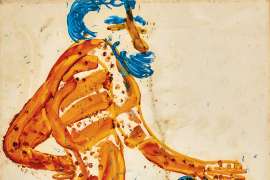