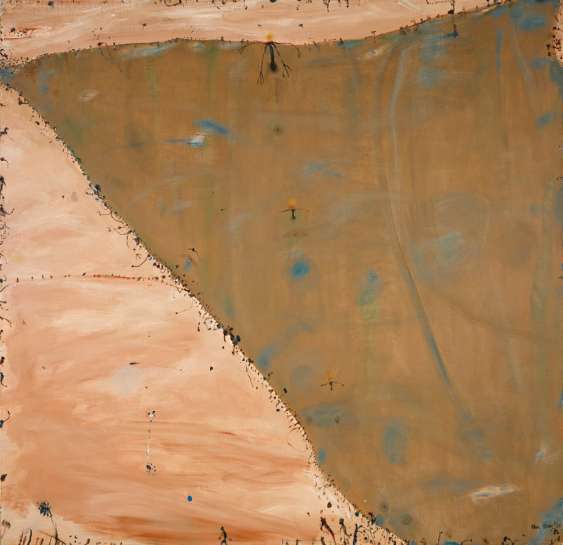 John Olsen is renowned for his bold, captivating and deeply subjective art, especially its persistent engagement with the Australian landscape throughout a career spanning over sixty years. Painted between 1980 and 1982, the year it was a finalist in The Wynne Prize, Murray Flowing into Lake Alexandrina demonstrates the way that Olsen immerses himself in the places that he visits, offering an evocative study of the South Australian coastline.

In this painting, the triangular thrust of the lake cuts into the earth, pulling the eye across the work. Though the space is flattened, the textured brushwork and layering of the earthy tones add depth to the canvas. The subdued palette of greys and fawns reflects Olsen’s lyrical description of ‘Lake Alexandrina whipped up like café latte, shallow and extremely dangerous. Huge skies with black menacing clouds emphasised by the flatness of the landscape.’1 This painting reflects the ‘richness of emptiness’ that Olsen discovered here in the Coorong, which he called ‘a soul place… that is silent and uniquely itself’.2 He frequently seeks out this emptiness, this expansive void, in his journeys through the Australian landscape.

Olsen regularly illustrates bodies of water in his art – from the sparkling Sydney Harbour and the typically dry basin of Lake Eyre, to the long stretches of the Murray, Yarra and Darling rivers. Murray Flowing into Lake Alexandrina is an example of Olsen’s exploration of the relationship between land and water, and the liminal space that emerges in-between the two. These elements are divided by the distinct line of the shore, a sinuous edge that is a pulsing, flickering force. Animated by the black dabs and flecks, it suggests the life that might lurk beneath the murky surface. However, there is no sign of the world ‘teeming with life’ – like his lively images of pelicans, frogs and insects – that Olsen discovered in these wetlands.

Lake Alexandrina is in the Coorong National Park in South Australia, south-east of Adelaide. In 1971, Olsen visited the region as part of the crew for the ABC documentary series Wild Australia, making sketches as they travelled to feature in the show. The episode ‘Beyond the Dunes’ was filmed here, and one of his works he produced, The Coorong 1971, was presented to Queen Elizabeth in London in 1972. Olsen said of his experience with Wild Australia that ‘I enjoyed it tremendously. It was the greatest privilege. Working with wildlife experts is amazing. I learned a lot. It opened my eyes. They walk into strange territory and can read it like the palm of their hand.’3

Olsen returned to the region several times, including between 1980 and 1982 when Murray Flowing into Lake Alexandrina was created. This was a period of immense change in Olsen’s personal and professional life. In 1980, Olsen left his family and their property in Dural, north-west of Sydney, moving to the regional town of Wagga Wagga to be with his new partner, the artist Noela Hjorth. The following year the couple moved to Clarendon in South Australia, only a short journey to Lake Alexandrina.

Olsen is one of Australia’s most celebrated living artists. He won the Wynne Prize in 1969 and 1985, the Sulman Prize in 1989 and the Archibald Prize in 2005. Olsen was awarded an Order of the British Empire in 1977 and an Order of Australia in 2001, as well as honorary doctorates from the University of New South Wales in 2003 and the University of Newcastle in 2011. His work is represented in both Australian and international institutions, as well as many significant private collections. 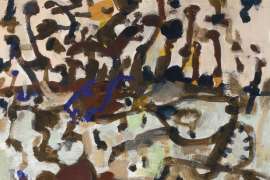 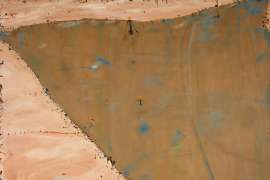 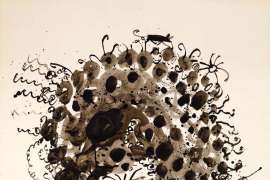 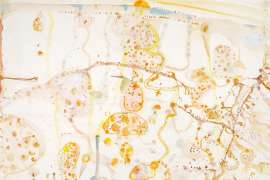