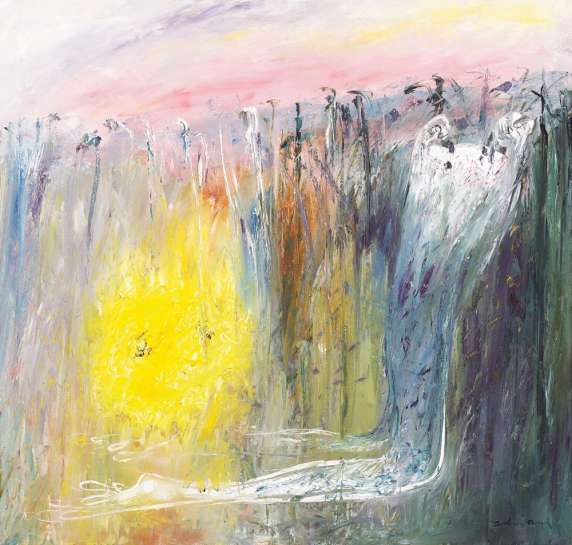 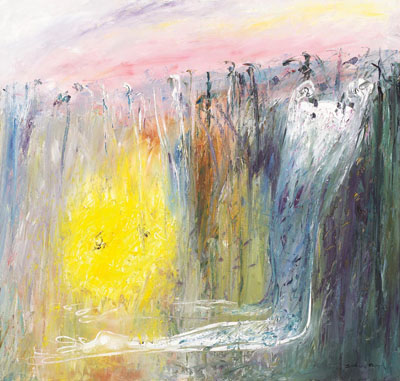 In the late 1960s Arthur Boyd commenced a series of paintings to illustrate a text by historian T.S.R. Boase on the theme of Nebuchadnezzar, the ancient King of Babylon. Boase examined historical and biblical sources that describe the story of the King who, according to the Book of Daniel was punished by God for his greed and immorality by being cast out into the wild. Here he descends into madness and became half-beast half-man, before eventually finding redemption. Having commenced this impressive series in 1966, 34 paintings from it were published in the 1972 book authored by Boase.1 Nebuchadnezzar with Lion’s Head was executed during the period when Boyd was fully engaged with the theme.

Rather than glorifying Nebuchadnezzar’s achievements Boyd chose to focus purely on the king’s degenerative experiences in the wild.2 This was a rich source of inspiration for the artist, who had already employed biblical subjects as a framework to create deeply expressive and original paintings. Boyd’s prolonged engagement with Nebuchadnezzar’s tale resulted in a significant body of work characterised by its frenzied energy, vivid colour and profound symbolic permutations through which he describes altered psychological and spiritual states.

The recurrent motifs that populate this series all move through a visceral process of transmutation. Black crows, rams, lions, the primordial Australian landscape and the king himself are not consistently depicted in the same form; rather their physical transmogrification reflects the king’s mental deterioration within the wilderness. Boyd powerfully evokes this internal process without providing a direct narrative sequence.3

Nebuchadnezzar with Lion’s Head bears a notable resemblance in composition to Nebuchadnezzar Wailing in the Wilderness (Boase, pl.9). Alongside this image Boase annotates the painting with a section of biblical text from the Book of Daniel; ‘The same hour was the thing fulfilled upon Nebuchadnezzar; and he was driven from men and did eat grass as oxen, and his body was wet with dew of heaven, till his hairs were grown like eagles feathers and his nails like birds claws.’4

In both works the king is depicted in white resting on his knees with arms outstretched and hands clenched, though in Nebuchadnezzar Wailing in the Wilderness blue feathers protrude from his back. In the current work the presence of faintly discernible feathers may reside in the dark paint strokes on the king’s torso, their dissolution perhaps suggesting a stage along his anguished journey back to sanity.

According to legend, Nebuchadnezzar was often accompanied by a lion that he tamed.5 However, in Boyd’s series the lion often appears as a menacing force, threatening the exposed king with outstretched claws. In the current work the fierce energy of the lion has shifted. Its disembodied head is removed of all aggression and hovers alongside the kneeling figure, as if providing solace.

This placid depiction of the lion shares similarities with Lion’s Head in a Cave and Rainbow (Boase, pl.40), where the beast is transfigured into a silver orb that glows alongside a rainbow, which according to Boase signifies hope.6 In both works this gentler portrayal of the lion is indicative of a progression towards sanity, as the beast becomes more akin to Nebuchadnezzar’s once tamed companion.

In this painting as in all Boyd’s Nebuchadnezzar works, the artist reveals an empathetic and emotive response to a harsh tale of moral instruction, giving compelling form to universal human frailties.