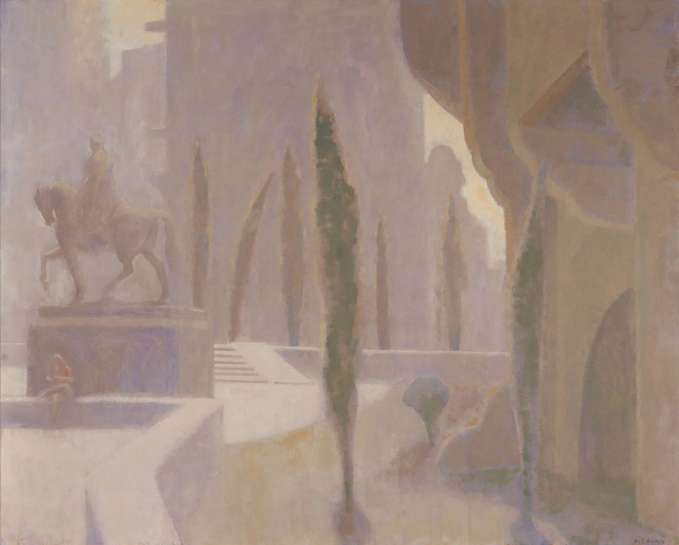 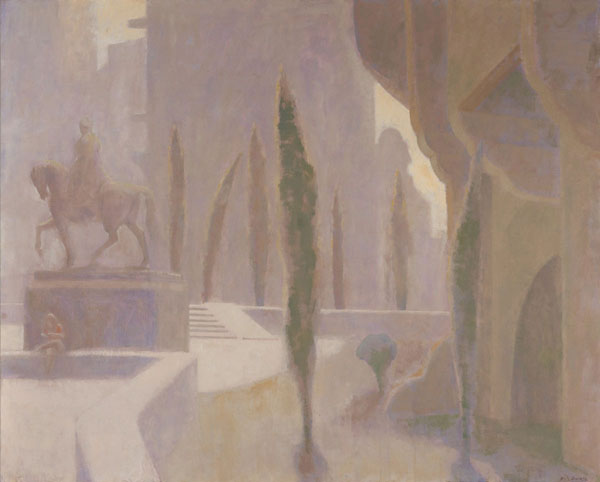 In early 1991 Rick Amor was awarded the Visual Arts and Craft Board’s studio in Barcelona.  As a keen admirer of Pablo Picasso (1881-1973), Amor was thrilled to be visiting the city that had nourished this artistic hero of his youth, even citing Barcelona’s Museo Picasso in his application. Amor spent his three-month sojourn producing sketches and watercolours that he would later develop into paintings upon his return to Australia. In his final report to the Australia Council, Amor remembers his daily routine in Barcelona with fondness:

The rhythm of life in Barcelona dictated my working procedure. I would go out in the morning, and make notes, sketches and watercolours, visit galleries and museums, have a siesta then in the evening work the sketches into more detailed pictures.1

The vibrant, sunlit city of Barcelona presented a predicament for Amor, whose artistic style is characterised by enigmatic scenery of moody Melbourne. In a letter on 6 August 1991 his wife wrote, ‘Rick is struggling a bit to get [the city] onto paper without being picturesque. The result is a somewhat gloomier view than most Catalans would have of their sunny city.’2

Despite exploring Barcelona’s grittier fringes, the sites that proved most fertile for Amor were the older, central parts of the city. Perhaps the most fruitful of these was Plaça Ramon Berenguer el Gran, a small historic square just a ten-minute walk from La Rambla, the city’s bustling main pedestrian thoroughfare. The square is home to a life-size bronze equestrian statue of Ramon Berenguer III the Great, who was the count of Barcelona from 1097, aged fourteen, until his death in 1131. The original plaster cast was created by Catalan sculptor Josep Llimona (1864-1934) and won a gold medal at the Barcelona Universal Exposition of 1888. The present bronze was sculpted by Frederic Marès (1893-1991) as a replacement after damage to the original, and was inaugurated in 1950.

Amor first depicted this statue in a gouache on 8 July 1991,3 and then produced two etchings of the same subject: Cypresses Barcelona 1991 and Plaça Ramon Berenguer el Gran Barcelona 1991 (an example of each is held in the collection of the National Gallery of Australia). These etchings in turn provided the basis for the present work, which art critic Gary Catalano describes as, ‘a light-filled, magical and evanescent painting.’4 Painted in Australia in the first two months of 1992, the work is an effortless coming together of Barcelona’s warmth and majesty and Amor’s characteristic sense of eerie ambiguity. While the palette remains typically subdued, the tones are much paler and warmer than his Melbourne pictures. The longer one gazes at the work, the stronger the architectural structures become, emerging from the ethereal light and impressing their ancient weight on the viewer as the eyes adjust to the subtleties of Amor’s palette.

Interestingly, the figure sitting on the retaining wall directly below the statue does not appear in any of the preceding studies. Incorporating a lone figure into his compositions that are otherwise dominated by hulking architecture is a device often employed by Amor to add a further layer of intrigue and a certain humanism. When speaking to journalist Fiona Moore about his Barcelona paintings Amor stated, ‘there are people in the pictures but they are meant to be mysteriously removed in some way, drifting around in the light, caught in the shadows.’5 We see this cleverly executed here, with the inconspicuous figure simultaneously trapped within the shaded rectangle of the statue’s base, yet elevated by the sunlight illuminating the top of their head and limbs, imbuing the figure with far more life than the stagnant statue above.

ALL CURRENT & PAST CATALOGUE WORKS BY RICK AMOR 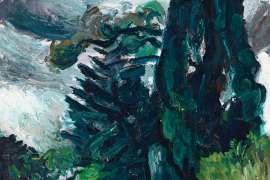 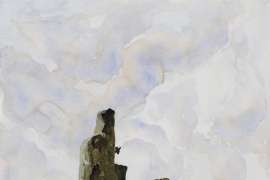 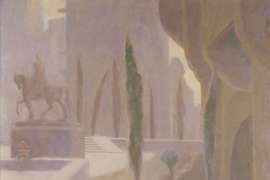 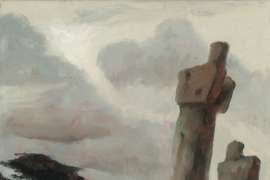