Potter and wife on Beach at Arthurs Seat c.1968-69, celebrates Arthur Boyd’s rich and evocative family history that informs his artistic output and philosophy along with the significance of place of Victoria’s Port Phillip Bay and Mornington Peninsula.

Arthur and Yvonne Boyd returned to Australia in 1968 having spent the previous nine years living in England. Boyd returned with the mantle of a triumphant hero with the launch of Franz Phillip’s much lauded monograph and high prices being realised by the sale of his paintings – Boyd was the ‘young’ man from the Antipodes made good. He chose the characteristic, unassuming option: he kept a relatively low profile and caught up with family and old friends and re-visited familiar haunts along the coastline.

This five-month visit rekindled Arthur’s memories and strong affection for his parents, Merric and Doris, who had died within a year of each other in 1959 and 1960. Through the rediscovery of Merric Boyd’s drawings, stored under the stairs at Guy Boyd’s Brighton home, Arthur recognised a kindred spirit and the great affinity they both shared with their art. Arthur returned to places closely associated with his parents such as the now demolished family home at Murrumbeena as well as the beaches along Port Phillip Bay ‘going to places like Rosebud and around the sand flats where his parents had courted’.1

Arthur Boyd was aware of family stories about Merric’s legendary attempts to woo Doris in marriage. Merric would ride all night from the farm at Yarra Glen to arrive early in the morning to greet her at the Gough’s humble Rosebud cottage.2 ‘The Potter’ series of paintings (that collectively referred to his father’s creative occupation) grew out of just these sorts of family stories. They are, as art historian Ursula Hoff has succinctly put it, ‘intimate and autobiographical … poetic evocations of the early life of Merric and Doris’.3

Potter and Wife on Beach at Arthurs Seat c.1968-69, is one of several key paintings of the period that focus on the coupled form of Merric and a flame-red haired Doris. Their passionate embrace literally merges into the surroundings. Although the setting is the tidal flats near Rosebud, at the base of Arthurs Seat, the scene is a composite landscape that evokes other nearby landmarks as well as a variety of earlier motifs.

The subterranean, marine green palette has been rubbed on and buffed back smooth by the artist and is reminiscent of a bay-side beach with its flat expanses and gently receding tides. One can almost smell the seaweed clad rocks and sea grasses left exposed after each tidal surge. The scrubby foliage is equally reminiscent of the Rosebud area as well as recalling the coastal wetlands that attracted Arthur Boyd to buy land at nearby Hastings on Western Port in the 1940s. Both places brought into his art the themes of love, vulnerability, unbridled passion and impending threat.

At Hastings, Boyd painted a series of lovers in a boat, with the black swan of trespass flying ominously overhead. These were a reflection of Boyd’s own fears of his relationship with Yvonne being catastrophically disturbed. In Potter and Wife on Beach at Arthurs Seat the swan is grounded and is more a benign presence than a threat. However the familiar presence of the hybrid ramox in the bushes – a potent sign of sexuality and intent in Boyd’s art – provides an unsettling atmosphere that signals base passion and animal instinct.

Works such as Potter and Wife on Beach at Arthurs Seat fulfil Boyd’s ambition of creating memorable images that combine a range of times, places, observations and incidents in the one work. The Mornington Peninsula provided a fertile base for Boyd to explore familial concerns and his facility with oil paint and brushwork in a much loved and traversed terrain. These Potter works are paintings of dawn and dusk – memorable for their languid stillness and a sort of faraway quality that serves as a visual reminder of the transition of nature and of people’s lives. 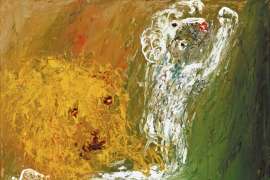 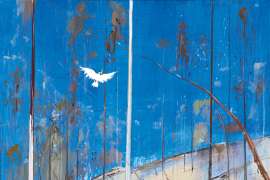 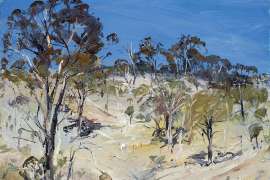 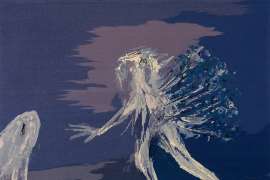